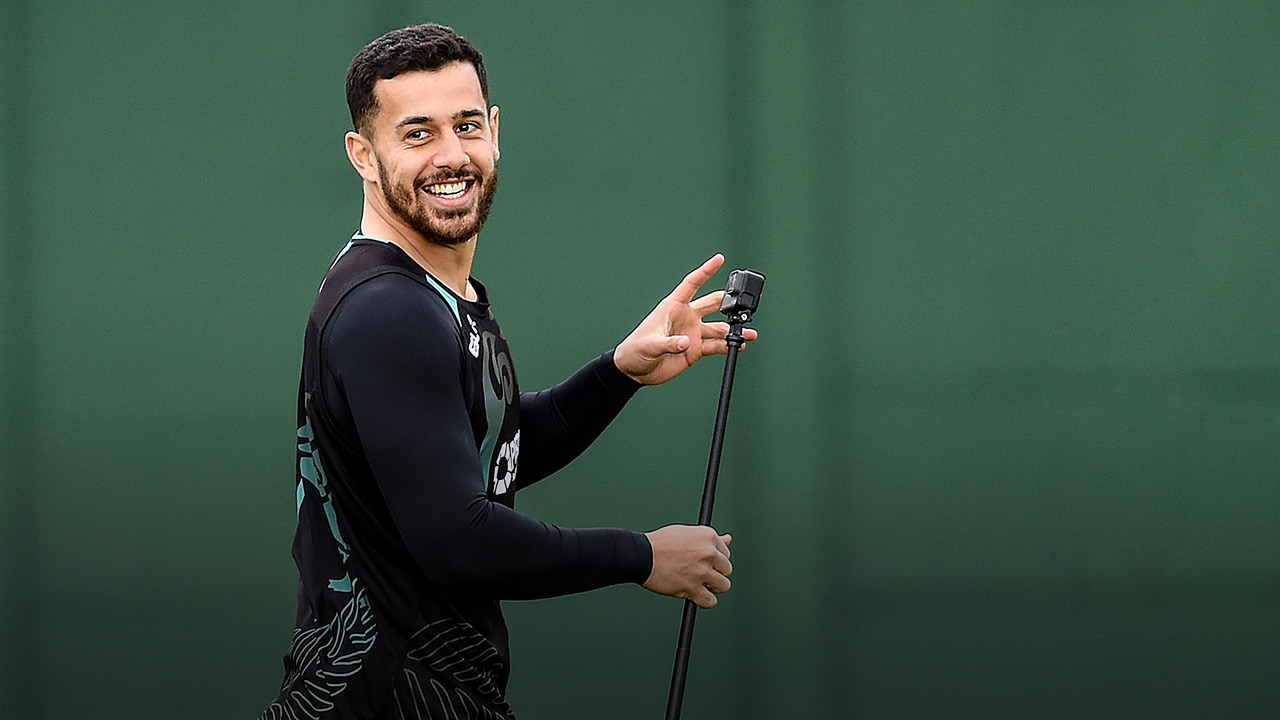 I enjoy writing. It has always been a creative outlet for me, a way to clear my head and get things off my chest.

I wrote many poems as a kid growing up in Alicetown, Lower Hutt.

I’ve never really told anyone this, but when my parents split up I wrote a poem to my Mum, Marg.

I was quite an angry young man about it at the time. I think I was 15.

The poem was about two pages long. It contained my raw feelings and was addressed to her at that particular time. I didn’t take long to write it, just one draft copy and that was it.

As things turned out, I never gave it to Mum – I was just a kid venting. It was a private thing. Self-therapy. I didn’t know a better way.

The marriage separation was dramatic for a teenager. That’s just how I dealt with it then and there. Over time, I developed a lot of respect for my parents and what they decided to do.

I still have the poem. Only my partner Jess has seen it.

I don’t regret writing it, but I have grown up a lot since that happened in my family life.

I like the cathartic side of writing, but also documenting certain periods of my life in the same way photos do, but with greater detail.

I have built a website where I post blogs, the occasional verses of poetry and more recently, vlogs, which I shoot and edit. The idea came to me while I was sitting in a hotel room in London ahead of the World Club Challenge.

I recently told Jess that if I died, these blogs would be a good way for our kids, Jayla and Jude, to grow up learning something about me, and what sort of person I had been, instead of hearing stuff from other people.

I once wrote a letter to my 13-year-old self and it changed my outlook on life.

That letter was intensely personal and private. It was inspired by something I read online by a Swedish ice hockey player. His name is Henrik Lundqvist, goalie for the New York Rangers in the NHL.

I recently told Jess that if I died, these blogs would be a good way for our kids, Jayla and Jude, to grow up learning something about me, and what sort of person I had been, instead of hearing stuff from other people.

My letter is pretty much a summary of my early life in New Zealand and a window into what was to come.

Here are a few excerpts:

‘When you go home you’re still a kid, not an All Black yet. So, do the dishes and make your bed every morning. Help Mum with dinner from time to time…

‘At 16 you’ll meet a girl. You will fall deeply in love. You’re going to need her, believe me…

‘Your parents will get divorced and your world will seem like it’s coming to an end, it isn’t…

That letter gave me a special perspective. It helped me look at the big picture of my life.

ALL BLACKS & A DIFFERENT PATH

I grew up dreaming of representing the All Blacks. Almost every kid across the Tasman does.

Lima Sopoaga was my best friend growing up in Alicetown. We lived in the same street, played rugby for the same college and club team. We shared the same dream.

Lima has since established himself as an important member of the All Blacks team and I am so excited for him. Every time he plays I am so proud.

I am extremely happy playing league for the Brisbane Broncos and New Zealand but, at the same time, I am living my boyhood rugby union dream through my great mate.

I’ve had a tough road to get where I am today. I’ve had some pretty major injuries, especially with my knee.

Writing has become a form of therapy – getting it all out there, sharing things I have never shared before.

I like to think it helps people who are going through similar things, or even something completely different. Some of them might just be searching for a little pick-me-up. If sharing my experiences achieves that, then it was all worth it.

My first ever blog was about my knee. I wrote a few paragraphs, then more and more. I couldn’t stop. After several operations and countless hours of rehab there was plenty of material to work with. I wrote about the physical pain but, perhaps more importantly, the mental side of it and how I responded.

There was no filter. It’s how it really was:

‘My head was all over the place. I wasn’t sleeping at nights due to the fact that I used to think too much. Am I wanted? Do people love me? Have I even got what it takes to be a footballer? I didn’t trust myself nor did I trust the people closest to me who deserved it the most.

‘Some occasions I would bottle it all up and when I drank it all came out. Every time I used to fight with Jess all I wanted to do was die. I was lucky she was stronger than I was and talked me out of a lot of places I wouldn’t come back from.’

Jess has loved the idea of me writing and building my own website. She fully supported me, as she always has, which means the world to me.

We’ve been side-by-side for ten years and she has stuck by me through everything. And, we have been through a heck of a lot.

Writing has become a form of therapy – getting it all out there, sharing things I have never shared before.

I guess we’ve done everything in reverse – had the kids first and soon we’ll be looking to buy a house. We recently got engaged so marriage will be the next step.

We first met face-to-face out the front of Westpac Stadium in Wellington and started dating about six months later. After doing a year of long distance, when Jess finished school she came straight over to Australia to join me, working in retail and later real estate.

There are many, many things I love about Jess. She cares so much for people and has incredible empathy. When they are going through tough times, she kind of feels the pain with them. She will stand by them and make sure they are right before she is.

Jess is an awesome Mum. We weren’t planning on having kids at the age of 24 but she just took it all in her stride. Me? I didn’t have a clue what to do!

As soon as Jayla arrived two years ago, Jess somehow knew everything about looking after a baby straight away. She has been wonderful for our two kids.

Our baby, Jude, just turned six months old. You can definitely see Jess’ gentle side in both of them.

Through your eyes I see the stars so bright, the moon, and the darkness of night. I see butterflies and flowers that dance in the breeze. I see the wind as it blows, and the leaves fall, the newness of snow, the glory of it all. All of this so day to day, but through your eyes it all seems new. So when life starts to get me down, and things start to give me trouble…through your eyes I'll look, my child. For you see life like no other. ?? #jflay23

A POEM FOR THE CRITICS

I completed a small business course last year and it hit home that maybe I should get myself out there a bit more – to show I’m more than just a footballer who runs around for 80 minutes every weekend. I’m not a great public speaker, but I do love writing.

So, I got started posting my blogs and poetry. One of the early things I published on my website was a poem. It came about after I got publicly smashed for a couple of things that happened on the footy field.

On the first occasion, I converted a try in the dying stages of a game against the Roosters which would have taken us through to the semi-finals, but my kick was beaten by the shot clock by a second. We were subsequently knocked out and the Roosters ended up winning the tournament.

On the second, we were playing against Canterbury in a regular season NRL game and I charged onto a Bulldogs short restart to score what I thought was an opportunistic try. Instead, I was ruled to be inside the ten metres and penalised. We lost the game.

The criticism stung me a bit, so I decided to write a poem titled, ‘I’m a person like you.’

‘I am a person who makes mistakes too.

‘Don’t be quick to criticise because I’m very similar to YOU.’

The poem wasn’t written out of anger. That’s not me, not my style.

I just wanted the social media critics to realise that we, as footballers, are human. I wanted people to understand me. I thought, ‘What calmer way to get my point across than by delivering it in verse?’

F R I D A Y – Happy to be alive, have a healthy and beautiful family. I’m not the religious type but if you are up there my man, THANK YOU. #jflay23

I’m excited to be moving into videos with the vlogs I’m producing for my website.

I’m learning new things every day about how best to put them together.

I recently uploaded one from our recent family holiday in Queenstown. I’m biased, but I think it came together pretty well. Much of it was filmed with a drone I borrowed from a Kiwi mate, who makes films for a living.

To be honest, I was a bit nervous at first – ‘Please don’t break it!’ – but I quickly got the hang of things. Queenstown laid on some pretty spectacular footage from the air as well as from ground level.

It was a great experience. It’s crazy what you can do with technology these days. And for someone like me who likes to try new things and be creative, I was hooked.

Drones can be pretty expensive and there are a lot of different types, but one day I’ll buy my own for use on the website. Maybe I should try and win some man-of-the-match awards to pay for it.

That’s the next step.