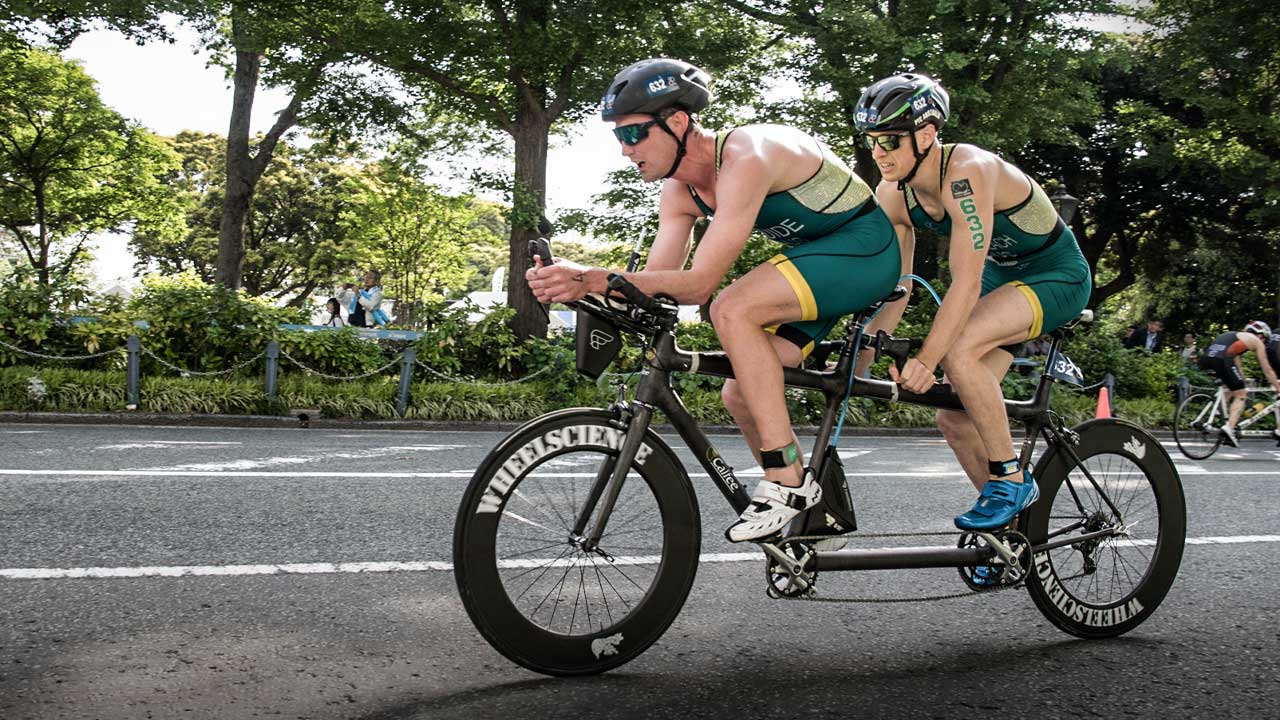 Triathlete who had to learn to swim

Triathlete who had to learn to swim

It takes a village to get an athlete to the top.

It’s about the support network you have, from your national sporting organisation, to your family, to your friends, to your coaches, to your physio and plenty more. You can’t do it on your own.

Most people are going to say that their mum is their biggest support. And that’s true for me. Her and my pop.

My mum raised four kids on her own. It was a very challenging upbringing. We didn’t have much; wore hand-me-down clothes.

In retrospect, we wouldn’t have had it any other way, but it was a really tough time for her and us.

As a kid I was obsessed with tennis and she still supported me despite the cost. Tennis was probably one of the worst sports to pick because of the expense. Maybe athletics would have been a bit cheaper, just a pair of running shoes.

Mum has always backed me, even when times were tough. She never had a driver’s licence so we relied a lot on my pop, who was basically like a dad to me.

Pop drove me everywhere. He took me to tournaments, was always the first one I’d see at the end of a training session.

He was always the first one who asked me how it went and was always so enthusiastic. Still to this day, he is one of the first people I call to tell how I’ve gone at a race or how a training camp went, or how work’s going or anything. He is my best friend.

Often when I’m racing, I’m doing it for him and mum because I appreciate everything they’ve done for me over the last 30-odd years, helping me continue to follow my sporting passion.

THAT’S COMEDY FOR ME

I have Usher Syndrome which is very rare, I think around one in 400,000. It’s a combination of a vision impairment and hearing impairment.

There are different types of Usher Syndrome, or the Usher gene. Some lose their vision really quickly, at a young age. For many people with Usher, it’s a case that you have a moderate amount of hearing loss, you wear hearing aids as I do, and you’ve had hearing loss since you were born.

The vision impairment side of the condition often isn’t noticeable until you’re in your teenage years. So I wasn’t diagnosed with the vision loss, and therefore Usher Syndrome, until I was about 15.

The vision loss generally means that you lose your night vision by the time you’re about 18, along with your peripheral vision which continues to deteriorate as you get older.

By the time you’re in your 30s, you tend to have anywhere between five and 10 degrees of peripheral vision.

Looking straight ahead, I can still see really well at this stage but peripheral vision is an issue. I can’t drive, I need to get my cane out when I walk around in busy places like airports, just to let others know I can’t see well.

Most people will see a cane and they think, ‘That guy is blind, I’m just going to get out of his way.’ But they don’t know that I can actually see them getting out of the way. I can see parents grabbing their child and diving out of the way or the guy in a business suit looking at his phone, looking up at the last second when I’m making a beeline for him, diving out of the way.

That’s a bit of comedy for me. You’ve got to have a sense of humour about it. But at the same time, it really helps because when I do bump into someone or they bump into me, I don’t need to stop and explain, they just see the cane and I can just keep charging through the airport to get my bag.

The hearing problems have been since I was born and pretty stable, whereas the vision gradually gets worse. So I’m always having to adapt.

TENNIS GOT ME THROUGH BULLYING

I’ve always been passionate about sport and I played everything under the sun as a kid. As long as it didn’t involve water.

As a kid, I couldn’t swim. I almost drowned when I was about four years old so I had a fear of water growing up. So, triathlon, wasn’t really a sport that I would have been drawn to when I was younger!

I dreamed of being a tennis player. As a kid, I played tennis every day. If I wasn’t on a court, I was hitting the ball against a brick wall for hours on end.

Tennis got me through being bullied in high school. I always knew I had tennis to go to at the end of the day.

And being an individual sport, it was something that I could push myself in and could focus on. I didn’t have to rely on anyone else.

I guess I was bullied because some of the other kids felt threatened by me in some way. Wearing hearing aids throughout primary school and high school didn’t help.

I was competitive and good at sport. Unfortunately, I was one of the shortest kids in my year right up until Year 12, so I couldn’t really defend myself that well. When you’re seen as different by kids, they can be pretty nasty and pick on you.

I had to deal with some bad stuff growing up. Sport got me through, gave me a purpose.

When I received my Usher Syndrome diagnosis, standing there with my mum and an optometrist,  I didn’t think about what I was going to do for a job in the future, or if I’d be able to have kids, or even that I might be blind one day.

The first question I asked mum was, ‘Am I going to be able to play tennis anymore?’

Because I love tennis so much, the thought of not being able to play was the hardest thing for me.

That, to this day, is the only time I ever cried about the fact I have this condition. I can’t forget that car ride home, the realisation that mum couldn’t answer the question.

I didn’t tell many people about it. I already had enough bullying through high school and enough attention on me because of my hearing aids. I didn’t need to add to it.

Back then, there was no social media, the internet was brand new, there were no support groups, and you couldn’t just reach out to other people that had the same condition and ask them how they did it.

It was a really confusing time, but in a weird way it might have been for the best. I just got on in life as if I was a normal kid and just didn’t treat things any differently, just hanging out with my mates and doing what most young people do growing up.

You’ve got to have a sense of humour about it … When I do bump into someone or they bump into me, I don’t need to stop and explain, they just see the cane and I can just keep charging through the airport to get my bag.

I was about 15 when I was diagnosed, and I played tennis for three more years.

It was weird. Before I was diagnosed, my tennis wasn’t improving and I was starting to get beaten by guys that had been behind me in the past. And I wasn’t keeping up with guys that were on my level.

At first, I thought I just needed to get more coaching. So mum paid for more, but that wasn’t working.

The diagnosis helped me understand how it was impacting my tennis. It wasn’t a relief, but it was an explanation. I didn’t need the extra coaching.

I’m a real competitive bugger, and I hate losing. I probably didn’t have the best temperament on the tennis court either because I was so passionate about winning all the time. When I wasn’t able to beat guys I could beat before, I pretty much stopped playing. And it took a long time before I picked up a racket again.