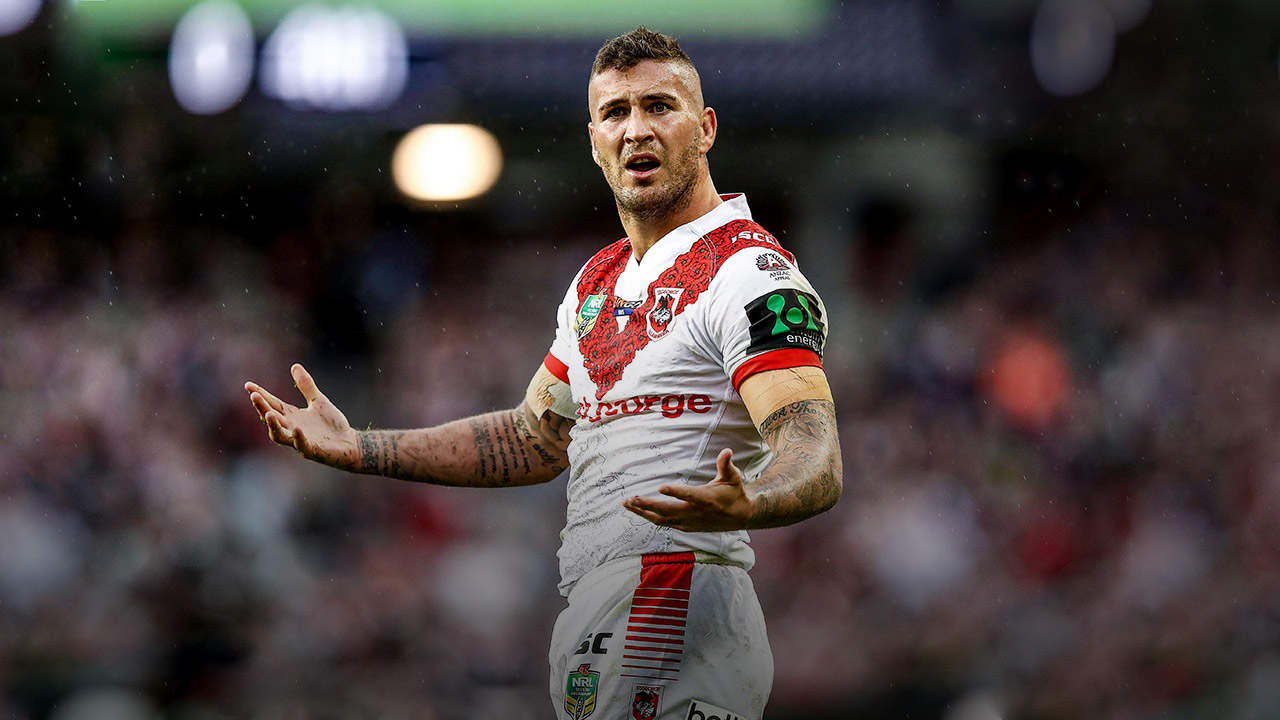 As a young bloke playing football, you feel like you have to be a certain type of man. Strong, confident and in control – that’s the picture you paint for your teammates, coaches, family and fans.

Sometimes, though, what’s inside your head is completely different.

It took me a while, but one thing I’ve learnt during my career is that it’s OK to show weakness. It’s not going to change how you perform on the field and you won’t be viewed as less of a man off it.

This goes beyond footy. We’ve got to change that aspect of our culture where men just say to themselves, ‘It’s ok, chin up, we’ll get on with it’.

Until we change that, we’re going to have these horrible suicide rates.

That’s why it’s important for, not just me, but other people to go out there and share their story. We can show through lived experience that it’s OK to ask for help. We need to break down the stigma around mental illness.

As boys, we’re taught about masculinity from a young age. I was brought up by uncles who taught me not to show weakness and be tough. It’s important we start teaching boys from a young age to show their emotions, talk about their feelings and get things off their chest because, if we don’t, it can come back to hurt people in the long run.

That’s what happened with me but I was lucky to have the support of my wife, Amy. We had a really honest conversation and she pretty much forced me to go and speak to someone.

If I didn’t have her, I don’t know where I’d be or what would have happened to me.

I’ve spoken about it before, but if you’re not aware, I had a pretty turbulent childhood. I saw a lot of violence, a lot of drugs and a lot of issues caused by alcohol. Some of those situations have scarred me.

I come from a small Aboriginal community. I’ve seen the struggles. I grew up with those struggles. I’ve seen everything you can possibly see and I know the fight we have on our hands to improve the situation.

There are kids struggling, kids that are going to school with empty stomachs and without the things they need to do well at school. I know those kids need an extra push. They need mentors and people out there that will give back and help them.

That’s why I feel so passionately about working in the community. I’ve been in the trenches, where those kids are. For me to turn the other way and not give back … I couldn’t live with myself if I did that.

It’s important we start teaching boys from a young age to show their emotions, talk about their feelings and get things off their chest because, if we don’t, it can come back to hurt people in the long run.

That’s the thing about rugby league players. They never forget their roots or where they come from. I’m no different.

I moved around a lot growing up. I lived in Gundagai, Wagga Wagga, Condobolin, Griffith, Forbes and Ivanhoe. I spent a lot of nights sleeping on couches because for a long time there wasn’t really any one place that I could call home.

I lived with my Mum up until I was 12 or 13 and, I won’t go into what happened, there was a time I had to escape that household. I went and stayed with my Nan in Ivanhoe.

I still got up to no good. I’d be doing the wrong thing, getting in trouble with the police, but my Nan showed me love. She gave me care and some guidance to help me turn my life around. That’s all I needed.

Nan the one person who never gave up on me growing up. Showed me the love & guidance I needed to chase my dreams. #womeninleague @RLPlayers pic.twitter.com/4LyD05ji6B

She helped me get into boarding school at Red Bend in Forbes. I didn’t fit in as your typical Catholic boy. I came from a totally different background and environment to everyone else, but that move put me on the path to playing footy.

I had to learn to tow the line, how to wear the correct uniform, how to be at a place at a certain time, how to do homework – all these things I’d never done before.

It helped me. A lot of good people there helped shape me into the person I am today.

That was my childhood. But I didn’t want to be a victim or someone that goes, ‘Poor me’. I want to use it in a positive way and that’s by helping others.

I went through a lot as a kid but it wasn’t until I was 19 or 20 that I really started struggling with my mental health. I’d just arrived in first grade and was playing for Canberra. I didn’t want to show my teammates that I was weak. I didn’t want to look like someone who was having a sook or had to ask for help. I kept it bottled up.

As I grew up, I started thinking about my upbringing a lot. The stuff I went through had come back to hurt me.

I was also dealing with the pressure of being a professional footballer in the NRL. I felt the pressure of playing at the highest level, injuries and coming into money at a young age. I was going out to drink after losses, feeling pretty horrible. I was making some bad decisions.

I used to numb my emotions. I’d drink to try and block them out and not think about it.

That’s just escapism. People often fall into bad habits when they can’t deal with things – whether it’s alcohol, drugs, gambling or something else.

I’ve realised that there are other ways to deal with your problems. Sooner or later you have to confront them head on.

I’ve spoken about it before, but if you’re not aware, I had a pretty turbulent childhood. I saw a lot of violence, a lot of drugs and a lot of issues caused by alcohol. Some of those situations have scarred me.

I’m very fortunate that Amy came into my life, she’s been massive for me.

I reached a fork in the road about six years ago. Amy had a really honest conversation with me. I remember her saying, ‘This isn’t OK how you’re treating yourself. You’re not going to be with us anymore if you’re not going to go and get the help that you need.’

Amy took me to speak to someone. It was the first time I had cried in a lot of years and it was to a stranger.

I opened up about what was going on and how I was feeling. I spoke about the downward spiral I’d been on and it changed my life. The counsellor gave me some tools to improve myself and helped identify things I shouldn’t do so I could look after myself a bit better.

That decision, to go with my wife to that appointment, probably saved my career and it might have saved my life. It put me in the position I’m in now.

If our culture was different, I might not have waited for so long until I asked for help.

You are truly a special woman that has saved me and my career on many occasions.. Without a doubt , I wouldn't be where I am today without your love and support.. You deserve a round of applause ?? ?? #womeninleague #powerinnumbers #rlpa @rlplayers

I never intended to share my story. I wanted to keep it private but Amy and my counsellor encouraged me to put myself out there.

I can’t change my upbringing and everything that happened to me. But I can use my story to help others.

Sharing it is such a raw experience. People connect with that honesty straight away and you are an example that things will get better.

That’s what I’m passionate about. I want to inspire others to do the same. Giving back to the community has definitely helped me along the way, too, with my own journey.

I’m proud of the work we’ve done, especially with the NRL’s State of Mind program.

It’s powerful what the NRL do. The feedback has been really positive. It’s also about showing them that they shouldn’t be ashamed about asking for help.

The Albion Park Eagles were the first club to complete the State of Mind campaign.

They are a club in the Illawarra who lost a young girl to suicide only a couple of years ago. It was still really raw for them but they wanted to get on the front foot and make sure nothing like that happened again.

I did two of the sessions and it was pretty emotional. I was proud to be a part of their club. They put things in place and put education out there for all their staff and juniors.

It also hit really close to home because I lost a cousin to suicide almost two years ago.

It hurts thinking about it because he was a champion bloke. We had grown up together.

He followed my career the whole way. He would always message me and be supportive. He was a diehard Raiders supporter. He absolutely lived and breathed rugby league.

I was in Wollongong when I heard the news. It breaks your heart to know that someone you know and care about was suffering and they got to the point where they couldn’t handle it anymore. It was out of the blue. No one saw any warning signs.

I’ve been in a situation where I struggled and it hurt but I was lucky enough to have my wife come along and push me in the right direction.

That decision, to go with my wife to that appointment, probably saved my career and it might have saved my life. It put me in the position I’m in now.

I immediately wanted to go out to Albury, where he lived, to see my family. But I also wanted to go out there to help others in memory of him. I wanted to share my story at the schools and do what I could to provide some information and awareness.

I teamed up with Headspace and we went and spoke to nearly a thousand kids.

Suicide is a huge problem in our society and especially in Indigenous communities, where the rates are some of the worst in the world.

We have young kids, 13 or 14, who are taking their own lives. It’s important to get out there, provide education and give resources to some of the small communities.

We’ve got to normalise conversations about mental health.

It’s just like any physical injury. You have to go treat it. Your mental health is just as important as your physical health and it’s important to get out there and take care of it and do the right things.