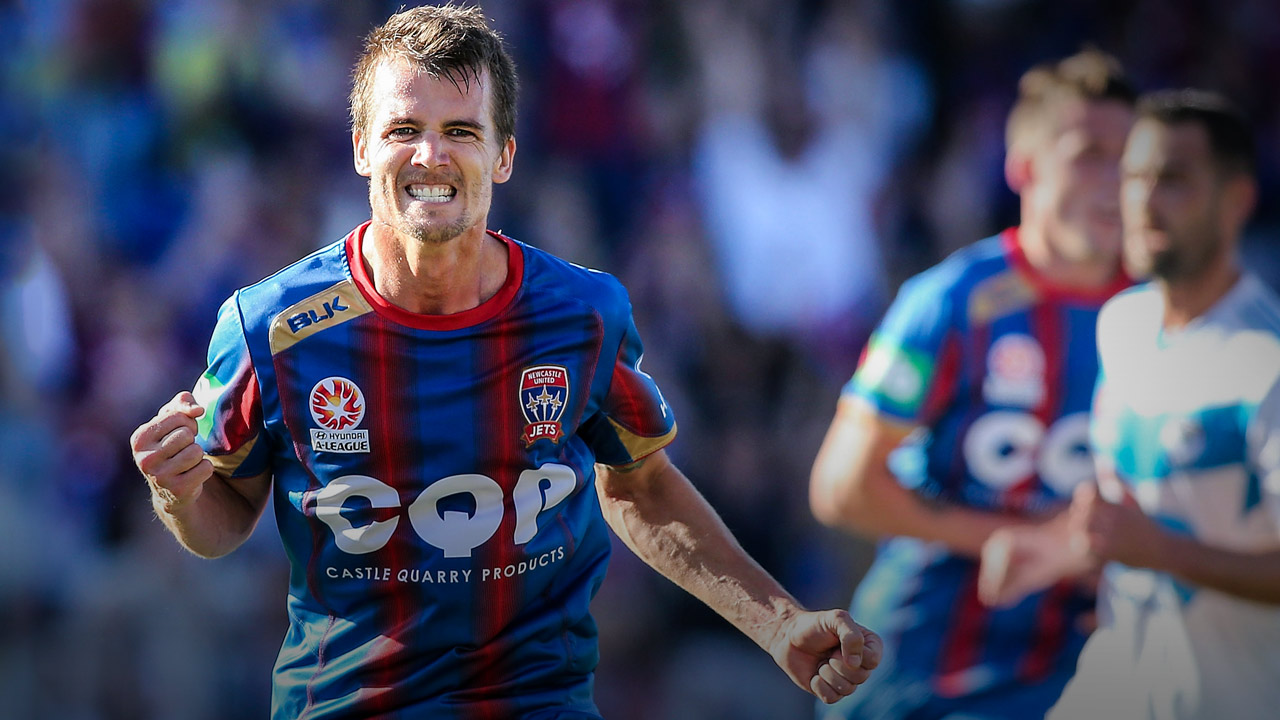 Tinkler turmoil to the GF

Tinkler turmoil to the GF

Riley McGree got a package delivered from Nike this week, I assume it was boots. The delivery guy announced: ‘We’ve got a package for the Scorpion King!’ I thought that was quite funny.

Riley, still just 19, created a moment that’s gone viral across the world with that goal – I’ve heard 10 million views or something ridiculous. But he’s a level-headed kid and we have enough leaders in our team, guys who have been in big games before, that we’re in good hands for the A-League grand final week.

And Newcastle Jets are now in a good place as a club, coming off a wooden spoon last year, nine seasons without a finals appearance and some well-documented bad ownership. Now, we have a sold-out grand final at our home stadium and the chance to add to our only championship: the 2008 title I was lucky to be a part of. Phenomenal.

It’s been a rollercoaster to get here. Now the club’s football operations manager, I’m in my fourth stint with the Jets after three as a player. Every week, we’ve got to continue to improve and not make the mistakes of previous ownerships. The best advice anyone’s ever given me: if you lose, at least learn the lesson.

Goal of the year? ??? @newcastlejetsfc @rileymcgree

Con Constantine was a fantastic owner for the club in its early days, right back to the NSL era, when I was first there. I owe him a lot personally, for what he’s given me. Though we did have one clash, during my second time at the club.

I asked Con if I could be granted a release to join Beijing Guoan, after a loan stint with them in the Chinese Super League through 2009. Con agreed. But there was an injury to one of the Jets’ foreign players after that and I would say Con reneged on his word. That’s when I got upset.

He put a transfer fee on my head for a ridiculous amount. I was fighting against that, trying to leave – and it didn’t help with losing most of the championship team and the coach through that period around 2010. I was frustrated with the direction the club was going. Eventually, I moved to Beijing.

Now, if I could see Con, talk to Con, invite him up to some games, I’d be all over that like a rash. Con … it always depended what Con you got, whether it was sober Con or with a few whiskeys under his belt! Most of the time, I got him with a few whiskeys.

But he was a very happy owner. He loved his club, loved his town, loved his football, and I always respected people like that. Especially when they’d thrown a lot of money into the club, that goes a long way.

I wish Con, who was stripped of his licence by Football Federation Australia in 2010, all the best. I wish that he could share this success with us, because he’s been a big part of the Newcastle Jets.

The best advice anyone’s ever given me: if you lose, at least learn the lesson.

Nathan Tinkler, Con’s successor, was the opposite. I’m fairly good at reading people – I think he had hidden agendas. He did come across as the white knight that saved the club but I think we would have had an owner anyway if it wasn’t for Tinkler.

Tinkler was close to the coach at the time, Phil Stubbins, something I didn’t know until afterwards. We lost 7-0 in Adelaide during January 2015 and, in the dressing shed, there were all sorts of fights; not with players, but the coach and a few players. I saw this happening. There were threats being made.

It was a shitshow, to be honest. It was fucked. I didn’t enjoy it at all.

Then I got a call from Nathan the next day and he said: ‘What’s going on?’ I was honest with him. I said: ‘Listen, the dressing shed’s gone. I’m happy to play, I’m going to play regardless of what I think, because I don’t really care – I just want to play’. That was it. He said: ‘Thanks for your honesty’.

He hung up. I was sacked the next day, one of five players shown the door. He didn’t even call me.

I think his theory was to cut off the head of the snake, get rid of every big voice in the dressing room – though I didn’t even have a loud voice then, that was the thing. I was telling people to calm down! That’s why it was so disappointing.

Anyway, that’s history. And Tinkler was stripped of the club licence a few months later.

In that last stint as a Jets player, I always doubted Tinkler once I knew that he had no idea about football. After returning to the club as an official, I also questioned Martin Lee, the Chinese billionaire and CEO of Ledman Group, after he got announced as the new Jets owner in a sale from Football Federation Australia.

But then our CEO Lawrie McKinna and I got invited to China to meet Martin and see his company and staff. He had a shrine on the ground floor of his complex, where he’s got thousands of people working for him. A shrine completely dedicated to football.

He had Real Madrid jerseys, Liverpool boots, trophies from all around the world. Right then and there, I knew he was passionate about this sport.

He owns a second-division club in Portugal, and a club in China. He loves his football and this was another way of him sharing that.

Tinkler said: ‘Thanks for your honesty’. He hung up. I was sacked the next day.

And the real beauty of Martin: he doesn’t get involved. We all have our roles, Lawrie, coach Ernie Merrick and I, and Martin has probably been the easiest president to deal with that I have known.

He likes feedback on how the team is going, obviously didn’t like that we finished last, last year. Yet even through that, the way he handled himself during that time was fantastic.

He gives us the responsibility where many owners, when the team wasn’t going well, would want to get involved. That’s very important.

Our 2008 team gave me friends for life and I see similarities in this team at the moment. Everyone gets along with everyone, there are no groups, no hidden agendas. It’s a good feeling when you don’t have to manage certain individuals. And 10 years ago, we won it. A-League champions.

Back then, Remo Nogarotto was doing the job I’m doing now. There’s a lot of planning, plus some luck. It’s about signing good characters as well as good footballers. That’s the key.

We had Ante Covic, Jade North, Andrew Durante, my twin brother Adam, Matt Thompson. We had a good mix of guys and all got on really well, which is half the battle in having a strong side.

This squad has depth. This squad has toughness. We lost Vargas to a horrific injury near the start of the season, we lost Andrew Nabbout to a transfer. We had players put their hands up and take their chance – Joey Champness, Ivan Vujica, Johnny Koutroumbis. They are the future.

That 2008 team was so tight that winning the championship was almost just a bonus. The day itself, a Jets win sealed by a Mark Bridge goal, is a blur; I don’t know if it’s old age but I don’t remember any game from my career unless I watch it. It’s a bit of a shame. I remember the bus trip down. I vaguely remember the week after… actually, no, that’s a write-off!

It’s about signing good characters as well as good footballers. That’s the key.

Winning the Johnny Warren Medal and the Golden Boot that season was icing on the cake. It was a season where everything just fell for me. And I got my move to China, where I spent five years in total.

A lot of good things came from that season, as they had previously in Newcastle; I moved to Switzerland after my first stint with the Jets. That’s why I have so much time for the club. It’s given me everything. I am still trying to repay that.

Our coach, Gary van Egmond, was massive in 2008. He really made training enjoyable, he made playing away really entertaining and gave us a sense of freedom, which as striker is invaluable. He got everyone on board.

Merrick, too, is a very good man-manager, which I found when I played for him in Wellington. He can get the best out of players and improve them, which is not easy to do. He’s old school.

During this pre-season, he drilled the players on how he wanted to play and those three and a half months of preparation were relentless. He was just constantly pushing those guys to get better, every day. He deserves a huge chunk of the credit, along with the players.

Over time, it slowly got bigger and bigger, then you got household names when the A-League started. The facilities, the preparation of the players – it’s all come a long way. From when I was playing feels ancient!

Sometimes you have to pinch yourself. Having a grand final in your home town. The way the community has jumped on board, selling out our stadium in a matter of hours, is fantastic.

Our new ownership has brought great stability. Ernie has been fantastic as coach. Lawrie is transforming us into the community club that we’ve always aspired to be. Our players have been magnificent – they make my job easy. We’ve got 19 players already signed for next season.

We can’t wait to see this place full of ?? tonight ?

It’s been a long time coming, having this game here and being a strong, successful club again. Hopefully, Saturday night will be very enjoyable.

My obvious prediction is a Jets win over Melbourne Victory. To get to that prediction, the players just have to back themselves and play to the game plan.

It’s 90 minutes, probably more, and we can all celebrate a wonderful season.