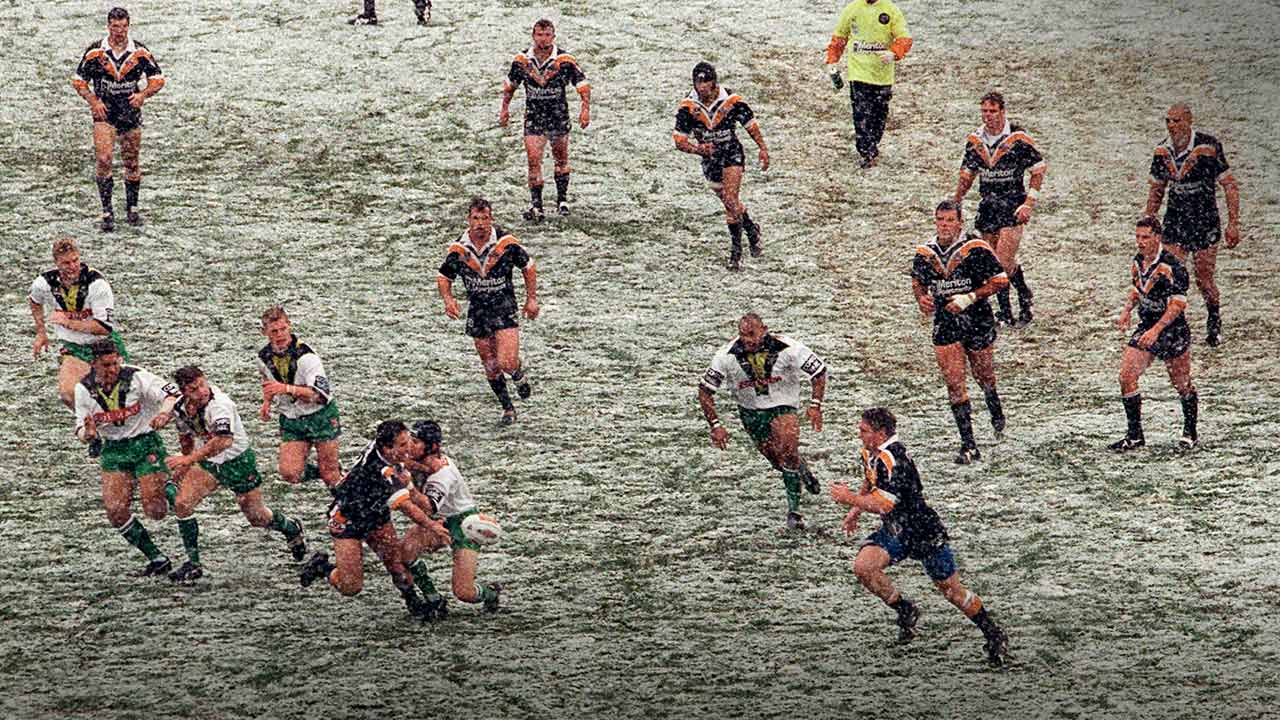 The day the NRL froze

The day the NRL froze

We were quite certain that we weren’t going to be playing.

The clips that are out there show plenty of snow on the ground, especially in the first half, but it was actually much worse in the reserve grade game. So we were really relaxed because we thought there was no way they would make us play.

Funny thing is, it wasn’t even winter yet.

It was NRL round 17, May 28, 2000. The first year of the merged Wests Tigers team. The season was early that year because of the Sydney Olympics in September, and we were very much in finals contention.

In fact, we were second on the ladder when we travelled on a bus down to Canberra.

We had no idea of the weather forecast. I mean, we knew it would be cold already because it was Canberra and only one week before winter, but we never knew just how cold it was going to be.

It really dawned on when we were in the sheds during the reserve grade game and someone said, ‘Come and check this out’. We went out to have a look and we couldn’t believe it. It was a full-on blizzard out there.

When someone told us we were going to play, it was very deflating. We did our warm-up inside the sheds, then out we ran. Looking at the clip now, we don’t look too happy about it!

Have you ever read ‘Lord of the Flies’? The team was like that. We all started to turn on each other because scarcity was a real problem.

I’ll never forget it when we ran out – Kevin McGuinness had this undergarment like a skin garment for his arms with long sleeves. We all looked at him as if to say, ‘Oh, you arsehole, why did you get to have that?’.

It was so cold, and that undergarment was just worth a million dollars at that time.

The ground was totally snow-covered at kick-off, and it was almost impossible to see any marked lines.

I was playing fullback and the problem with that was that the game was so stop-start, your heart rate just did not get up at any stage during the match, which was the worst thing because you needed to keep warm.

So there I was at fullback, just literally standing there freezing my nuts off. I must have looked at the clock four thousand times in that match and I reckon every minute went for about 100 seconds. It was just soooo sloooow. It was literally a form of torture.

I reckon every minute went for about 100 seconds. It was just soooo sloooow. It was literally a form of torture.

Handling was difficult. You couldn’t even feel your hands. Our trainer Andrew Leeds would come on with warm water instead of the usual cold water.

It didn’t really help, though. On one play, I was returning the ball from the in-goal and they knocked the ball out of my hands and scored. If the try had been referred to the video referee, I probably would have just confessed my knock-on to Referee Simpkins to speed up the whole process so we didn’t have to stand around shivering. Actually, I’d be interested if any were referred that day!

If Junior had have decided (which he didn’t) to get the coaches hook out on me, I probably would have had a warm shower, put my Tigers Trackies and Ugg Boots on, and slipped up to the coaches box to give him a big cuddle for his kind consideration.

It's cold today but not as cold as on this day in 2000 when the Raiders took on the Wests Tigers under snow!

I remember lining up a kick from the sideline. I think Laloa Milford may have scored the try and it was on the members’ side. As you can imagine, it was so cold that no one had bothered to go to the game. The official crowd was 7,384 but I don’t know where they were all hiding because it was a lot less than that, I would have thought.

When you get a small crowd like that, everyone’s got the best seat in the house which is on the halfway line. Don’t worry about ticketing, you can just take whatever seat you like.

Usually when you’re goalkicking, there might be 20,000 people there at the ground, and half of them will be cheering, the other half bagging the shit out of you. And all you hear is this muffled sound and you just go about your task and get it done.

But this particularly day, I’m lining this kick up from the sideline and I’ve already talked myself out of the kick. I can’t feel my toes, and when I put my hand on the ball, I vividly remember there was no sense of feel on this ball.

So I’m lining it up, I get back to my mark, and as I say I’ve already convinced myself that it’s not going over. The whole motive of this kick is to not to be embarrassed by it.

And I’m thinking, ‘What the hell are you doing here, mate?’. There’s one supporter on the 20 metre line and he’s leaning over the fence giving me the ultimate spray. I think I may have even said to him, ‘Mate, I’ve already talked myself out of this, I don’t need your assistance’, and sure enough, the kick went nowhere near the posts!

It’s amazing how one voice can be so much more powerful than 20,000, you know?

JOEL CAINE-o vs the volcano

As if the cold wasn’t torture enough, there was a Raiders player called Lesley Vainikolo. He was a New Zealand Test winger who easily weighed 100 kg-plus in an era when very few outside backs were as big as forwards.

He actually scored a try where he slid for about 400 metres, and I must have run into him about five times during the match. I remember him sort of charging towards the line and I just thought, ‘Oh, geez’. It was like the under-18s kid versus the under-7s kid.

At halftime, I think we were about 12 points down and our coach Wayne Pearce said, ‘Get your arses in here’.

Basically what happened was everybody just walked straight past him. It was contagious. You knew you were doing the wrong thing, but you just did it anyway. We took our jerseys off and we went straight into the warm showers.

You knew you were doing the wrong thing, but you just did it anyway. We took our jerseys off and we went straight into the warm showers.

Junior was screaming at us to come back in and no one budged. We just couldn’t bring ourselves to not thaw out in the shower. The idea of having to come out in the second half was just … ugh.

But in a way the showers were the worst thing we did, because temporarily we felt good, then were freezing cold again when we got back out there the second half.

We didn’t hear a single thing Junior said at halftime other than ‘Get your arses back out there’. He probably should have jumped in the showers with us and done the team talk there!

I don’t think there would have been many mutinies against Junior in his career, but it wasn’t anything personal. It was just the cold.

Snow falling at the Raiders v Wests Tigers game at Bruce Stadium in May, 2000.

Posted by The Canberra Times on Thursday, 26 June 2014

The snow on the field melted a little in the second half, but it was still just as freezing. We came back and hit the lead but the Raiders scored with six minutes to go and beat us by two points.

If ever it was a case of local conditions favouring the home team, that was it.

I played a season and a half for Salford in England at the end of my career. We had some freezing cold conditions, but never anything like what we had at Canberra Stadium that day. Definitely no snow-covered fields.

VINTAGE SNOW VIDEO: The only rugby league game in Australia played in the snow was between Canberra and the Tigers at Bruce Stadium in 2000. Brrrrrr….

Funnily enough, one of the players I ended up playing with in England was Sean Rutgerson. He played for the Raiders that day in 2000, and he must be some kind of relation to the Eskimos because he played 68 NRL games and the only try he ever scored was in that match!

The snow game was the start of a horror two weeks for us in the context of the season. The next week we played Penrith and it was one of the greatest NRL comebacks ever. We led 31-8, but they came back and beat us 32-31.

After that, we only won two of our last eight games and ended up missing the finals by just two points. I wouldn’t say it all started at Canberra Stadium on that freezing cold day in May, but it didn’t help.

Meanwhile, I’ve heard it’s going to be bloody freezing when the Raiders host the Tigers in Canberra this Sunday. Good.