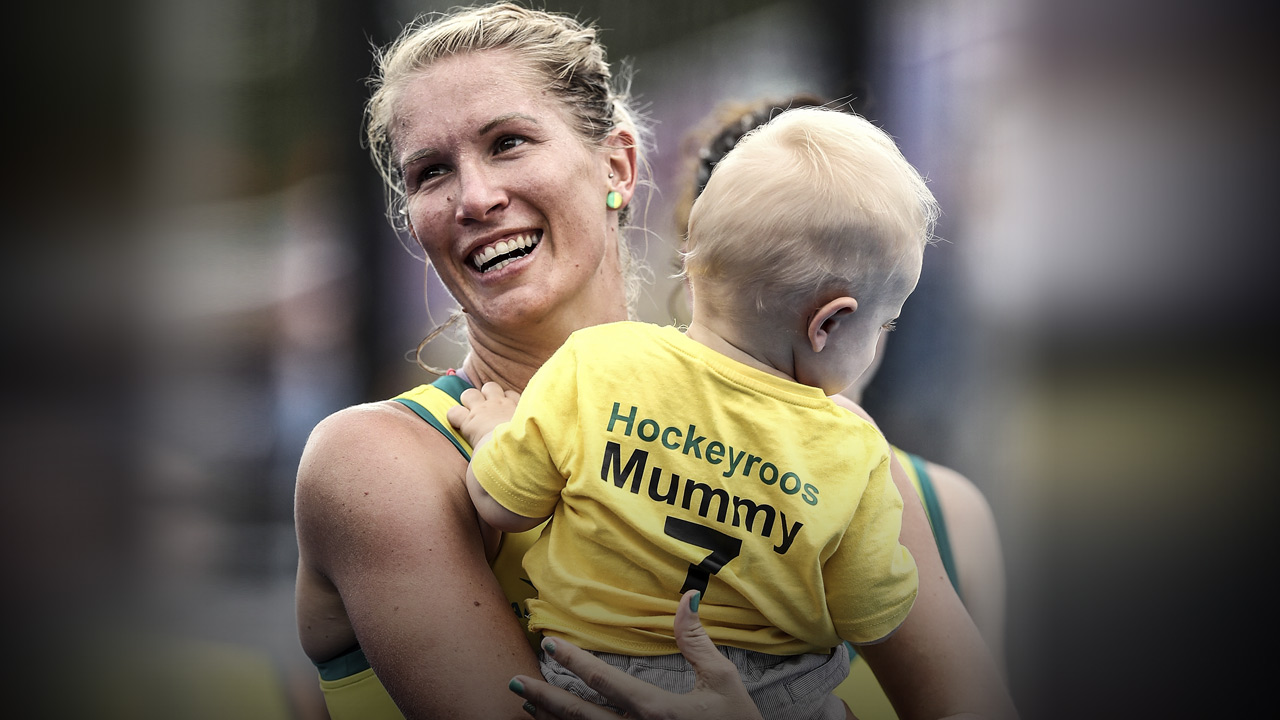 By the time you read this, I’ll have been reunited with Harry.

I’ve been anxiously waiting for my parents to arrive in London today with Harrison, my little boy, after the long flight from Brisbane. We’ve been apart for eight or nine days. It’s hard to be sure exactly how long when you’ve gone to the other side of the world.

I’m looking forward to a few quick kisses and cuddles. I’ve been thinking about it a lot. Harry turned one a few weeks ago. It’s a beautiful age.

And then, I’m off to rejoin the team for the opening game of our World Cup campaign against Japan.

Being a mum and a Hockeyroo is a juggling act, there’s no doubt about it.

I couldn’t do it without the support of a wonderful family. Mum, dad and Harrison are going to be staying at an Airbnb within walking distance of the team hotel, so I’ll be able to spend some time with them.

My husband, Shane, is back home in Brisbane. He still loves his hockey as well, playing for the Queensland Blades in the AHL, but he’s also a car mechanic and couldn’t get time off work to come and watch this tournament.

I miss him terribly and now, Shane has got to cope with both myself and Harrison being away. But for this to work, we all have to make sacrifices. I knew that when I decided to return to hockey after Harrison was born. Shane and I try to meet in the middle and make it work the best we can.

It was never going to be easy. No matter how well you might have been playing when you left, there is going to be someone come in and take your spot and then they’ve got the chance to perform.

I spoke to Paul Gaudoin, our coach, and ‘Gooders’ said there would be no guarantees. I’d have to earn my spot back. That’s what I did. I worked extremely hard. I played at the Commonwealth Games and now, I’m about to play at the World Cup.

Although we didn't get the gold we were chasing, I am so proud of what I have achieved. 9 months ago I was blessed with a healthy baby boy and today I stood on the podium and received a SILVER Commonwealth Games medal! It took determination, hard work but most importantly support from my husband and my amazing family and friends! ?? #gc2018 #thanksforthesupport #mumsinsport #proudaussie

I was fortunate that everything had gone to plan with the pregnancy.

Shane and I thought that straight after the Rio Olympics in 2016 was the time to try. There was a bit of a window there where we didn’t have a lot of tournaments coming up and, if I fell pregnant relatively quickly, that would be perfect.

I had no idea if that would happen. I’d been an elite athlete for years, pushing my body to the max. I didn’t know if it would need a bit of time to adjust first. In the end, it happened quickly and my pregnancy was smooth.

This is the third time Harry and I have spent some time apart.

The first was when I went to Perth for a week-long training camp. Then there was a patch during the Commonwealth Games on the Gold Coast when I didn’t see him.

But we were together again straight after Australia won a silver medal. I’ve got photographs with him on the field that I’ll treasure. It’s a story I’ll be able to tell him one day.

He was only about 10 months old but he must’ve thought it was all about him because he was waving to the crowd! He’s a bit of a show-off.

A moment that I'll cherish forever!

Motherhood has made me more complete as a person. I’m convinced that, at 30 years of age, it has made me a better hockey player, too.

When I was living in Perth for a few years, all I was doing was playing hockey. It became very intense. I didn’t know anything different to that but now, with Shane and Harry, I’ve got a great balance of family and hockey.

I appreciate time away from hockey, whereas before I probably didn’t. I’ve learnt how to switch on for hockey and off for when I want to enjoy spending time with my family. I enjoy hockey even more. I can focus hard on that when the time comes and then take a break.

I’m no longer just an athlete. I’m a wife and mother. I joyfully accept the responsibilities those roles bring.

I want to win as much as I ever did but, at the end of the game, if Harry’s there to greet me with open arms and a big, cheesy, four-toothed grin, it’s a really awesome feeling.

I’m not sure if going through pregnancy and childbirth makes a woman physically stronger, as some theories go. It definitely takes its toll on your body. It took me a while to get my strength and speed and footwork back. There are other areas where I’m still building physically. But I’ve got no doubt it makes you mentally stronger.

When you know you’re capable of enduring all you have to go through to have a baby … I mean, it’s a pretty phenomenal experience. I know how strong I’ve had to be – and then, the sleep deprivation on top of that after the baby arrives.

I’m no longer just an athlete. I’m a wife and mother. I joyfully accept the responsibilities those roles bring.

Jet-lag is nothing compared to having a new-born and experiencing that level of fatigue. It has definitely bumped me up a few notches when it comes to self-confidence and belief in my own ability to do anything, really.

Harrison is such an awesome baby.

He’s so adaptable, chilled, and I think he has had to be that way, or it wouldn’t have worked. He’s happy to go to his grandparents. He settles quickly when he’s moved around and I had to be sure he’d be OK like that, or I couldn’t have taken this comeback to the nth degree.

If I’d been struggling and he’d been a really needy bub, the decision would’ve been different.

He’s my first priority. Hockey is extremely important to me as well, though, and I was determined to make it work. So far, so good. But it’s a big challenge.

Shane and I want more kids but we haven’t decided when. We’re just going with the flow for now.

Wimbledon was on while the Hockeyroos have been over here. It’s hard to find the words to describe how impressed I was by Serena Williams making the women’s final. She didn’t win the tournament but she was still the biggest winner there.

I watched the match. Any mum who could come back in the timeframe she did – at 36, with her baby only arriving in September and it being a traumatic birth – and to nearly win the event is truly amazing.

Serena has been described as a super-mum in the media and she should be proud of that. She is a super-mum. Call me a super-mum if you like. I won’t mind! I think all mums are incredibly special.

My dream was to come back and win a Commonwealth Games gold medal in my own backyard. We weren’t able to do that but to win a silver medal nine months after a baby made me extremely happy and proud.

I’ll be trying to go one better at the World Cup, as I’m sure Serena will at the US Open five weeks from now. Serena dedicated her performance to all of the mums in the world. That was a great sentiment.

I love wearing this Australian team bodysuit and I want to send that message out to other mums that if there are things they want to return to doing after they give birth – whether it’s playing sport or anything else, big or small – they should do it.

I’d never try to tell you it’s simple but it is manageable, if you can get the right support from your family.

These past 2 weeks was amazing. It also was a sound for all moms stay home and working you can do it you really can! I’m not any better or diff than any of you all. Your support has ment so much to me. Let’s keep making noise everyday in everything we do. I’ll be back (and soon too) Road to the Us Open is next! Stay strong no matter what. Oh and this is just the beginning. Love you ??

TAKING ON THE WORLD

The Hockeyroos can place high at this tournament. This is a fantastic team. It’s fast, it’s fit and it’s definitely capable of making it to the podium.

We’ve had the ideal preparation with two practice matches for two wins and that’s key, because you’ve got to get out of the blocks quickly.

The way the World Cup is set up, you’re very well rewarded if you top your pool. You go straight through to the quarter-finals. On the other hand, if you finish second or third, you have to do battle again to try to get through to that stage.

It’s cut-throat. We’ll have to put our foot down from the get-go.

It’s going to be tough but we can do it. I love playing finals matches. It’s what you train for, so when we make it to those pressure games, I really enjoy it and my experience allows me to handle the situation.

When you’re a new player coming in, you’ve got to battle what can be severe nerves. I still get nervous but I transfer that energy into doing something positive on the field. I concentrate on controlling the things I know I can control.

Comm Games, we didn’t quite get over the line against in New Zealand in the final but those experiences are character-building.

We can push hard for a big result here.