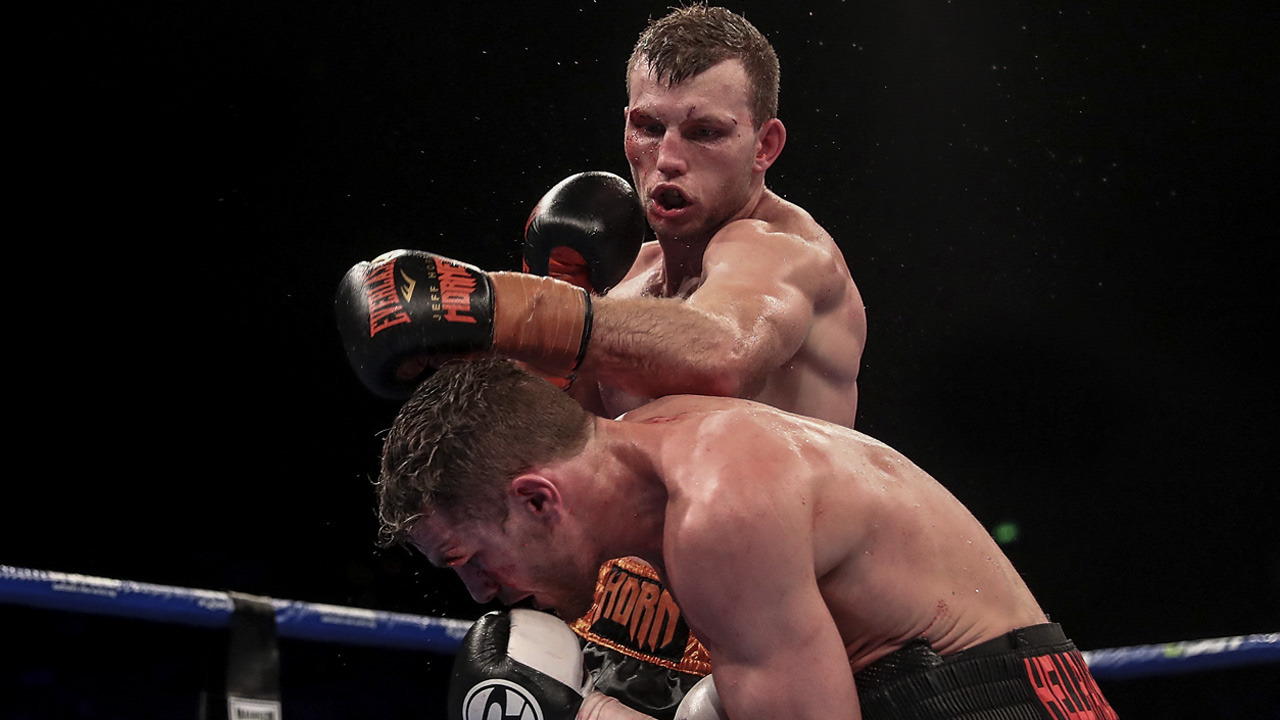 The story I tried to hide

The story I tried to hide

Now that the fight is over and I’ve defended my belt, I can talk more honestly about it – I was genuinely pretty worried a few weeks out from the Gary Corcoran bout.

It wasn’t really anything to do with the opponent – the challenge he presented or the things he was saying didn’t bother me much – but more to do with the excess weight I was carrying and the big cut over my eye I copped sparring.

It was the Monday two weeks before the fight. A jab snuck past my guard and it opened my head right up. I had about three sparring sessions left to go at the time. They were cancelled. I couldn’t risk taking another blow to the area.

If a cut like that opens up during a fight and blood starts pouring into your eye, the referee is a big chance of stopping it. At that point, you can lose everything on account of a light punch or a headbutt or a little graze.

But there was a more immediate problem.

I had quite a few promotional events I had to attend and I didn’t want Corcoran’s camp finding out about the injury. In a sport like boxing, your opponent is always looking for any little vulnerability they can exploit. A big old cut above the eye certainly falls into that category.

I really didn’t want to be on a stage or venture outside or really be anywhere that people could see me. But there was no choice. I had to front up.

So we had an idea: we would call in a make-up artist to help cover it up.

We did that a few times and word didn’t seem to get out. That was good. Then came a time where I had to be in the same vicinity as my opponent without the assistance of the make-up artist. I asked Jo, my wife, to do her best and put a bit of concealer on my head, but I found out later that they noticed it.

I thought, ‘Damn it, it doesn’t matter now.’ The secret was out. The person I didn’t want to find out, had found out.

If a cut like that opens up during a fight and blood starts pouring into your eye, the referee is a big chance of stopping it. At that point, you can lose everything on account of a light punch or a headbutt or a little graze.

I tried to look on the bright side. The plastic surgeon told me he was confident the skin would be as strong as normal. He applied some internal stitches that were nice and strong.

I also took the positive view about my sparring finishing up earlier than we had planned. I was starting to get sore – you tend to get quite a few niggles when you’re sparring – so I told myself that my body was going to be nice and fresh going into the fight.

I wasn’t worried about fitness, I was still working a lot on the heavy bag, but the timing is the thing that comes off a little bit when you’re not sparring.

Then there was the weight issue.

I was worried a couple of weeks out because I was sitting at about 73 kilograms and I had to get in under 66.8 kilograms.

The first step was stopping my creatine supplement, which had probably caused me to hold a bit of fluid. I dropped a few kilos off the back of that. I had also put on a bit of muscle during this preparation and the muscles were holding more fluid than fat tends to.

With 24 hours to go, I still had four kilos to drop. We made a plan.

First, I found out what time the weigh-in was – 2pm on the Tuesday – and I worked back from there. I had a really light dinner the night before, a Caesar salad without the bacon, and then I completed a session at about 8.30pm in a sauna suit. That’s basically working out while you’re wrapped in plastic.

The weather was pretty warm anyway and I started sweating as soon as I started moving. I lost almost two kilos in a bit under an hour. That was a good start.

I woke up as late as I could the next day and then I went to Steven’s place. Steven’s a mate of mine and he does my cornering. He has a big bath in his place so he ran it for me, I jumped in and tried to get those last couple of kilos off. It worked.

I was pretty confident that my strength wasn’t going to be drained by all this. I’ve had to cut weight many times before and it hadn’t impacted me in past fights. I was hopeful it wouldn’t be an issue.

The stitches did end up busting open during the fight, but only the outer layer. The internal layer of stitches held together as the surgeon had said they would.

I was being very, very cautious about our heads coming together and my head opening up. Sometimes it’s hard to avoid when you’re both coming in pretty quickly. I remember him throwing his head around a few times and thinking, ‘Whoa, whoa, whoa, that was so close to being a disaster.’

He smiled at me a few times, but he didn’t talk to me throughout the fight. He was more looking, and shooting me a glare at the end of rounds. I didn’t know what that meant. Maybe it was the equivalent of puffing out your chest, trying to show that you think you’re winning, but I felt confident that I had him covered.

I’m confident big opportunities will open up for me now. I took the title off Manny Pacquiao, I’ve defended it against Corcoran and I’m excited to see what happens next.

I was being very, very cautious about our heads coming together and my head opening up. Sometimes it’s hard to avoid when you’re both coming in pretty quickly. I remember him throwing his head around a few times and thinking, ‘Whoa, whoa, whoa, that was so close to being a disaster.’

I tried to keep my focus on this fight – and I think I did a good job of that – but of course there are moments when thoughts creep into your head about the future and you think, ‘If I can win this fight, I’ll go a long way to securing my family’s future.’

The money has all of a sudden picked up after the Pacquiao fight. If I can keep winning and the streak continues, the paydays will follow and we’re set.

There’s a lot of water to go under the bridge yet before we determine who our next opponent will be.

I’ve told Glenn Rushton, my trainer, that I should be able to get ready for a fight by about April 20 next year. I don’t know if that will be the Terence Crawford fight straightaway. I’m due for a mandatory against him in April. We’ll see.

I would always prefer to have that fight here, but, again, there will be quite a bit of negotiating to get through before that is determined.

I see fighting at home as a big advantage. Your opponent has to fly all the way over to Australia, sit on the plane for all that time, and come to a hostile environment. Meanwhile, you don’t have to travel at all and everything is on your terms on home turf.

I would love the next fight to be in Brisbane again. But if it isn’t? So be it. I’ll try and find a positive in it. I was able to do that this time around.