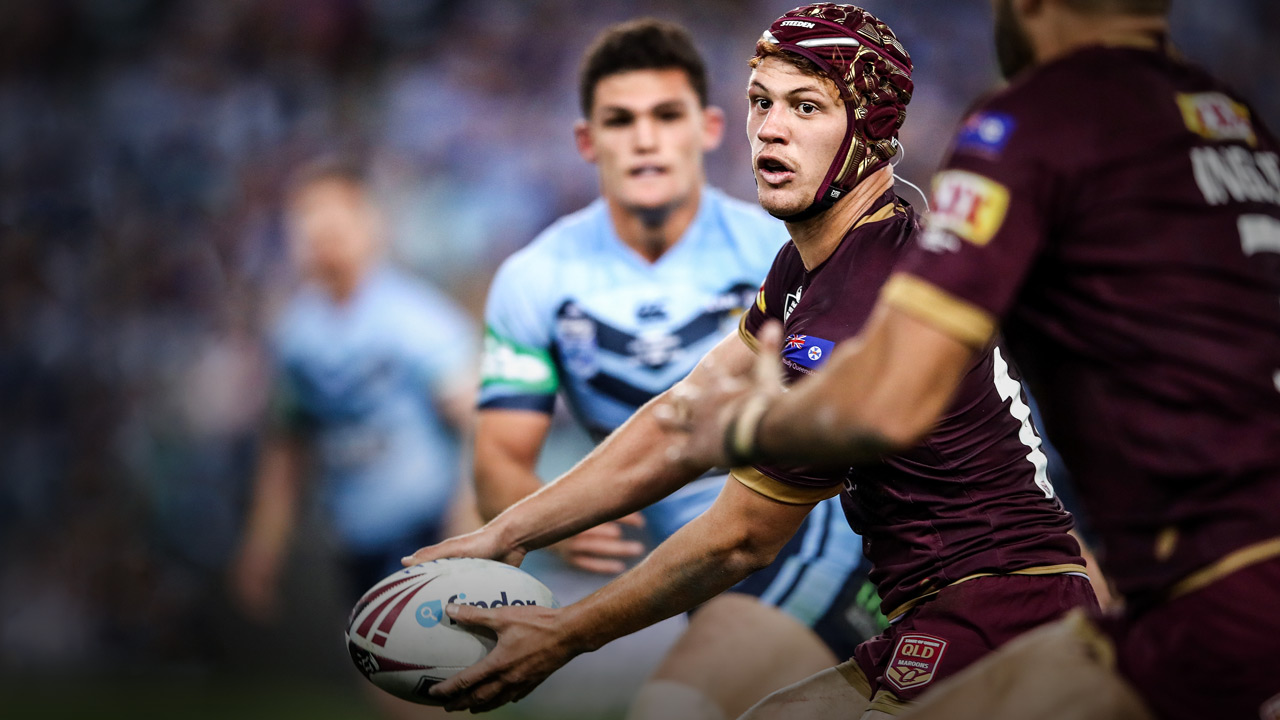 The schoolboy with one million views

The schoolboy with one million views

Kalyn Ponga had flown to Mackay for a funeral the week we hosted Nudgee College, a big game that our Churchie team needed to win to stay alive in the premiership.

It had been pouring down rain, to the extent that his flight back to Brisbane was delayed. After a difficult week, Kalyn was flying in on game day. We’d just finished our warm-up and he turned up in a taxi.

He put his boots on. He took his place at fullback on a soaking wet field, with the cricket pitch in the middle turned to bog. They were tough conditions.

Kalyn being Kalyn, he played a great game. He scored a second-half try in a 24-13 win and handled the high balls that came his way.

Not too many young blokes could have that type of week leading into the game, have the unforeseen problem with the weather and flight, turn up at the last minute and still perform at that level. It was the game that impressed me most from Kalyn. It was just him to a ‘T’. He was only 16.

That was during the 2014 GPS season, when I was Churchie coach. Kalyn certainly had some supporters that year – no doubt plenty were turning up to watch him play. The whole team enjoyed a lot of support, given the football they were playing. We had an undefeated season where the average scoreline was 51-13.

Jadyn Su’A of the Brisbane Broncos and Brodie Croft of the Melbourne Storm were two from that side who went on to the NRL. A number of others went on to play Super Rugby. Mack Mason was our captain and he’s now down at the NSW Waratahs, while Izaia Perese, Angus Scott-Young and Liam Wright are playing for the Reds.

In the No.15 jersey was Kalyn, a kid we first laid eyes on at a carnival in Toowoomba.

Kalyn’s dad and family had a rugby background. I actually first met his father Andre back in Mt Isa, when they were starting up the junior rugby union club there.

When I met with the family at Churchie, I recognised the surname, knew that I knew it from somewhere. Then as soon as Andre walked through the door, we realised we knew each other from the early 2000s. It’s funny how things work out, because that wasn’t how Kalyn first came on to our radar.

Our director of rugby at the time, Gary Nucifora, and myself were going around carnivals and looking at potential talent we may be interested in. We saw Kalyn at a Toowoomba rugby league carnival, playing for Capricornia under-15s.

He had a big reputation from age 14, so we went and had a look at him. He was a standout at that carnival. We made contact after that; it was a process of a couple of months to get him to the school but it all worked out.

After a difficult week, Kalyn was flying in on game day. We’d just finished our warm-up and he turned up in a taxi.

Though he was playing union with us at Churchie, Kalyn came to us as predominantly a rugby league player. Coming to Brisbane opened up other opportunities as well, such as AFL; he had a dabble at Aussie Rules.

He was a typical country kid: played a lot of sport growing up, which is a good thing. In New Zealand, he also played golf, winning the under-13 national title. He didn’t pursue golf seriously in Brisbane but clearly the talent was there.

Kalyn played fullback in our program, the position he’s continued in, and he’s always had those ball-playing skills that are so essential to modern fullbacks. I think those skills came from his touch football background. He represented Australia in touch and you don’t get to that level without being able to catch and pass well, without being able to use the football quickly and effectively.

When we got Kalyn into our school program, he was exactly what we’d seen at that Toowoomba carnival. His speed, footwork and vision were second to none. The best I’ve seen in a young bloke.

His ability to fit into a team structure was also excellent. It was never about Kalyn, it was always about the team and how he’d fit into it. He was really well respected by the boys. Just a good bloke to have in the program. None of the success ever went to his head.

He was a great player to coach, for all those reasons. He was blessed with remarkable natural abilities that you can’t teach; things that you are careful not to coach out of him. But on the flip side, he was always willing to learn and ask questions. He always wanted to be the best that he could be.

There was always plenty happening with Kalyn’s sporting career; he was on a contract with the Brisbane Broncos around the time he came to Churchie. When he was coming off contract at around 15-16, he had plenty of interest. That was when the Cowboys offered him a longer term contract.

Amid all the interest, Kalyn was the same as he was on the field: unfazed. He was lucky with his mum and dad, they are a very close family. Andre protected Kalyn, looked out for what he did and didn’t need to hear. He has always had good people around him and he’s a very mature young man.

Even when that video came out.

That YouTube video of Kalyn’s 2014 season highlights came out while he was still at Churchie. He didn’t know it was coming. The school had nothing to do with it. It was just made by a guy who watched our games.

When it came out, it went absolutely crazy. It’s now had more than 1.1 million views.

We were a bit concerned for Kalyn, given that it came out of nowhere and was suddenly everywhere on social media, then in the mainstream media. Something like that puts a lot of pressure on a kid. Even if it’s done with good intentions, it has big ramifications.

Everyone was now talking about him. It was a big thing to handle.

Kalyn’s speed, footwork and vision were second to none. The best I’ve seen in a young bloke.

The social media age has thrown up all sorts of these challenges. A lot of young footballers make their own highlights videos – you never see a bad one, do you? – but that certainly wasn’t the case with Kalyn.

It’s one thing to release your own highlights but when one gets done without your knowledge, and it’s clear that it’s going to go big given the style of player you are, that’s a lot to contend with for a young man if he’s not supported well.

Yet Kalyn handled it in his stride. He did a great job with it.

Kalyn’s pure ability is his standout quality, the one that everyone sees. But his air of composure on the field, where it doesn’t matter the score, the state of the game or what’s on the line … he’s just never flustered.

I think that’s one of his best attributes. It’s something that can separate great players from the very good players. And it’s a great asset off the field, too.

Kalyn’s composure and the ability to remain humble will hold him in good stead for a long career. His family will help keep him grounded.

You have to keep working hard, keep being hungry to be the best. That hunger is easy in your first couple of years when everything is still fresh but much harder when you want to carve out a 10-, 12-year career.

He’s got a lot of footy in front of him but he’s got the tools for long-term success.

On debut for Queensland at age 20, mid-series. An excellent performance.

It was typical Kalyn. How good he is probably still surprises some people.

I have never seen Kalyn look nervous on the field. He never looks under the pump. He just carries himself well at all times.

In his post-match interview with Darren Lockyer, when Darren asked him about the difference between club and Origin footy, Kalyn said, ‘I’m not sure, not too much’. That’s just the style of kid he is. Nothing fazes him. It was good watching him on such a big stage.

When that YouTube video came out, it went absolutely crazy. It’s now had more than 1.1 million views.

Kalyn’s quite big through his lower body but he’ll have to get bigger through the upper body. He’s still a kid, maturing physically. That will still take a couple of years.

I remember watching his first game for the Cowboys: an NRL debut in a 2016 sudden-death final against the Broncos, playing on the wing at age 18. Again, typical Kalyn: he was unflustered and handled his business remarkably well.

Kalyn’s first proper introduction to an NRL team was with the Cowboys, alongside the likes of Johnathan Thurston. That kind of exposure is invaluable, to see how hard professional footy is to play week in, week out. I think when you sit outside it, it all looks rosy and easy but it’s a tough profession.

I was surprised when he left North Queensland for Newcastle. I thought Thurston and Matt Scott would have been ideal mentors at the Cowboys, great guys to sit underneath and learn from for a couple of years. Thurston will be an Immortal; it seemed a huge opportunity.

But I think he liked the relaxed nature of the Knights club. It’s also a mining town. His family’s always been around mining, with his dad in Mt Isa. Newcastle probably felt a bit like home for him. After arriving as a high-profile signing, his early efforts with the Knights have been impressive.

And he’s certainly started well as an Origin player but it’s just 60 minutes that he’s played so far. It’s the consistency that’s key: in first-grade to begin with, over 24 games, then in Origin.

We still must bear in mind that Kalyn is a young kid. There will be mistakes. But he’s a great talent and a fine young man with a big future.