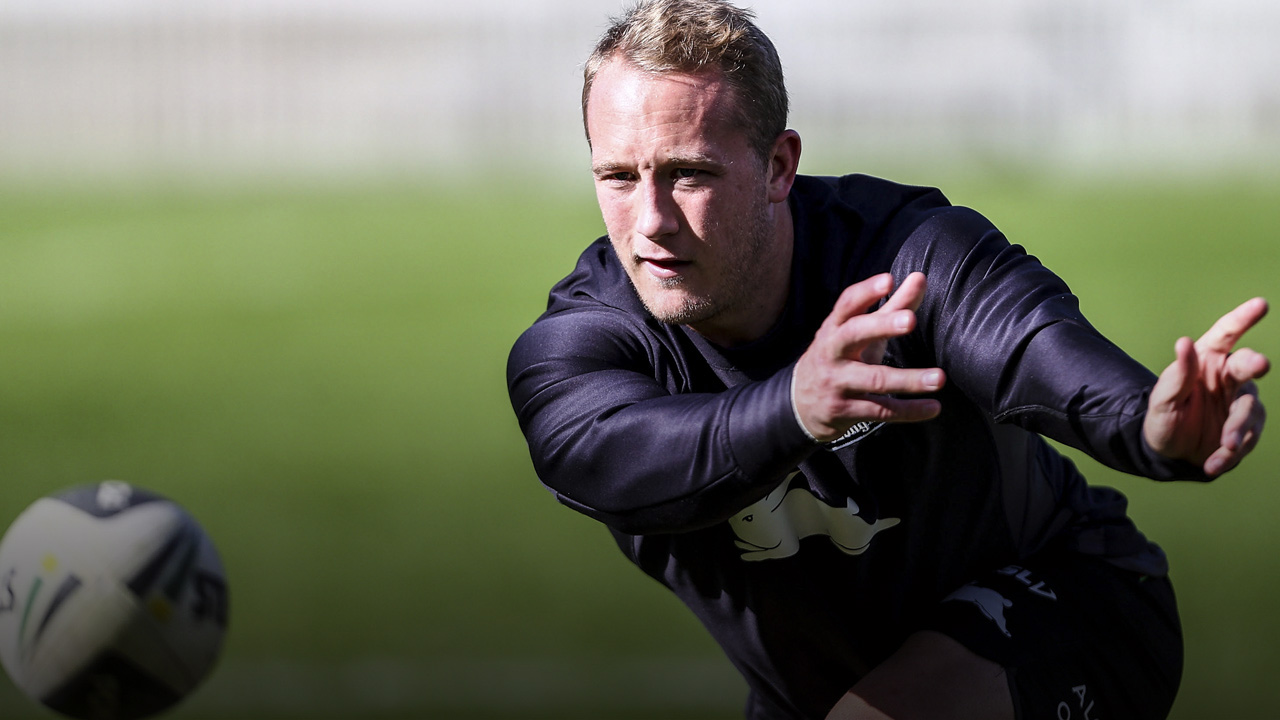 The reality of an NRL workhorse

The reality of an NRL workhorse

This is my last season at the Rabbitohs.

I’m signed until the end of the year, but the club told me before last season finished that they wouldn’t have anything for me in 2019. I didn’t see it coming.

Shane Richardson called me into his office and said, ‘Mate, I don’t want you to take this as a personal thing, it’s just the direction the club’s heading in’.

I didn’t ask any questions. I accepted it and left it at that. There was nothing I could say that was going to change things. That’s footy. I’m not the first player it’s happened to and I won’t be the last.

I’ve got full respect for Richo for letting me know upfront. It was better finding out then, rather than with a few rounds to go this season. Rugby league’s a business, but I know Richo and it wouldn’t have been easy for him to deliver that kind of news.

Now I’ve got to play good footy this year for the Rabbitohs and see where it takes me. I’ll be playing on, whether it’s here in the NRL or overseas. I’m 29 in June, so I’ve still got a few good years left. I’ll know when the quality of my football is no longer good enough. Then I’ll be done.

My wife, Lauren, and I have got some big decisions to make. I’ve got to find a new club. If I have to relocate outside of Sydney, to keep playing in the NRL or go to Super League in England, I’ll need to nail something down pretty soon.

We’ve got three young girls – Milla, who is four, Andi, two, and Billie, 14 months. Milla starts school next year and we’ve got to enrol her.

Lauren and I haven’t shut the door on having more kids, but we’ll have to put that on hold for the time being. If I do have to leave Sydney, I’ll want to take my family with me. I couldn’t expect my wife to make a big move to say, England, when she’s five or six months pregnant.

HEAD DOWN, BACKSIDE UP

I’ve loved Souths all my life. I grew up along Botany Rd. My dad took me to games as a kid. I used to love watching Nathan Merritt play, he was such a freakish try-scorer, and Bryan Fletcher after he came across from the Roosters.

When Souths were playing at Sydney Football Stadium, as it was known then, I got to play at halftime of first grade a lot with my junior club, Coogee Randwick Wombats.

One of my teammates at Souths, John Sutton, also played for the Wombats. Sutto is five years older than me and he’d still come to watch Wombats A-grade games after he’d made first grade. I was ball-boy for the A-grade team and I’d look up and see him in the grandstand and think wow.

South Sydney is everything I’m used to and all I know. It’s home.

It’s been a rollercoaster ride at times. I’d be in and out of the team, dropped for a few weeks and then put back up. It’s been hard sometimes to find the enjoyment in the game when that happens, but I’ve just kept reassuring myself.

I’ve told myself, ‘You’re not the first player this has happened to, plenty of players have gone down to reserve grade and fought their way back up again’.

I didn’t want to be one of those players who just accepted it and never got to the NRL. I’m lucky I’ve had my wife and parents and sisters as a strong support group.

My wife, Lauren, and I have got some big decisions to make. I’ve got to find a new club.

Every team must have its superstars if you want to win titles and we’ve had players like Greg Inglis, Sam Burgess and others who have brought their brilliance to the side. We wouldn’t have won the premiership in 2014 without them.

But only a few are going to earn $800,000 or a million dollars a year and you’ve got to have the other players prepared to get in there and work hard and do their job.

I get it. I’m one of those players.

My role has never been to flick pass out the back or throw a cut-out ball or anything like that. My job is to get to a position on the field and get a quick play-the-ball so the star players can do their thing on the next play.

That’s me and I’m fine with that. I don’t have to set up or score a couple of tries and see my name in a big headline to feel satisfied.

There’s a lot more to the game and if you do a good job you get credit within the club and the team. That’s where people know for real what’s going on and who’s making a contribution.

I’m 99 kilos – 100 on a good day – and I’ve been coming off the bench to play one of the middle-three forward positions at prop or lock. I’m going up against blokes 10, 15, 20 kilos heavier than me and I’d never say no to that. I just put my head down and my backside up and do my best.

It’s not just in games. At training, you might have to tackle one of the Burgess twins in drills. It’s partly about technique, but the test is you’ve really got to want to put your body on the line. That’s what footy’s all about. Having a go.

Our eldest girl is going to start playing footy this year for the Wombats, and I’ll be telling her that. Get in there, have a go and keep going.

‘YOU COULD SEE MY SKULL’

It’s not hard to remember the last time I got dropped. It was right near the end of last season. I went down for a few games and then came back to first grade for the last round.

The coach, Michael Maguire, explained it to me. He said, ‘This is what I’m going to do, I’m giving a few young guys a shot and see how they go’.

I appreciated being told. Madge always let you know face-to-face and I respect that. It’s hard for a coach – you’ve got 30 players in a squad and you can only pick 17.

But, of course, you worry and deep down I wondered, ‘Am I being shown the door?’ and, ‘Where do I really sit in the team?’

If you commit yourself, like I’m proud to say I do, you’re going to get hurt sometimes. You’ve just got to wear it. Get over it and get on with it.

It’s like when I split my forehead open playing against Parramatta at Pirtek Stadium in 2016.

You could see my skull through the gaping hole in my forehead, but to me it was just another cut and I’ve been cut plenty of times. This just happened to be worse than usual. You get used to it. You have to.

The test is you’ve really got to want to put your body on the line. That’s what footy’s all about. Having a go.

We were coming off our own line and I had a head clash with their hooker, Isaac De Gois.

We put a kick downfield and I turned to our trainer and he had a mini-towel in his hand. I grabbed it, pressed it against my head and chased the kick. I didn’t know how bad the cut was, but I could feel my head moving around while I was running.

Whatever, I wasn’t going to let it stop me doing my job.

I got down there behind the main chasers and they made the first tackle. But then Parra did a shift, Semi Radradra ran down the sideline and scored a try and we were back up the other end behind our own line, waiting for the conversion.

All the while with my hand still holding the towel against my head.

The trainer came over, looked at the cut and said, ‘No, you’ve got to go off’. As much as I didn’t want to, I knew I couldn’t argue.

The club doctor at South Sydney, Andrew McDonald, did a bloody good job stitching me up at halftime. He put half-a-dozen or so on the inside, through the muscle, and about 20 on the outside.

The doc knows my head well. I’ve had so many cuts to my face. I’ve been split around my nose – it looked like it was going to peel off – and my eyebrows have been split numerous times. He’s put more than 100 stitches in my face and head and other parts of my body.

I wasn’t concussed or anything, so I didn’t have to go to hospital, but my eye closed up so I stayed awake that night icing it to start getting the swelling down. I needed to get my eye back open as quick as I could so I could get back to training.

I missed a few days of training and they put me through the concussion tests just to make sure, but I was good to go the following week. I just put some ‘vaso’ on there and strapped it up and I got through the game unscathed.

I pride myself on being able to play injured and not lose any impact. Not all players can do that. If someone isn’t going in 100 per cent you can tell, and they’ll get targeted. But if I’ve got an injury, it’s not about me going out there to try to show how tough I am.

It’s about doing a job – a job that I love. If I don’t play, I’ve got to have a damn good excuse and 26 stitches in my head doesn’t qualify as far as I’m concerned.

I just hate not playing.

KEEPING MY SIDE OF THE BARGAIN

I never used to think about being at any other club, but now I have to.

Like every player at Souths, I had a one-on-one meeting with our new coach, Anthony Seibold, during the pre-season.

He told me how he sees me as a player and my role in the team. He said, ‘It’s all up for grabs, you’ve just got to train well, perform well and if you’re doing that, I’ll pick you’.

Someone asked me the other day, ‘Why do you keep doing this?’ It’s a challenge to keep playing at a high level and I do love a challenge. And I love being around these guys. They’re a great bunch of blokes.

I’ve got the chance to become a 10-year man in first grade at the most famous club in rugby league. I don’t need any more motivation than that.

Souths have always done the right thing by me. They don’t owe me anything, but I believe I’ve kept my side of the bargain as well.