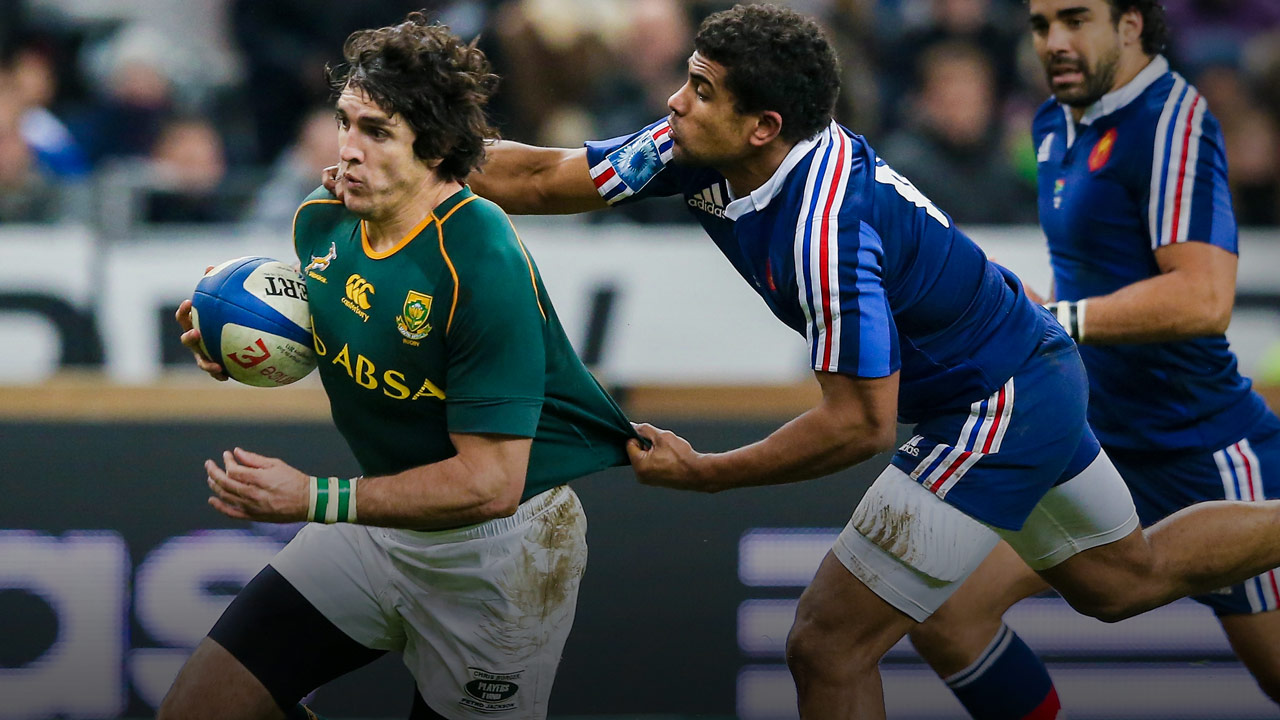 I’ve been in Perth a week and one thing’s clear: it was devastating for the Western Force to lose their spot in Super Rugby. It’s a massive rugby community here and it has been hurting.

This Friday is a new beginning: the start of World Series Rugby, against Fiji at nib Stadium, the first of seven home matches for the Force against international and Super Rugby opponents. I can see people getting excited again. The inaugural match may be a sellout and will be a nice stepping stone to see what happens with this competition.

For this club, it’s time to grow stronger and rise again, through a resilience formed in the tough times of the past year. It is about how the players respond – the 11 guys who were already here and also us new recruits. How we stand up in this moment will show the character of the club and the way forward.

So how did I come to be here, after 72 caps for the Springboks including a 2007 World Cup win, and the past six years playing in Japan?

When the Force approached me with an offer to not only play but coach in a new competition, I was excited. I will double as the defence coach and I thought, what better way to start my coaching career off than at the Western Force, a professional outfit that played in Super Rugby and is now starting World Series Rugby (WSR).

Matt Hodgson, the Force legend and now our head of elite performance, was excited about the club and the direction that this competition can move in over the next four to five years. From the outset, WSR will be different.

Seven-point ‘power tries’, awarded when a team has held possession continuously from inside their 22; the ability to take lineouts without waiting for the opposition or match officials; a time limit on scrums; and 12 rolling substitutions, rather than the standard eight one-way replacements. A faster, sharper game.

I was speaking to the other coaches here and they were saying that some of the rules have been used in South Africa’s Varsity Cup, our leading university competition. They provided some excitement by mixing it up and trying something different, spicing up rugby like IPL did with cricket. And who knows – if the players and fans enjoy one of these changes enough, perhaps one day we’ll see it in international rugby.

? ANNOUNCEMENT ? Western Force big name signing Jaque Fourie, the former star South African centre has arrived in Perth and made his first media appearance. Check out the behind the scenes of today’s press conference on our Facebook page ? #BeTheForce #SeaofBlue

The World Series Rugby competition, of course, was the brainchild of Andrew Forrest. I’ve always been aware of his association with the club, from the days when we played against the Western Force.

I’ve seen him many times before this offer came up and think I met him once or twice earlier in my career. He’s a great guy – the players here talk very highly of him. It’s amazing that he put up so much money for Rugby Australia to keep the Force alive as a Super Rugby franchise.

That the Force were ultimately left out of such a massive competition, despite that generous offer… that’s not a great thing. Such exclusion is something we also saw in South Africa, with the Cheetahs and Kings.

How we stand up in this moment will show the character of the Force and the way forward.

There’s an example there. The Cheetahs and Kings didn’t lie down: they went and joined the Pro14 in Europe, which I believe they’re enjoying so much more than they did Super Rugby.

The Lions, too. At one stage, the club was relegated from Super Rugby but everyone just stuck together, got back into the competition and look at them now. They’re one of the strongest teams and they’ve played in the last two finals.

An opportunity is there for Western Force. This new competition can go from strength to strength and, maybe in a few years’ time, many of the other Super Rugby teams will join; we already have games against the Rebels and Crusaders in its first year.

I haven’t watched much Super Rugby in recent times. For me, it’s very watered down.

Once in South Africa, the stadiums were full, there was a lot of interest. Nowadays, the stadiums are not even a quarter full. The interest isn’t there and some of the teams back home have been playing very bad rugby, with the Sharks and Stormers especially struggling this season.

And the struggles of Australian teams against New Zealand franchises have been well documented: no wins since the 2016 competition. So what are the Kiwis getting right that South Africa and Australia aren’t?

When I was playing, the New Zealanders were just an all-round team, from 1-15. Those guys liked to play with the ball and they aren’t stuck in a stereotype. They always play progressive rugby.

Perhaps the coaches of Australian teams have failed to move with the times. They’ve been struggling so much in Super Rugby the past couple of years.

This new competition can go from strength to strength and maybe in a few years’ time, many of the other Super Rugby teams will join.

And the Wallabies are much different from when I played. The Wallabies of my era, you knew that come Saturday they would have done their homework, known where to attack. It just doesn’t seem like that anymore. The Springboks, too – it’s like they haven’t advanced, while New Zealand are the trendsetters.

The old Wallabies were an all-round team, from the lineout to the scrums and the loose play. You never knew what to expect from them. We played a Test in Bloemfontein and they’d done their homework so well – I think it was still with Quade Cooper and Adam Ashley-Cooper at No.10 and No.12. They had a move where they isolated the inside centre, they knew that I as the defender was going to shoot on the No.10 and they’d play an inside ball.

They almost scored with that – almost. Like their domestic sides, those Australian Tests teams were technically among the best in the world.

Headlined by our 2007 World Cup win, that was a wonderful international era for the Springboks. The ’07 side is now a brotherhood that we will share forever.

From 2003, after we played the World Cup in Australia (losing in the quarter-finals to New Zealand), we had an unbelievable few years. We won a Tri Nations in 2004, the World Cup, beat the British and Irish Lions in 2009 and claimed another Tri Nations that same year. The players from that era have a very tight bond.

For me, the Springbok that I loved playing with most was Schalk Burger. He was the all-round player and a hard man. He could run the ball, pass the ball. An all-round flippin’ great player.

Nearly a decade has passed without a repeat of those heady days. Perhaps the plateau in South African rugby starts from the very grassroots.

After our 2007 win, I took a break from rugby and helped schools with coaching kids. We had coaching clinics for younger kids, from under-9 to under-13, then under-13 to under-18, Mondays and Wednesdays.

It was how my interest in coaching really began – but it also was an eye-opener.

Rugby is still the No.1 sport in South Africa. School rugby remains very strong, interest-wise. But working with the younger players back home now, they lack the basic skills: passing and catching.

The problem, for me, lies with the fathers. You can teach them whatever but send them home and their fathers will teach them other stuff. Every father thinks he’s a Springboks coach! You can’t tell those guys what to do.

Then you get to a coaching session and the kids can’t even pass or catch a ball. Yet they want to play touchies or they want to kick. I’ll get a prop that wants to kick for goals the whole time! I’ll be like, ‘Listen bud, you need to come here and train your skills, do your passing and catching’. Then he says, ‘No coach, I want to kick for goals. I’m like, ‘No bud, you’re wasting my time’. Good fun!

Playing in Japan for six years, I think it’s going to be an amazing experience for the guys who will tour there to play in the 2019 Rugby World Cup. Even for the spectators, it’s such a great place to go; to have dinner, explore, and the stadiums are going to be amazing.

In Japanese rugby, what’s so unique is that you play for a company – and about 80 per cent of the players still work during the day for the company! I had so much fun there.

The standard of their competition has certainly been improving. When I arrived there in 2011, I was scoring a lot of tries – I think I played 12 games and scored 20 tries!

The Wallabies of my era, you knew they would have done their homework, known where to attack. It just doesn’t seem like that anymore.

But the years after that, a lot of the clubs got professional coaches, got overseas players from Australia and New Zealand, high-profile players, and the standard of rugby has picked up tremendously. It was quite a strong competition when I left last year.

The 2015 World Cup, when Japan beat South Africa, was a massive stepping stone for the game there. The fullback that played against the Springboks and scored all the points, Ayumu Goromaru, they erected a golden statue of him in Japan! He alone packed out their Yamaha Stadium for a match – when he went off, half the crowd left! It’s quite amazing.

Japanese people are showing a lot of interest in rugby, which will only get bigger and bigger over the next couple of years leading into the World Cup.