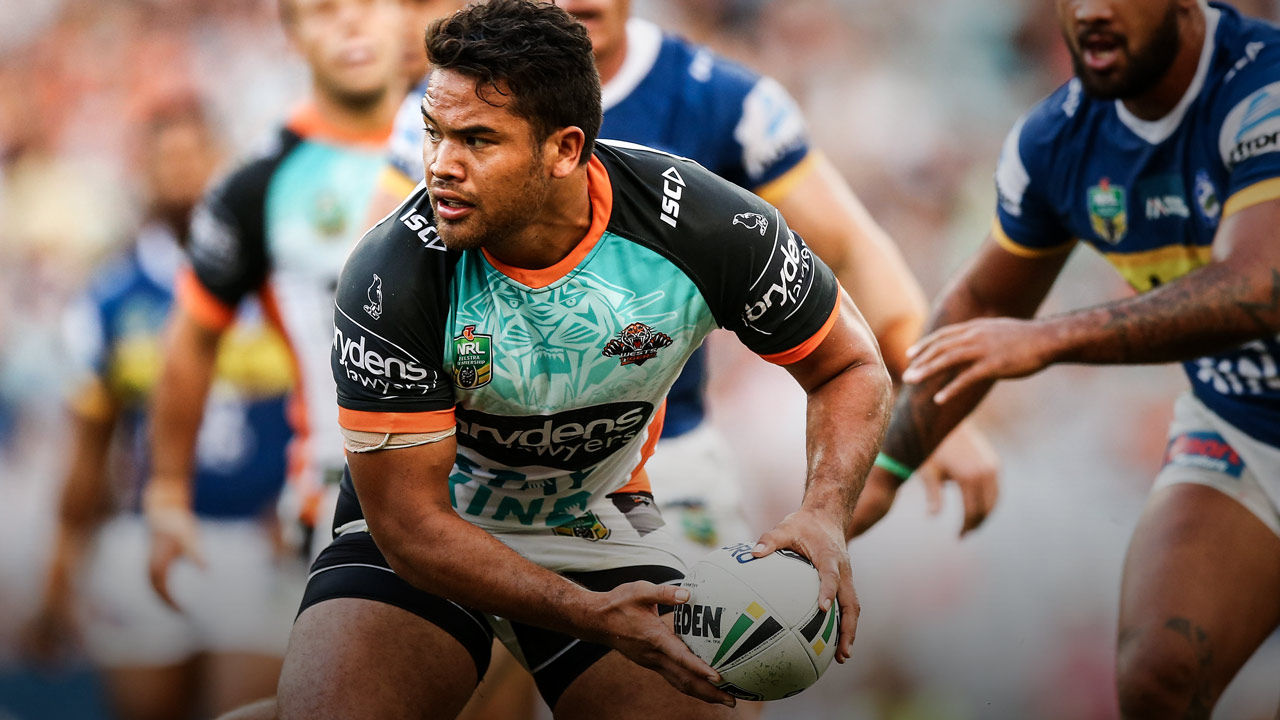 A special moment amid Mile-High madness

A special moment amid Mile-High madness

It was a serious moment for me. A special moment.

So when the anthem singer in Denver didn’t know the words to ‘God Defend New Zealand’, I didn’t pay much attention. The emotion of representing my country at Test level for the first time took over me and I wasn’t going to let anything ruin it.

I had my left arm around Jamayne Isaako, who was also making his Test debut. I had Marty Taupau on my right. I had my eyes closed, my right hand over my heart. I just kept singing.

Watching it over again on all the videos that came out afterwards, it was pretty funny. The boys all tried to sing through it but, by the end, some looked like were trying not to laugh.

#rugby league/ someone has just murdered the national anthem of New Zealand! pic.twitter.com/YBbbILBujD

And that wasn’t the end of the unexpected twists.

Our flight home got cancelled due to an electrical storm in San Francisco. I’d certainly rather miss the flight and be safe than be on one where something went wrong, at least.

It was a bit of a shock to some of us, because we just wanted to get home and also get ready to play for our NRL clubs on the weekend. But it was pretty cool – we got to stay there one more night and spending some extra time with the boys was enjoyable, especially with it being my first New Zealand camp.

They just booked us into a hotel near the airport. Then, we all got put on different flights on the way home – with some mixed results.

Another F***ING delayed flight which is highly likely to be cancelled due to mechanical issues. Now the last player stuck at @DENAirport with staff that has been patiently waiting for over 8hrs on the back of a cancelled flight yesterday! @UNITED is by far the worst airline ever! pic.twitter.com/bnV07mzGeX

Poor Marty Taupau was unlucky – it could have been any of the boys but it just happened to be him whose flight was again delayed. He just wanted to see his family and he wasn’t happy. I think he’ll still back up this weekend for Manly and hopefully play good footy for his club.

I was due back in Sydney on Tuesday with our original flight and instead ended up arriving home first thing Wednesday morning. I had that day off, which worked out well.

It was a shame that the flight delays happened, given there were some people intent on criticising the Test being played in Denver. I think having the game there was a really positive thing.

Regardless of what happened, I really enjoyed my time there. I look forward to going back – we’re committed to play a New Zealand vs England Test there for the next three years.

What a amazing experience it was to not only have the honour too represent my country but to do it somewhere amazing with a great bunch of blokes, had the best time on camp and it will be something I will treasure for the rest on my life #denvertest#teiwikiwi⚫️⚪️⚫️⚪️⚫️

It was a bit different in Denver! The people are really nice in the US – they talk a lot, they like to ask you how your day is going, little stuff like that.

There were billboards of us playing displayed around the city. People were asking us, ‘What are you here for, are you here for the football match?’ It was cool that they knew we were there for a rugby league game. And we got a good crowd, nearly 20,000.

It shocked a lot of people how hot it was in Denver for the game, especially coming in from winter at home. It was near 30 degrees, more like days you get during early pre-season training. And of course, we were playing at the Denver Broncos’ famous Mile High Stadium (Sports Authority Field), so it was pretty hard to breathe at some stages of the game due to the altitude.

You can understand why the Broncos have always had a strong home-field advantage in the NFL. You can imagine that training in the altitude would make you much fitter and stronger, and make a difference when teams visit that aren’t used to the thinner air.

The boys did pretty well acclimatising, because it turned out to be a fast-paced game.

The emotion of representing my country at Test level for the first time took over me and I wasn’t going to let anything ruin it.

The Denver training facilities are very impressive. Being a successful NFL franchise, they’ve got the best of everything. It’s an eye-opener, seeing what they work with – it’s way different to Concord! A quarter of their weight training room is bigger than our Concord facilities, though we do have everything we need at Wests Tigers.

The main stadium is impressive, with a 76,000 capacity. They have three full-size training fields outside with heated turf. The practice facility is 115,000 square feet, including a full-length indoor field, so they can train regardless of the weather.

It was certainly an interesting place to make my Test debut.

Esan Marsters on debut gets the first try of the #DenverTest!#NRL pic.twitter.com/seETbqW6pm

It was massive for me, playing for the Kiwis. I loved being in camp with the team. Watching a Kiwi legend like Issac Luke go about his business was great and I loved being around other guys making their debut like Jamayne Isaako.

Scoring a try – so much emotion went into that try. Growing up as a kid, you always dream of those moments. I was so proud that my family got to see that. It was exciting too, knowing how much inspiration I got from the players who have come before me, to think about kids in New Zealand watching me score that try.

Benji Marshall was one of those players who was a massive inspiration for me. To now be able to train and play with him every week at Wests Tigers, it’s amazing. I’m very lucky to have that opportunity. Not many people can say they’ve played with one of the legends of the game and one of their heroes.

How good was the win, still pinch myself playing outside @benji6marshall the king ? still got that step unc??✊?

I made the Junior Kiwis two years ago. That was emotional enough. I never in a million years thought that two years later, and just a year since my NRL debut, that I’d be playing for the Kiwis in a Test.

Any time you pull on that black jersey, representing not only yourself but your family, I hold that very highly. My family went to so much effort when I was a kid to make sure I had opportunities to play rugby league and succeed.

Michael Maguire called me himself to tell me I was making my debut. He called in the morning and that whole day I was buzzing, I didn’t know what to think. I was so excited, realising that all my hard work over the years had paid off.

Michael was a chilled-out guy. Being new to the Kiwis job and with a new-look team, I guess he was just as nervous as some of us were. He made us younger players feel welcome in his camp and gave us confidence that we could go out and do the job.

Benji Marshall was one of those players who was a massive inspiration for me. To now be able to train and play with him every week at Wests Tigers, it’s amazing.

We had seven debutants in that game and it felt like a really young team. We had to learn quickly. But the boys all handled themselves well and enjoyed the experience.

The public perception has been that losing someone like Jason Taumalolo from the Kiwis team is pretty massive and of course, it is. But with him gone, there were some good performances in his place against a strong England side.

It was unlucky that we didn’t get the win in Denver but now, those younger players know what it’s like in Test footy and will be better for the experience. I’ve tasted what it’s like at that level and I want to go back to my club and improve my game even further.

I’m excited for what the future holds with our national team.

Michael Maguire has been confirmed as the new Kiwis Head Coach #TeIwiKiwi ?? ? photosport.nz

Now I’m back in Sydney – and what a week for Wests Tigers.

Along with Benji, Robbie Farah is someone who I watched when I was little and it will be massive to play in his Tigers comeback game at Leichhardt.

He’s a legend of the club and will be great for our team; he’s a creative hooker who knows when to inject himself into the game. He’s looked sharp in training. He’ll be a big help to our young hookers during the rest of the season, too.

Robbie has been pretty emotional building towards the weekend. It will be an emotional game, given his history with the club. I’m sure he will go out there and give it his all.

He will want to finish off on a good note and if we can play some good footy, starting Sunday, hopefully we’ll be playing finals come the end of the season. It could be a fairytale ending, for both he and Benji.

I followed the Warriors growing up but my dad, Tim, was a Tigers fan. I always liked watching the Tigers, they played great footy in that era around the 2005 grand final win that Benji and Robbie starred in. And all the kids in New Zealand grew up watching Benji and trying to imitate what he did on the field.

I think Ivan Cleary sees a lot of drive and determination in Benji and Robbie to end on a good note at the club. Having them around the team will be massive.

He is a quality player to add to our team mid-season. People haven’t really known what his true position is so far in his career but I think he’s definitely a fullback. He looks sharp at No.1.

But no matter where he plays, he does his job. He’s a special talent who had some big moments playing for the Bulldogs, who made it to a grand final. He’s got a good awareness on the field, he’s fast, he’s fit, he knows how to dictate play.

At 24, we’re getting him at a great time of his career, right when he should be coming into his prime. He’s still got a lot of footy to play. And he’s got an old Bulldogs teammate here in Josh Reynolds.

I can’t wait to see Moses play his first game for us.