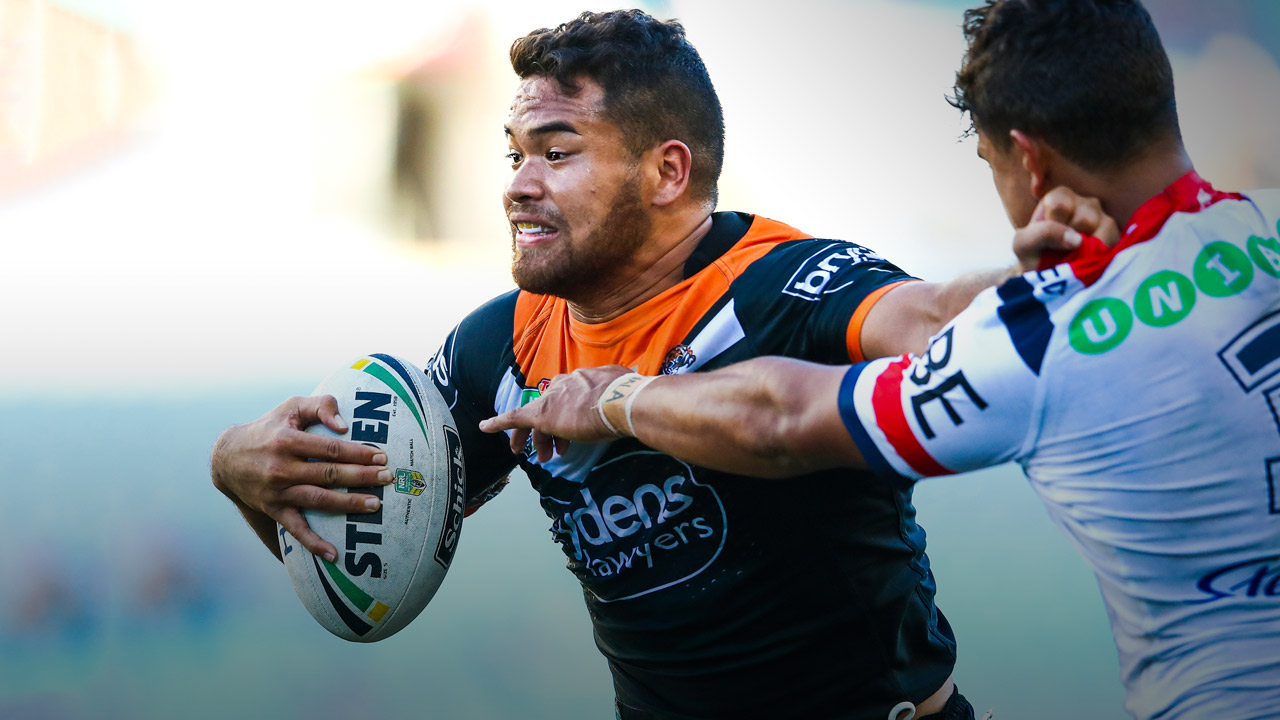 Benji, Ivan and me

Benji, Ivan and me

I used to get nervous around Benji Marshall at training. I was star-struck by him.

I remember watching him when I was a little kid, playing for the Tigers and representing New Zealand. He was a hero of mine, one of my biggest idols.

I was only nine years old when he won the grand final in 2005, so to suddenly be training alongside him every day in pre-season was a lot to take in when you’re only 21 and you haven’t been playing first grade for very long.

I’d have a joke with Benji about it and tell him it made me nervous, being in the company of such a great player. That was my way of making everything relaxed.

He’d just have a laugh. He’s pretty cool, pretty down to earth. He’s already just like one of the boys again now he’s back at the club.

I’m over the nerves now. Benji and I are pretty close.

You might pretend you’re Benji Marshall when you’re playing muck-around games with your mates as a kid, but you don’t think you’re actually going to end up playing with someone like him.

I’m sure it was a big moment for Benji, too, coming home to the Tigers, but the thing is he’s not just thinking about himself.

He’s here to play his footy, but he’s also thinking about everybody else in the squad and what he can do to help them. I know, because he’s already helped me a lot and I’ve seen him do the same thing with other players.

He pulls me aside at training and tips me on little stuff I need to work on and the areas of my game that are going to have the best effect for the team – attacking structures, the lines I run, that kind of stuff. Just getting my timing right and knowing when to pass the ball or hold it.

I’m more an ad-lib player, so I want to try and create things when I play and Benji likes that in me. But he says it’s about knowing when’s the right time.

The thing he tells me the most is to play my own game and be the best player I can be. He wants me to be prepared to try stuff and not be afraid to find out how good a player I am.

That’s the key as far he’s concerned. Don’t overplay things, but don’t hold back either.

It couldn’t be better for me at the Tigers, because I’m getting some great help from many different people at the club.

Before I made my first-grade debut midway through last season, I was training with the NRL squad and Elijah Taylor got me to start doing some extras with him after training. Passing and other drills. Just little things I needed to improve in my game. Even stuff in his own game he wanted to work on, we’d do it together.

ET is his own harshest critic, so he’ll always find a part of his game he thinks needs attention. That’s a good lesson for me as well.

I was playing NSW Cup last season and I thought my chances of breaking into first grade would be pretty good if I did well there.

But with all the drama that happened at the club and a new coach taking over, you don’t really know where you stand. I got my chance though. Ivan Cleary put me in halfway through the season and I grabbed it with both hands.

Ivan’s the right sort of coach for me. He’s very calm and really close with all the boys and he understands players. He knows how they feel and I guess a lot of that comes from him having his own son, Nathan, playing first grade at Penrith.

He knows how to communicate with us.

Ivan doesn’t overload me with information. He tells me what he expects from me and that I wouldn’t be in the team unless he believed I could do the job. That gives me a lot of confidence.

Apart from that, he just wants me to stick with the patterns set by our defensive coach, Craig Sandercock, and the structures set by our attacking coach, Andrew Webster, and go from there. I think I’m pretty good at following a plan.

I played in the halves growing up. I was a five-eighth, like Benji. That’s where I get my ball skills from.

Then I moved over to Sydney from Auckland when I was 17 and got switched to the centres. I was bigger than a lot of the other kids and they wanted to use me out wide.

I was still going to school when I came across. I just asked my mum if I could go over and try to make it in the NRL. Mum encouraged me to try to live my dreams, but I know she found it hard to let me go and be away from my little brothers and sisters.

Mum and dad together had me and my older brother and now mum’s got four kids with her partner and dad’s got five with his partner. I did find it hard to leave, but I had a vision in my head about what I wanted to do in life and If I was going to do it, I had to commit myself 100 per cent. So that’s what I did.

I stayed with my great uncle and his family at Roselands, went to Year 11 at Kingsgrove High School and played for the St Christopher’s club. I got a contract with the Roosters SG Ball side and played with Angus Crichton there. But I eventually got cut by the club at the same time as my mum moved over here with her family.

I went to live with her at Rozelle and did Year 12 at Holy Cross College at Ryde. That’s how I got into the mix for the Tigers’ system. I was determined to finish high school. That was part of the plan when I left Auckland and I stuck by it.

You might pretend you’re Benji Marshall when you’re playing muck-around games as a kid, but you don’t think you’re actually going to end up playing with someone like him.

I got a trial with the Tigers and they gave me a contract with the under 20s side. I haven’t looked back.

I was up for the challenge when I made my first-grade debut against the Dragons in round 13. It was hard, but it wasn’t the physical side of it that tested me – I could handle that. It was the level of professionalism that was way beyond anything I’d experienced.

Every player from both sides knew his role perfectly and because of that the game flowed. I had to learn to perfect my role and I’ve worked hard on that.

Russell Packer is at the Tigers now, but he was still at the Dragons then and he came up to me after the game and shook my hand and said ‘congratulations’. I had my debut logo on my jersey, just a little bit of writing to mark the occasion, and he must’ve seen that.

Young guys coming into first grade are going to get tested, but if you put your body on the line you get respect.

I played the last 13 games of last season and almost every week I’d come up against players I loved watching when I was a kid. Jarryd Hayne was one of my favourites and I played against him twice when he was at Gold Coast.

It’s so different when you get out there on the field against these guys. It’s intimidating but I enjoyed the challenge, and each time I got through it OK, I looked forward even more to the next time I’d play against someone like that.

It happened again when we played the Roosters in round one. Cooper Cronk. I didn’t get to play against Melbourne last year, but now I’ve played against Cronk, and this week we’re playing the Storm so I’ll get to play against Cameron Smith and Billy Slater. More of my favourite players growing up.

Ivan told me before the game against the Roosters that he had faith in me or I wouldn’t be there. That’s all I needed to know. I was happy with how I went. Made a lot of runs, got a few offloads away. But there are still a few things I’ve got to sharpen up on.

There’s a long way to go, but that’s a great way for us to start. Especially keeping a team like the Roosters to eight points.

Now we’re playing the premiers and they’re going to be ready for us after we won, so it’ll be an even bigger test. We’ll get a good guide to where we’re at. Hopefully, we’ll play some good footy and get a win.

Things are falling into place pretty well for me. I’ve got a girlfriend, Isabelle. We’ve been together for two years and living together for six months, at Mortlake. My mum and her family are not far away, at North Ryde.

And every week I’m living my dream by playing against champion players I used to watch on TV as a kid and great young players as well, like it’ll be against Cameron Munster for Melbourne.

I think we were all put in this world for a purpose and I want to do my best in the NRL and be like one of those players I watched when I was younger.

I want to be respected, just like they are, and remembered in the game after I retire. But not just for what I do on the field, but for being a good person off the field as well.

There are plenty of people who inspire me and I want to be inspiring as well. I’m still taking small steps at this stage, but every week’s an adventure for me in this game.

That’s what I love about it.