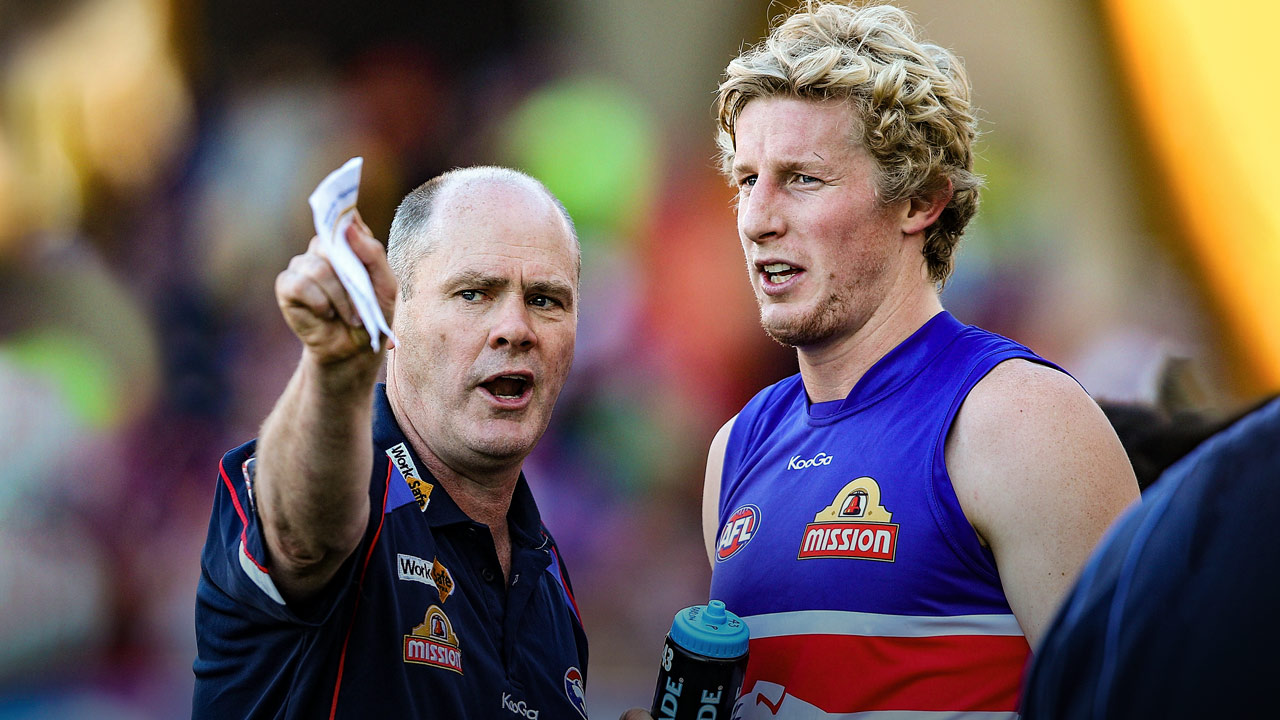 I will never forget a game I played for Western Bulldogs against the Gold Coast Suns in 2011 when I went against the game plan and didn’t kick down the line, like I was told. Twice.

The runner came out and pointed to the bench, where the dreaded phone was waiting. Any player will tell you: ‘No one wants to answer that phone.’

I picked it up and Rodney ‘Rocket’ Eade was waiting on the line. I soon made my third mistake that day.

I tried to explain myself and boy did I get one of Rocket’s famous sprays — an animated emotional response to an action that he disagreed with.

Rocket’s sprays were often talked about throughout the club rooms, and, having been at the Sydney Swans for the previous five years before I became a Bulldog, there were two things in my AFL career I wanted no part of: a 6am punishment session or a Rocket Eade spray.

By now, you’ve probably heard the Rodney Eade coaching box recording, or at the very least had someone from the football world tell you about it. Some of you might have listened with disgust or amazement. Others would have gotten a laugh out of it. And for some it might take them back to a coaching spray they once endured.

Before I try to explain my own thoughts on the Rocket recording, I want to impress that I do not condone what’s in it. I have seen and received coaches’ comments many times over the years and know the damaging affects their words can have on a player and, more importantly, a person.

While I do not agree with a lot of coaching sprays and believe there are more beneficial ways to motivate a player, I do understand why some coaches chose to verbally vent their frustrations.

Often in the professional sporting world, we hear about the pressure that players are under each week. We are told they are dealing with losses, injuries, non-selection, contracts, internal and external perceptions, including from the media and many more issues.

Until you have lived inside the world of professional sport, it is hard to gain a true understanding of these pressures.

For a coach, I reckon you could times these pressures by 45 for all the other players on a list, add another 15 to that for the other coaches and support staff that are under your watch, and then add another 10 for the powerful and opinionated board members critiquing your every move.

It’s fair to say with all these going on around you, it might be hard for a coach to act calmly at times when things don’t go their way.

After I finished my relatively short-lived AFL career, I began to study psychology, as I wanted to explore, understand and learn more about the consequences of these pressures and why we sometimes behave the way we do in certain environments.

I was also interested in being able to assist players and coaches to have more awareness, more tools and more techniques to handle their professional environments.

I learnt from my studies that key contributors to our behaviour are those close to us, such as our parents or caregivers. In a sporting environment you need to understand your coach is like your parent or your caregiver.

From the age of 18 when you first get drafted, all you want to do is make that person happy and content with your behaviour, as they are the person that decides your fate. Like your parents as you grow older, you start to notice certain behavioural traits that are similar to theirs.

So it only makes sense that many past players who become coaches have learnt certain behavioural patterns or coaching styles from their previous coaches.

Rocket was raised as a player under legendary coaches David Parkin and Allan Jeans. I have only heard stories about Parkin and Jeans, but I feel I can accurately assume that they both could deliver an animated address or an emotional response to a player’s action.

I am only guessing, but I think it is safe to assume that other coaches around the time of Rocket’s development years as a coach would act in a similar manner and that is the old school way of coaching, which seemed to be ‘play harder, faster and don’t complain’.

This way of coaching could have also been reinforced to a young Rocket as the right approach, as he saw this coaching style have a lot of success under both Parkin and Jeans.

I played only one season under Rocket as a Bulldog after five years at the Swans under Paul Roos. Both coaches had their different ways and I’m fairly sure both had their challenges with me as a player.

I was the footballer who some might consider ‘un-coachable’; there were times when I was out of the game before the ball had bounced. I was that player who would often overthink, catastrophise or misinterpret every message.

So I can understand the frustrations coaches had with me. However, I will take this chance to add that some coaches make it incredibly hard to know what they are thinking, what they are planning, and where the hell you stood each week after a game.

This is what I really liked about Rocket; as a player I felt I knew exactly what he thought of me and where I was in his future plans.