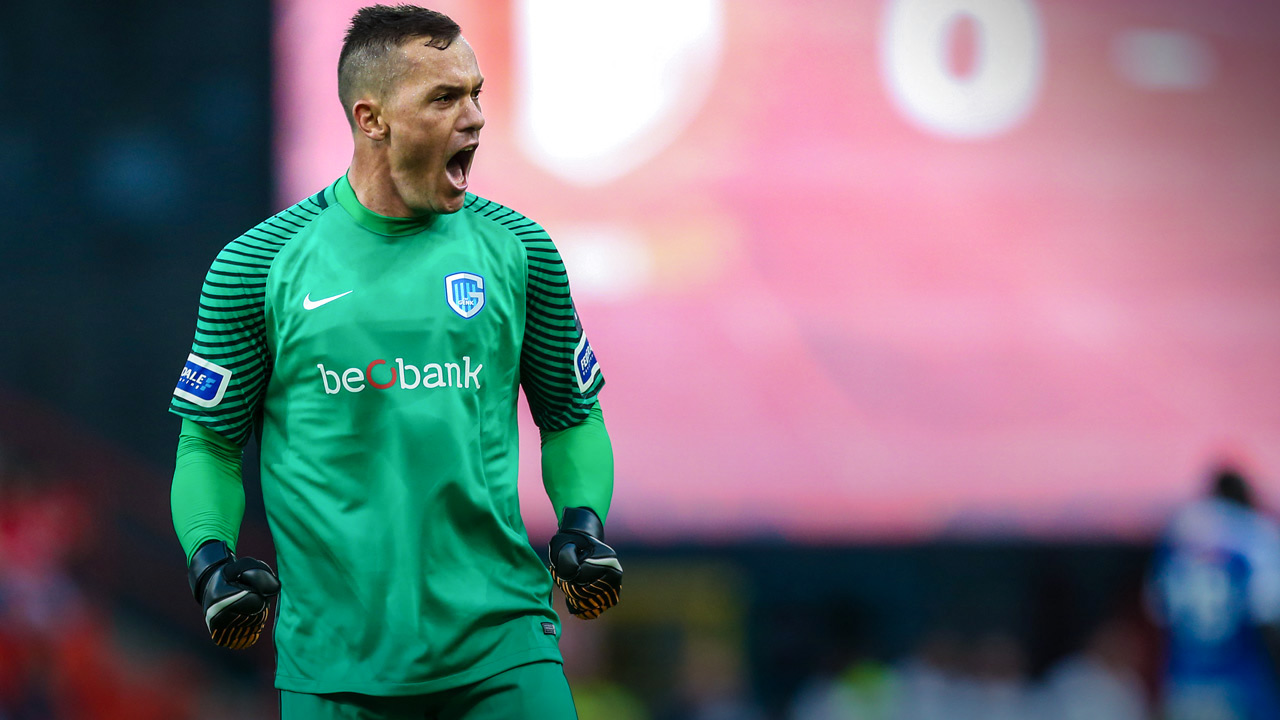 The offer I couldn’t refuse

The offer I couldn’t refuse

Probably the biggest question mark in my mind before I came to play overseas was whether my family was going to be OK and be looked after properly.

My two-and-a-half-year-old son Harley has a serious liver condition and has had a transplant. In Australia, we’re very lucky to have some of the best medical professionals in the world. The last thing we wanted to do was take my son out of that situation where he’s being looked after – and possibly not get the best care available.

After going through everything we went through with my son, I thought that my dream of playing overseas was dead and buried, that we’d never go.

My fears were quickly alleviated by the first email from Genk, the Belgian club where I’ve just played my first full season in Europe.

When the club first contacted me by email, they mentioned my son and said they’d found a specialist for him here in Belgium.

That was the first time I’d heard from them, and for them to already know about my situation and to understand the things I was worried about left me with a really good feeling, and pretty much showed me how keen they were on me.

The deal originally came about when I was in Socceroos camp last year when I was still at Sydney FC. Maty Ryan, who had done a season on loan at Genk, asked me if his agent Mikkel Beck could give me a ring. Of course I said, ‘Yes I had no problem with that’.

Mikkel knew that Maty was going to be leaving Genk, and he thought I would fit in perfectly here, so he wanted to put me forward, and I was obviously very keen for him to do that. From there on in, it sort of went really quickly.

I was in Russia for the Confederations Cup when it looked like Genk and Sydney FC had reached an agreement. Somewhere down the line after the grand final is where things sort of ramped up, and I have to say Sydney were brilliant in all of this to let me go.

They didn’t want to lose me, but they knew my ambitions and how much this would further my career. They were never going to stand in my way.

THE MOMENT IT ALL SANK IN

I think I was a little bit naive coming over here thinking it was going to be just like football in Australia, 11 versus 11, and you’ve just got to get the ball in the back of a net.

I just didn’t realise how much things would be different, especially for a goalkeeper. We’re over here playing in the middle of winter, and as a goalkeeper you can’t run around like the players do to stay warm, so I can honestly say there have been times this season when I was freezing. I literally couldn’t warm myself up, I’ve never been so cold in my life, which sort of throws a spanner in the works.

You’re also playing on heavy pitches with a wet ball whereas in Australia generally it’s nice conditions to play football, so that took me a little bit of time to adapt to as well.

When Genk first contacted me by email, they mentioned my son and said they had found a specialist for him here in Belgium.

And I probably didn’t start off as well as I would have wanted to. I made a couple of errors early on, but I think once I settled in and started to adapt to life and football over here, I started getting back to my best form. Then in the second half of the season, I really hit my best form. I got ‘player of the month’ two months out of three, and was feeling like myself again.

Honoured to receive this seasons golden shoe for KRC Genk. Thank you to those who voted for me. Always a privilege to wear the Genk shirt and represent this great club!! pic.twitter.com/ZIB7QlM8fI

It’s been a great experience over here. Every game is a full stadium, a lot of colour and passionate supporters, flares, flags and so on. It’s a typical European league, it’s what I grew up watching and what I always wanted to go to Europe to do, so it’s been really really pleasing.

There was a great moment of realisation in my first game for the club (which was the second game of the season after I missed the first through injury).

It was an away game to Standard Liege – and I’ve now realised they have the most crazy, passionate supporters. My first half of football in Belgium was in front of their home fans, and the stadium is built very close to the pitch and it just goes straight up like a massive wall at the end of the goal.

It was so loud, but I remember I wasn’t nervous at all. I was just so happy I was there. We lost 2-1 but it was still an amazing experience.

In terms of results, Genk has had a funny old season. In a way it’s been a typical European season. We weren’t doing so great in the first part of the season, which meant the coach who signed me ended up getting the sack just after Christmas, just before our winter break.

The last couple of games will now determine just how good of a season it has been.

LIFE IN A BELGIAN VILLAGE

My wife Kristy and my son Harley came over a couple of months after I arrived here at Genk. We found a house, which is great because Harley has a little backyard to run around in.

He’s doing really well now, Harley. He obviously had a really rough time for the first 18 months or so of his life, but now he’s just a normal little boy. He’s started school over here because they start school really early, he’s talking, having little conversations with me, and he’s a happy kid.

We still have ongoing issues. As a transplant recipient, he has to have medication every day for the rest of his life, but he’s doing really well and it’s amazing to see how far he’s come.

Our house is in a little town about 15 minutes from where we train and play. It’s a great little town. Everyone knows us here already. We go down to get groceries and people are always stopping to talk about football. It’s just a different world over here. Football is much like rugby league is in Sydney and Brisbane, or AFL is in the other states: it’s in all the pages of the newspapers and people are just mad about it.

But of course, it’s been mostly football. We play a lot of games so when we do get downtime, I tend not to do too much. Over here, you travel two hours in different directions and you’re in four or five different countries, so we have travelled a little bit. But I tend to try to take some rest.

At the start of this year, I think we had eight games in 24 days. I guess that’s the other side of football over here. You have to adapt to playing a lot of games in a short amount of time. So I just keep my head down and keep going.

Being over here is what I’ve dreamed about my whole life, so I guess I’m going to give it everything I’ve got and not have any regrets at the end of it, and not feel like I had more to give.

While I’m over here, I’m just going to do everything I can to be the best that I can be and if I can progress my career, then great.

A good point away to the league leaders.. Big game against Antwerp next week!! ??

Obviously, I’m hoping to go to Russia with the Socceroos and I’m a little bit anxious to see if I make the final squad. I think I’ve done everything that I can to get in there, I can’t think of anything more I could have done.

A big reason for coming over here was to help my chances of getting into the Socceroos squad and get to the World Cup, so I’ll be over the moon if I do get selected. There are at least four goalkeepers there who deserve to go but only three who can go, so someone’s going to be disappointed and obviously I’m hoping it’s not me.

I think we’re probably in one of the better groups. France is obviously going to be a tough game first-up, but the I think we can get something out of other two games for sure. Peru, especially, is one game I think we can do really well in.

We’ve done well against South American competition recently if you exclude the last game against Brazil. We drew 1-1 with Chile at the Confederations Cup and we probably should have beaten them. Then most recently, we drew with Colombia nil-all.

I got ‘player of the month’ two months out of three, and was feeling like myself again.

So there’s no reason we can’t do well. We’ve put good performances together and it’s really just about finding that form at the right time, and that’s why we’re going into camp a month before the World Cup to try to get into the best possible shape that we can.

We’ve spoken about it a lot during the qualification campaign. We don’t want to be the team that’s happy to qualify for the World Cup. We want to be a team that actually does something there now, so this is our chance to try to do that.

On a personal note, I was disappointed coming off the pitch after my first game for the Socceroos having given away the penalty against Colombia, because we didn’t deserve to lose that game.

Danny Vukovic. On his 33rd birthday. On his Socceroos debut.

What a moment to remember! ?

I’m sure Colombian supporters would say they should have won, but up until that point they didn’t really have that clear-cut opportunity. So for me to give the penalty away was disappointing, and it was nice to have the chance to rectify the situation and go on to draw the game.

Was it a lucky guess when I dived to the left to save the penalty? What I can tell you is that we study the penalty kick takers before every national team game.

The rest is up to us.