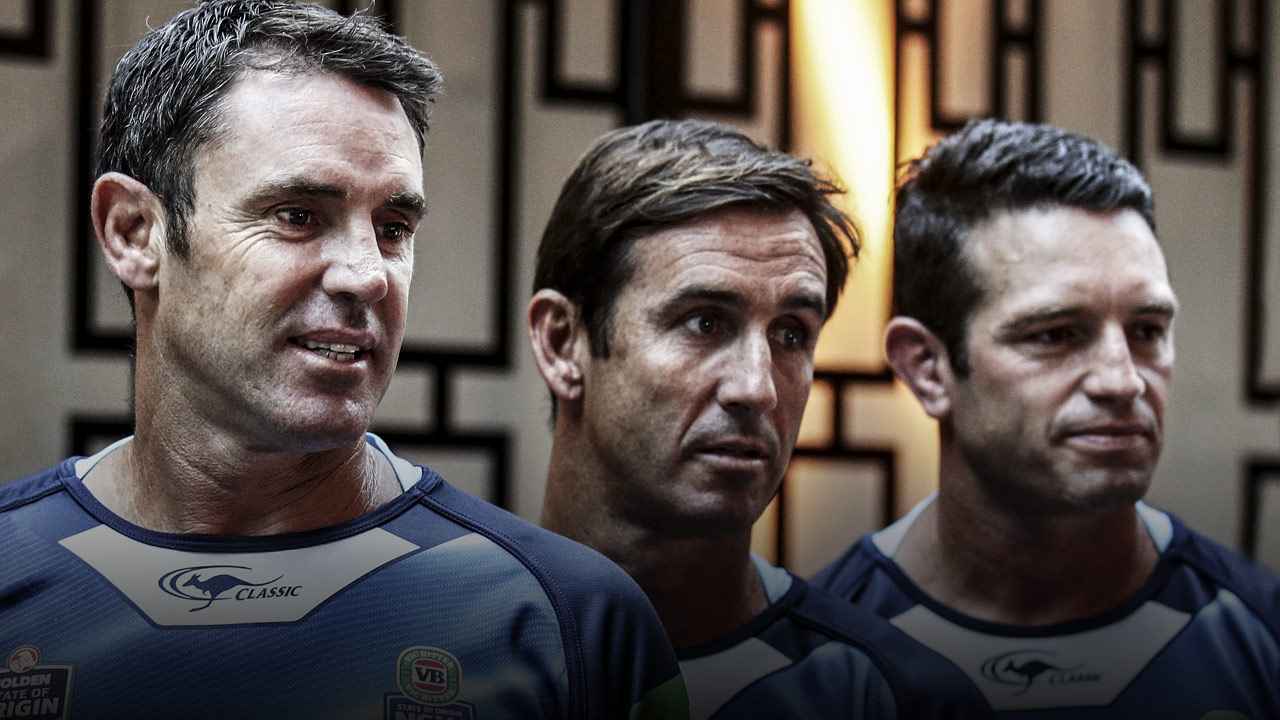 When Freddy set me straight

When Freddy set me straight

‘Don’t you ever – EVER – let that happen on your watch again.’

I’ll never forget those words. They were from Freddy Fittler. Out of all the great lessons I’ve learned about footy and life during my time in the game, that was one of the best.

It was 2004 and Gus Gould, the NSW coach, had asked me to be captain for the State of Origin series. My mind spun out. I thought, ‘This is enormous. How can I get this job done?’

We were at a training run a couple of weeks before the team for the first game was named. There were 20-odd players there who were in the frame for selection.

‘Mate, you’ve got until the end of the day to give me an answer,’ Gus said to me about the captaincy. ‘We need to act on this’.

I walked back in the dressing-room and looked around. I was surrounded by players who were captains of their clubs. Suddenly, my mind became clear.

I thought, ‘Wow, he could’ve picked any of these guys but he has chosen me for a reason. How could I not do it? It’s an absolute privilege’.

I went straight back out and said ‘Gus, of course I’ll do it, I’ve just got to believe I can do it’.

There was a lot of off-field drama before game one. A couple of players were sacked. A few others were fined. It was big news. I learned so much during that period about how to bring a team together after it crumbled a bit.

no such thing as a warm-up

After the match, Gus brought Freddy back from rep footy retirement to play in game two. He hadn’t played at this level since 2001.

Gus said, ‘I’m bringing him in to help with a few areas you can learn off’.

I was still captain and we went to Wentworth Park for our first training session. We started doing warm-up, but I soon learned there was no such thing as a warm-up with Freddy. As soon as you walked on the field, that was training.

We were just doing a simple drill, easing into things, and Freddy looked at me. I sort of looked back at him and looked away. Then I looked at him again and was he staring at me. He had a very serious look on his face.

He mouthed the words, ‘After training’. I thought, ‘Riiiiight’.

I had no idea what he was on about. The whole session I was thinking, ‘What’s he going to say to me?’

As soon as the session was over, I found out. He took me aside and started on me.

‘You set the standard in every way here,’ he said. ‘You’re the level. There’s no such thing as warm-up. There were guys cutting corners out there, you have to say something if that happens.’

I was a bit in shock, but I was getting a top-drawer lesson in what captaincy was really about. Freddy was putting me on notice.

‘This is your team, you grab hold of it,’ he continued. ‘If you allow that stuff to happen, that’s the standard you’ve set for the rest of them. Lead that session from the get-go’.

He mouthed the words, ‘After training’. I thought, ‘Riiiiight’. I had no idea what he was on about.

I knew what he meant. There were a couple of dropped balls and guys not reaching the witches hat in the shuttles. It might not seem that big a deal, but it was.

I thought about it a lot. That competiveness, that level of preparation, that’s what made guys like Freddy and Joey Johns the players they were.

I took it all on-board and put it into practice.

Freddy is not just this laidback, carefree dude that some people think. He’s just got this remarkable ability to zone out and then zone back in. He could chill out away from training and playing and then become the ultimate competitor when it mattered.

It rubs off on the people around him. We’re going to need every ounce of intensity the coaches and players can muster going into State of Origin II. Because Queensland will come back.

We’ve seen it happen too many times before. You only have to go back to last year. As soon as you think you’ve got them, they get you. They love being told they can’t win, but that’s the last thing you’ll be hearing from any of us. We all know what they’re capable of.

Everyone involved with the Blues has got to be ready to produce the game of our lives if we want to clinch the series in Sydney.

Freddy will make sure of that.

My Origin career didn’t end the way I wanted it to.

So many of the games I played in were notable for what we call Origin moments – some in our favour and some not. Special efforts that play a big part in the result.

A loose pass from us and Darren Lockyer swoops on the ball to score in game three in Melbourne in 2006. A spectacular take and brilliant put-down by Israel Folau off a high kick to the corner was the highlight of game three in 2008.

That was my last Origin game. But this year – a decade later – I got the chance to be a part of it again. As Freddy’s assistant coach.

I’ve been working in the Pathways program for the NSWRL in recent years and it’s been hard to watch that Queensland dominance when I know how much a series loss affects everyone at the Blues.

To be involved in the main game again is a dream.

You feel it differently as a coach. As a player, you’ve just got to get your own game in order. And if you’re captain, you lead by your actions and hopefully everyone follows.

But as a coach you’ve got to be able to communicate and deliver specific messages. You’ve got to get all the players to believe in what you’re trying to tell them. Everyone has to be on board or you’re not doing your job properly.

You feel it differently as a coach… Everyone has to be on board or you’re not doing your job properly.

We’ve got a good team involved in the coaching structure here in the Blues camp. We’ve all worked hard to get our messages across and get the team to reflect the way we want them to play.

We all come up with suggestions on training and the game plan and we all set it together.

It’s great to have Greg Alexander in there as Freddy’s adviser. I’ve really enjoyed watching his relationship with Nathan Cleary and how they work so well together – especially in the kicking department.

There was some talk about vision from halftime in the dressing-room during the Channel Nine coverage of game one. Freddy was addressing the team and Brandy came up from behind and gently put his hand on Freddy’s shoulder to indicate he wanted to make a point. Freddy stepped back to let him go.

It’s cool to watch the bond between those two play out for a common cause. When Freddy was appointed coach, he said the bloke he wanted right alongside him was Brandy. They’ve been through so much together with their footy and their personal lives – ups and downs.

Most of the stuff I learned about Origin mentality came from Gus and Ricky Stuart.

I had two winning series with Gus, who gets Origin better than anyone, and one under Sticky, who’s particularly intense. I loved that from Sticky.

I’ve never forgotten any of it. I wrote a lot of things down at the time so I could use them later. I’ve had some great coaches to learn from – Warren Ryan and Wayne Bennett as well.

Obviously things evolve, but at the same time I continued to go back to those things during my career and the messages they drove always made sense. They still do now that I’m a part of the coaching staff.

In Origin you don’t get time to check the scoreboard, you just act on every play. The best thing you can do is be there for your teammate.

I really enjoyed my time working with Damien Cook in Origin I. The performance he had was a great reward for all the hard work he does in his preparation. He’s had to battle hard to get to this point in his career. He’s been at the crossroads a few times.

But that’s all behind him now. He’s made his Origin debut and now it’s time to look forward because there is so much up for grabs. It’s on to Origin II. Remaining focused and starting the process again for Cookie is key as he played at a really high level in his debut.

I really enjoyed getting to know Tyrone Peachey as well. I love his personality, the positive way he attacks his football and life in general. It’s infectious.

We didn’t know where he was going to play when he came on in game one, so we had to cover all the angles. He ended up going on at right centre.

Origin I was an enormous experience, but we’ve got so much more hard work to do now we’ve rolled into camp for game two and the preparation has begun.

I drove Josh Addo-Carr down to Sydney on Sunday night after the Knights-Storm game in Newcastle and he just couldn’t wait to get here.

It brought back so many good memories because I was the same as a player. It drove home to me just how enjoyable this experience is.

Last year, we won the first three halves of footy 44-10 and we all know what happened after that. Queensland won the next three halves 34-6 and took out the series.

So you can never take anything for granted in a great sporting contest like this and we have to work even harder this time.

Some people are writing them off and that’s the position Queensland are most comfortable in. It’s only a short week in preparation this time and with so much work to do, that’s all that matters now.