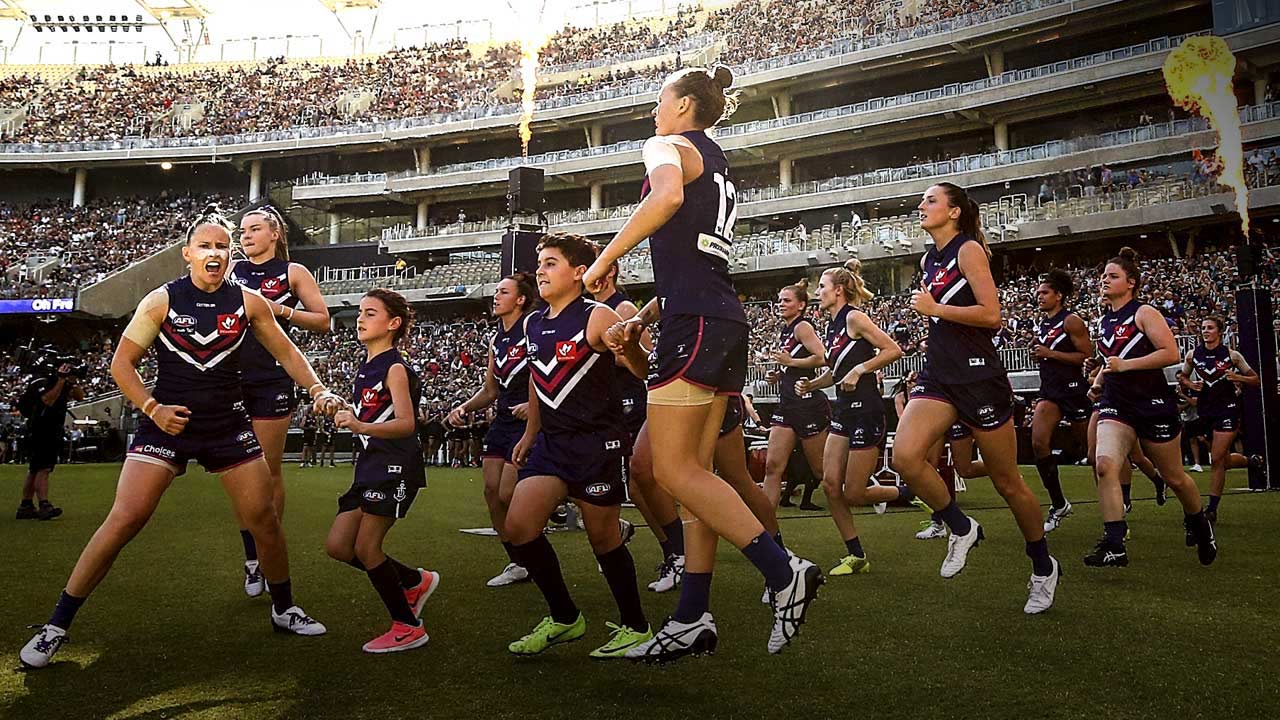 It was so loud out there.

There were 42,000 people at Optus Stadium in Perth last weekend for the first-ever footy game at the new stadium, and every time there was a hit or a good tackle or a goal or a good mark, the crowd was up and about.

It’s a privilege to be playing football in an elite sporting arena. You have to work hard but it’s a privilege, it really is. I just feel really lucky. I never thought the AFL Women’s competition would happen in my time. I always thought it was going to be a few years after I was playing footy.

When I was out there before that huge crowd, I could hear the noise in the background, but in my head I was so focused on what I was doing that I blocked it out. It wasn’t until the end of the game when the siren went that we sort of relaxed and I could hear how loud everything was.

And I went, ‘Oh wow, this is pretty special’.

I wanted to make sure all of us girls enjoyed that moment. You don’t know how often in your career you’re going to play in front of a crowd that big, and hopefully that’ll happen again at some stage. But you just don’t know.

Up by two goals at HT! Bring it home Freo ? #foreverfreo

THE TRUTH ABOUT SO-CALLED ‘SUPERMUMS’

I’m having the time of my life. I feel like I’ve got a really good balance in my life between work, footy, my daughter and my family.

The truth is, I get huge amounts of mother’s guilt.

Especially last year, when my daughter Alice was just a few months old when I was drafted, I had a lot of guilt. It comes and goes, but being a mum, there’s that pressure to be the person who’s always there 100 percent of the time. I guess it’s an inbuilt thing in your body as a mother. You just want to be there all the time, and given all that I’ve got going on in my life, I can’t be.

I try and balance my work and my footy, but there are some days when I’ve got to work during the day, then go to footy at night, so I drop Alice off at 7 o’clock in the morning and I don’t get to see her till 10 o’clock at night when she’s asleep. That can pull at the heartstrings a lot.

People talk about mother’s guilt and let me tell you, it’s a real thing and I don’t know if it will ever go away, no matter how long I play football for.

I often get called a ‘Supermum’ and I’m not always sure how I feel about that. Funnily enough, I’ve had a few conversations about this with our coach Michelle Cowan. When she broke through in the coaching world, they’d call her the Supermum too. It’s a compliment in some ways, but at the same time, we just sort of feel like we’re doing our thing.

Truth is, we’re really fortunate with all the opportunities that we get, but they don’t come from my doing, they come from the support I get around me. I’ve had great support from Alice’s grandparents so I can go off to training and games and know that my daughter is in really good hands. I feel really comfortable when I can’t be there, and without that support, it wouldn’t happen.

I don’t know if the mother’s guilt will ever go away, no matter how long I play football for.

I guess my story is a little bit different because I’m a single mum so that makes the ‘Supermum’ thing look even more impressive. There’s no hiding it, it’s just me and Alice doing our thing. Her dad is a part of her life, and and her other set of grandparents too. But her dad and I are not together anymore, so I’m the main carer for Alice. And I couldn’t do that without support.

I think in a way my situation is pretty unique, There are obviously a few other mums out there in the AFLW, but Alice was so young when I got drafted and I guess she’s been a part of it all from the moment everything started with the AFL Women’s competition.

Alice doesn’t understand it now, but give her a few years and one day she’ll be able to look back and understand the bigger picture of it all. Having me not there is hard for her at times, but she’ll have something pretty amazing to look back on.

The second year of AFL Women’s is different. From a second-year perspective, you have a better understanding of the facilities, the training, the resources. Things feel more comfortable, or at least they do to me, and everything feels a bit more predictable.

Last year being the inaugural season, it was difficult to know how everything was going to fall into place and there was a bit of stress because of that. There were so many players you’d never heard of, and when you came up against them, you weren’t sure what to expect. This year we’ve got more footage and a better understanding of who we’re coming up against. We’ve got game plans now.

We’ve got a better understanding of the girls in our own team as well. There’s a good feeling in the group at Freo this season. We are a lot more comfortable than last season, when the media and everyone put this huge expectation that we were going to win the competition with absolutely no information to back it up!

This year, coming off a challenging season last year when we finished second last, we knew what we had to work at. We knew where we were building towards, and what we wanted to do.

When I kicked two goals against Collingwood in Round Two, it was actually the first time I’ve hit the scoreboard. Last season I was good at racking up the possessions and working around the ground, but I didn’t have much of an opportunity to put the scoreboard pressure on. This season I’ve been looking to bring that to my game, so getting a couple of goals was great. Two shots, two goals. Pretty good strike rate!

I still can't wipe the smile off my face! What a night #foreverfreo

My weigh-in is around 56-and-a-half kilos, so I certainly weigh in on the lighter side at Freo. The positive is I’m a couple of kilos heaver than I was last season. Between seasons, I worked really hard with our strength and conditioning coach to build up muscle mass. I was essentially told just to eat, eat, eat. I was told to eat until I’m full and then when I’m full, eat 20 percent more. So I ate everything and anything, especially protein. I love my burgers.

I’m blessed to have a body type that tends to burn energy really well. I guess my strength is my running capacity, and that means I burn a lot of energy. The downside is it makes it really tricky to put on extra weight, so I have to work really hard on that. But I’m trying.

Although I’m only lightly framed, my relative strength is quite high. The strength and conditioning staff keep a close eye on my lifting and they’re really pleased with what I’ve been achieving. I’m definitely a lot stronger than I look.

Away from footy, I quite enjoy hitting the books and that side of things. I guess they often talk about the fact that I’m a mum and all that, but outside of footy I also work as an occupational therapist. I studied for five years at uni and have a Master’s degree. I quite enjoy my study and potentially down the track, I’ll hopefully go on to do a PhD in occupational therapy and keep moving up in that world too.