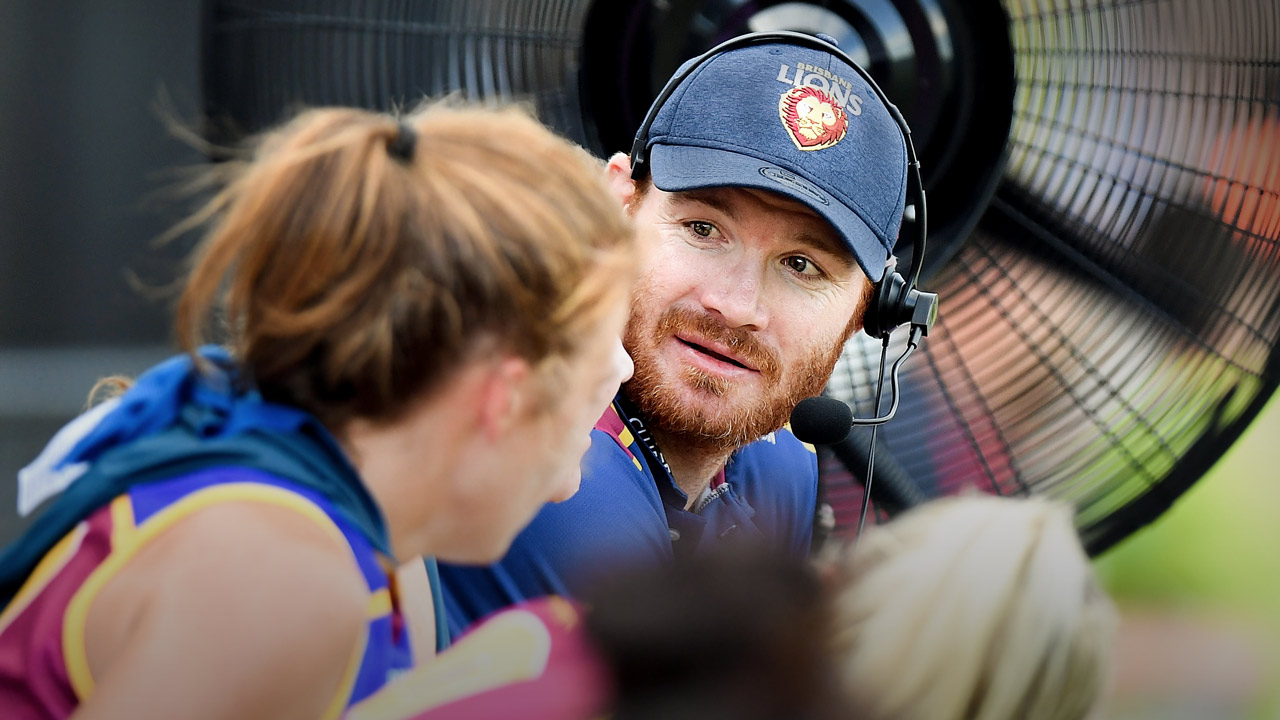 When I finished my playing career, I was physically shot and mentally cooked. I’d lost the love for the game. Two coaches were sacked, the team wasn’t playing great footy and I was playing fullback. It’s never fun playing fullback in a struggling team. We were conceding the most inside 50s of anyone in two of those final years. Let’s just say I saw a bit of footy.

Joining the Brisbane Lions AFLW coaching staff has given me a chance to take look at the game with fresh eyes and a different perspective. These are women with jobs and families and real-life experience. They’re playing footy for the pure joy of it.

Around match selections you’ll get someone asking, ‘Can you please let me know early if I’m playing this weekend because I’ll have to ask my boss to get Friday off.’

The boys don’t have to contend with anything like that.

It’s a fulltime job and something they’ve been groomed to do since childhood. Their No. 1 priority is to learn about the opposition, refine game plans, work on their craft, gym, recovery, nutrition and so on. They’re protected from real-life situations and problems.

Everything else comes second. At times, that includes family, which is pretty bloody sad when you think about it. Professional sport isn’t fun a lot of the time. It’s too hard. You’re under pressure to win-win-win and you’re pushing your body to its limits every day. Team comradery is what keeps you going but, from an enjoyment point of view, it can be a battle.

The women are more appreciative of the opportunity to get out there and play. AFLW has meant the pathway to footy that once was blocked from their early teens is now clear. There’s the chance to play at any age and, if they’re good enough, at a senior level.

To say the girls are more appreciative might sound like a knock on the boys, but it’s not their fault. A bloke who comes into a footy club as a 17-year-old doesn’t know much about the world outside of the sport and, if he’s any good at it, it will stay that way until he’s well into his 30s.

The girls know how hard it is in the real world. They study, work and grind out a living. They play footy on the weekends for the fun of it.

They love the game. It’s made me fall back in love with it, too.

BACK TO BACK GRAND FINALISTS!!! The very moment that final siren sounded and we qualified for the 2018 Grand Final! ?? #AllForOne

A SCIENTIST, A FULLBACK

Let me tell you a little about Leah Kaslar.

If you’ve watched many of our games, you’ll know she’s an absolute weapon on the field. She plays the same position I did so I know how good she is. She’s as competitive as they come, man or woman.

But there is much, much more to here than that.

She works as a scientist and has to fly to Newcastle a couple of times a week. And she lives near Coolangatta and that can be a three hour-plus round-trip to training. We train three times a week.

She amazes me. I’ve said to her, ‘Where do you find the energy to train let alone play on the weekends?’

And yet, when she’s on the field, she’s as hard as they come.

This team are the most resilient bunch of people I’ve ever known. At the start of the season we came together as a group and discussed three significant things that have happened in our lives.

They have been through so much. Hardship. Adversity. Deaths to close family members. Some of what was said was genuinely heartbreaking. It’s an absolute credit to them they have turned into the people they are.

They love the game. It’s made me fall back in love with it, too.

I was a bit naïve to all this before Craig Starcevich invited me to join his coaching team.

For example, I remember when Aasta O’Connor used to work upstairs at the club. She was always in the gym. It never occurred to me at the time that she herself was a good player with no opportunity to play senior footy. When I saw her running out for the Bulldogs, it struck me just how important this competition is. There won’t be another generation of girls denied the opportunity to pursue a career in footy, if that’s what they want to do.

The experience of season two has differed a bit from the first one.

Last year was amazing. Everything was new. We all just rode the wave.

This year, when we came back, there were expectations and nerves. They came back in really good condition and had great pre-seasons which led to great seasons. I’m talking about players like Jess Wuetschner, Ally Anderson and Kate Lutkins.

WOMEN’S FOOTY VS THE BLOKES

There are a few differences between a women’s footy environment and the one I came from.

You’ll ask the boys at training, ‘How’d that drill go?’

You ask the girls the same thing and they analyse everything. You almost have to say, ‘Righto, time-out, we’ve got to get to the next drill,’ otherwise we’d be standing there breaking everything down all night! They’re very switched on.

I was treading on eggshells a bit at first.

I’d shout out something like, ‘Pick up your man! I mean, woman. Pick up your woman! No, wait, that doesn’t sound right …’

There was another moment that cracked me up. Brent Staker was at training one day and he wasn’t happy with the intensity he was seeing out there.

He shouted, ‘Jesus! Come on! You’re training like a bunch of schoolgirls!’

‘Mate, I don’t know it that works,’ I said to him. ‘We do have a couple of schoolgirls out there.’

Everyone pissed themselves laughing. The girls saw the humour in it. They’ve been way more relaxed than us about these kinds of things from the start.

Another funny thing is the pre-game experience. You’ll walk into a blokes’ locker room before a game and there’ll be a bit of music playing. Typical male pump-up stuff. You know the kind I mean.

It’s pretty different when you walk into our dressing room now. It’s non-stop girl anthems and singalongs and songs to dance to. Britney, Spice Girls, the list goes on. If you closed your eyes, you would swear you were at a slumber party!

The most rewarding thing as a coach in the AFLW is seeing the immediate difference your advice can have on the players.

These women have had little-to-no one-on-one coaching in their lives. Whereas you’ll see small improvements in the boys you coach – again, they’ve been primed for this for a decade via the pathways, the academies and the under 18s – with the girls, it’s a quantum leap. The results are immediate.

When I’m doing bodywork, I’ll tell them, ‘Just get under their hips and nudge them under the ball.’

It’s really cool. There is so much to work with, so much improvement.

Tomorrow night it all begins again! Bring on 2018 ?? #AllForOne

We had our chairman’s dinner the other night.

It used to be for the male players, but that’s changed the last two years with the women’s team making the grand final both times. It’s changed the conversation.

Rhys Mathieson and Benny Keays were the early adopters among the boys. They knew all the girls and their stats last year. Now everyone is on board. Luke Hodge was talking to Stakes the other night and saying how much he’d enjoyed watching the AFLW this year, having not watched it much last season. That was a pretty common theme across the night.

It’s not surprising to me. The contests are thrilling and anyone who gives the game a chance will see that. I get frustrated when I see keyboard warriors trying to shoot the league down. By saying ‘They don’t score enough,’ or, ‘Their skills aren’t great,’ means you’re really not watching the game for what it is.

I love the way the girls compete and have a crack. You can never question their commitment, desire or bravery. They give their all. Skills will develop over time as the league evolves and the pathways develop.

As a coach, I constantly say to them, ‘All I want you to do  is compete’. That’s controllable. The bounce of the footy, how your opponent is playing, the umpiring and the weather – that’s all out of your hands. But the willingness to have a crack is completely within the individual.

But part of me likes the way it is now. Female athletes, with lives outside of the game, playing footy for the joy of it.

Winning is obviously important and, trust me, we’ll be leaving no stone unturned ahead of the grand final against the Bulldogs. But I reckon in life there are wins that don’t show up on a scoreboard.