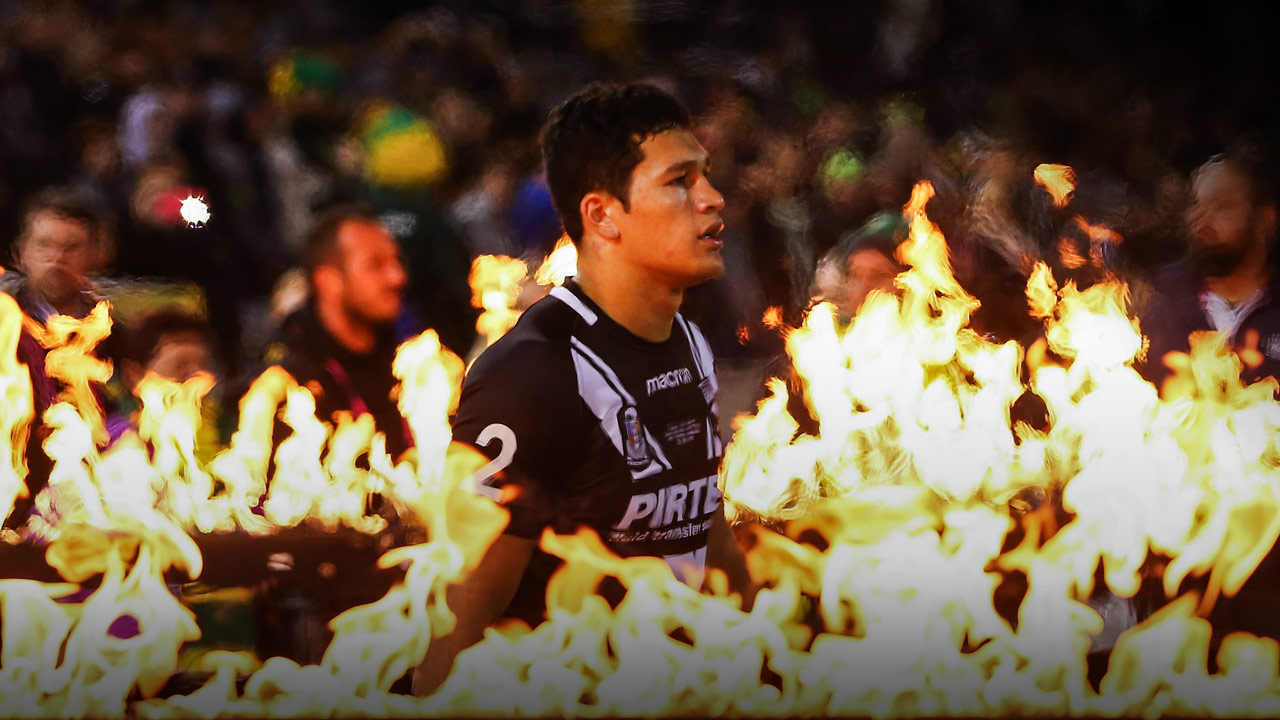 It’s hard to put into words what it’s like having a figure like that in your family. An ancestor like that to aspire to. It’s very cool.

Obviously, I never met him – he died in Wellington during a meeting in parliament in 1967 – but from the stories I’ve heard, from my uncles, from grandad, from mum, he was a very hard man. He was a union man, a Labour man.

Above all, a great man. Not only a great footballer, a great representative of New Zealand, of Maori people.

In 1936, he captained the Manakau club in Auckland, and brought a whole lot of Maori players to the club. They became very strong. When they picked New Zealand Maori, they were all but one from Auckland.

Jack Hemi was one of the players that came to Manakau. As did the great George Nepia, a dual international, a legend of Kiwi sport. George Nepia was like New Zealand’s first sporting superstar. He spoke at great-grandfather’s funeral.

Old Steve captained Jack and George when they played for the Kiwis in three Tests in 1936-37 against England and Australia. It would’ve been a massive honour. To be the first Maori to do that, in what you could maybe call ‘less enlightened’ times, it points to the mana of the man.

I can’t wait to do this again! I’m Grateful and honoured to put this black and white jersey on and represent my family, my country and my club this weekend ⚫️⚪️?? #teiwikiwi

They reckon there were 10,000 at the game, most to see George Nepia, who’d been a famous All Blacks fullback but was just back from playing league in England.

They reckon the Aussies might’ve enjoyed a fair bit of ‘hospitality’ before the match. And the Aussie press were critical of the referee. (Ha! Sour grapes!)

There are old photos of great-grandfather on the internet leading the haka, running around in his headgear. It’s cool finding that old stuff.

I also found this quote of his after the Maori played England:

‘In this rugby league game of ours, there is no room for the sniveller, the squealer or the pointer, and be he or she an administrator, official, player, he or she must display a sense of impartiality, and a degree of tolerance to all who have contributed to maintaining this modern brand of football.

‘As a Maori, a great deal of my efforts are taken up with the propagation of the game among my people and the playing of this England v Maori game was a long cherished ideal.

‘My friends when you return to your homes take back the good wishes of a people who responded without equivocation to the stirring call of the Mother Country. Take back also the memory that in this vast British Empire of ours the Maori is included in the term New Zealander.’

UNION MAN BUT NOT RUGBY

Great-grandfather was born in Kirikiri, Thames in 1910. He was the only child, though he had a half-brother from his mum’s previous marriage. He also had about 30 other siblings who his mum and dad and fostered.

As a young bloke, he worked as a labourer. Worked for the maritime union. He was involved in waterfront disputes. He’d go around convincing Maori not to break strikes.

In fact, you weren’t even allowed to talk about rugby union. If you talked about playing rugby, my grandfather would shut it down and say, ‘You’re never playing that sport!’ He was league through-and-through. And he used to talk about how staunch his dad was about league.

It was the same throughout our family. We were all league. Union was a big no-no.

To be the first Maori to do that, in what you could maybe call ‘less enlightened’ times, it points to the mana of the man.

I never really thought about why grandad and his dad were so hard-core for rugby league. But it might’ve been to do with the fact the old boy was a union man, a Labour man.

Like everywhere, rugby in New Zealand was amateur, league was professional. Well, semi-professional. Players all had jobs. League was a working-man’s sport. So the old boy was probably sticking up for the workers. He was a union man but not a rugby union man.

He’d tell Maori not to break strikes, to stay in solidarity with striking workers. He wanted Maori to get ahead. He knew strength was in numbers. He believed in fairness. Men being equal.

I reckon that flowed into his love for rugby league. For him, it would’ve been about fairness – paying people a fair wage for fair work. Cover their wages if they got injured. League did that. Rugby union, you had to look after yourself.

But mainly, according to grandad and mum and my uncles, the old boy Steve just loved the game. Just loved rugby league. Both he and grandfather were the same. Had a lot of passion for it.

TRUE TO MY ROOTS

Our family came over to Australia from Hamilton in the Waikato when I was five years old. My dad Joe – he’s of Polish origin, hence the other half of my name – saw better job opportunities. All dad’s family is here, too.

Growing up in Penrith, my uncle Carl, mum’s cousin, used to teach us about Maori culture. He’d take us to his in-laws’ property in the bush, we’d camp out, have a sleepover. And we’d do up a hangi. And we’d learn the meaning of things. I’ve learned some language. I’ve learned maybe five different hakas.

Living in Australia since I was really young, there’s a chance I wouldn’t learn any of these things. So I’m very grateful to my uncle for teaching us, my brothers and I, things I might never have learned.

It was so we could realise where we’ve come from, where our ancestors had come from; who they were. Who we are. They were our roots.

It was the same throughout our family. We were all league. Union was a big no-no.

When I made my debut for Penrith – against Canberra in 2014 – my family came from everywhere. I don’t know how many tickets I had to get. Maybe 60. It was a very big thing for our family.

When I debuted for the Kiwis in the Anzac Test against Australia in 2016, it was bigger again. It was a very emotional occasion for me, obviously. But it was even bigger for my family.

I’d had a bit of a struggle to get there, two or three false starts because of injury and suspension. But when I eventually did play – it was in Newcastle – there were tears in my eyes. It was the same for all my family. It was very emotional, the journey we’d been on.

Again, it’s hard to put into words what it’s like to be the first to represent New Zealand since grandpa Steve. It meant everything. All those years learning about our culture, learning about our ancestors and then to follow in the footsteps of such a great man. I still get sort of teary about it today.

Can't wait for this opportunity tomorrow night! Very grateful and humble to be able to wear this jumper tomorrow night! I can't wait! ✊?✊?✊? #teiwikiwi #GOTHEKIWIS Thanks to @jeremy_smith13 for presenting me with my jersey! #theman

When I was 17, I had to choose between playing footy for New Zealand or Australia. This country’s done so much for us. I love Australia. So it was a tough decision in that regard.

But given my great-grandfather, given all the stuff I’d learned, it was a no-brainer to follow in his footsteps.

Ultimately – and everyone who’s had to make a similar decision will tell you the same – it’s where you feel happiest, most comfortable. When you’re happy and comfortable, you play your best football.

In 2013, I got selected to play for Australian Schoolboys but I pulled out because the tour clashed with the finals of the under-20s. I also had a goal to play for the Junior Kiwis. So I stayed home, we won the under-20s grand final and I was lucky enough to get picked for the Kiwis.

Being in that group, with those guys, it felt right. Facing a haka would not have felt right.

Awesome way to start the World Cup with a win! ✊? I loved every minute playing along these boys! Thanks for all the support! ✊? #teiwikiwi

Great-grandfather was brought up Mormon and today I’m a Mormon. My religion and faith mean everything to me. It is the foundation I have built my life and my little family’s life around. It’s shaped the person I am today. I’m grateful for the blessings I’ve received through the church from our heavenly father.

I feel lucky to have parents who brought me up with the gospel and practise those things: the advice to stay on a straight and narrow path.

In 2015, I married my beautiful wife Purdy. We have a son, Orlando, who’s 10 months, and another on the way; a little girl, due October 23. And we’ll be bringing them up with the gospel. We believe that families are forever. That’s my main goal in life – to make a life for my children and be with my family for eternity.

Happy Easter to everyone from the Watene-Zelezniak's ❤?? orlandos first easter ?we enjoyed this long weekend, with family and especially remembering what Jesus Christ and Heavenly Father did for us! We're forever thankful! ❤ we hope everyone had a safe and enjoyable weekend?? much love from my little family #WZs

Every Sunday, even if I’m playing footy, I’ll go to church. If it’s a Sunday game, I’ll attend the 9am session. When I’m not playing, it’ll be one o’clock until four. Then straight after, we have a big feed. There’s always a family get-together.

At least once a year, I’ll get back to see family in Hamilton. Always for the Warriors game and another time; over the holidays, usually. All the family are Warriors fans but they’re Panthers fans, too!