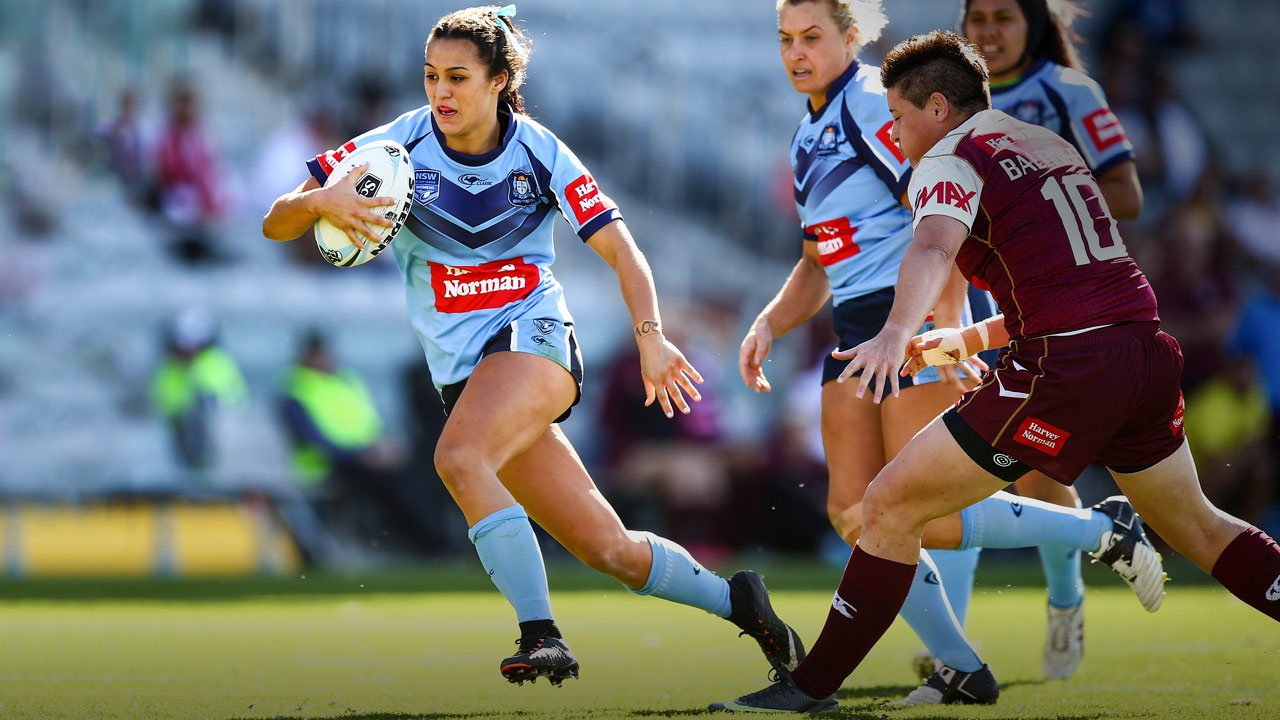 He stole my heart, not my dream

He stole my heart, not my dream

I became pregnant with Carter when I was in Year 11.

I finished up school then. Said goodbye to Woolooware High, no Year 12.

Finding out that I was going to be a mum at age 16 was crazy. It was a major life change for someone whose main focus had always been sport. It wasn’t easy to take.

That first year raising my son was a reality check: so, this is what it’s really like to be a mother. It was hectic. I’ve got four brothers, I was the only girl growing up. I can now see myself as being pretty spoilt, taking things for granted when I was a kid.

Parenting a child is not easy. But I love being a mum. It was all worth it. It still is. And with help, I kept chasing my dreams.

I was lucky to have the support of amazing parents, who Carter and I still live with. They were able to open my eyes and help me to see that becoming a mum was just a new beginning; not the end of the world but a great new step in my life. They knew that I had too much talent to give up, just because I’d had a child.

Carter is now seven. In the past two years, he’s watched his mum break a 17-year drought for NSW against Queensland and win a Rugby League World Cup. On Friday, he’ll watch our Blues team try to make it three in a row against the Maroons, in the first women’s game officially called ‘State of Origin’. Later this year, he’ll watch me play in the first-ever women’s NRL competition.

That will be a pinch-me moment. I’m lucky that there’s been plenty of those in rugby league. But they don’t come easy.

On a normal day, I leave early in the morning to go and do my sprint coaching, working under the renowned Eastern Suburbs sprint guru, Roger Fabri. I leave before Carty even wakes up. Then I get home, get Carty ready for school and drop him off.

I try to train during the day, so in the afternoon I have time to hang out with him. Sometimes we have team training in the afternoon, so it can be a bit of a struggle to fit it all in. It’s a juggling act, that’s for sure, and it wouldn’t happen without the support of mum and dad.

Carter has been the best thing that’s happened to me, even though I had him super-young. He’s a ball of fun, full of life. He’s always saying funny things that make me laugh. Sometimes when he says things, I ask him, ‘What are you even saying?!’ But then, I see a little bit of me in him and think, ‘You gave that to him – don’t be complaining!’

Finding out that I was going to be a mum at age 16 was crazy.

Carty plays footy, too. He’s into his fourth year now, he rips in and just loves it. It’s great that I get to watch him play, not just the other way around.

Carty loves watching me play. He’ll be there on Friday night at North Sydney Oval for Origin. He’s at pretty much every one of my games. He’s there’s cheering me on and supporting me, then he comes down to the field afterwards, we have a little walk-around and take a photo together.

He also gets to support his aunty Maddie, so he’s very lucky. That’s Maddison Studdon, our new NSW captain, our halfback – and someone whose encouragement changed my life.

HOW IT ALL BEGAN

I grew up playing touch footy with Mads and Sammy Bremner, as well as playing netball and Oz Tag. For a year or two, I knew Mads was playing rugby league and I watched a couple of games.

She always encouraged me to give it a go. Eventually, I thought, ‘Why not?’

I went down to the Helensburgh Tiger Lillies club, between Sutherland Shire and Wollongong, for the 2014 season. The timing wasn’t great – both those girls were injured that year, so I didn’t even get to play with them!

But as soon as I played rugby league, I loved it. I’m very thankful to Mads for introducing me to the game.

I felt like I had the basic skills, thanks to my touch and Oz Tag background, though the contact took some getting used to. My first game, I just got that first hit-up and tackle out of the way and then I felt more comfortable. And I had played some contact footy before – though it was something totally different.

Carter has been the best thing that’s happened to me, even though I had him super-young. He’s a ball of fun, full of life.

The year before I started in rugby league, I played American football in the Legends Football League. I’d felt some big hits, albeit with the pads on. Hitting someone with my shoulder in league was a bit different.

While I found all the stoppages in the game a bit frustrating, LFL was really good. It taught me discipline. We had to go to training every Sunday, really intense training. We had hard strength and conditioning work every week. There was lots of running, because I was a wide receiver. I’d run a long route, catch a ball, jog back, do that over and over again.

LFL attracted a lot of criticism that I found sad and unnecessary. Obviously, the lingerie uniform side of things is not ideal but it is what it is. The athleticism of some of the women playing those games was extraordinary. We had athletes from all different sports, stacked with different talents. I still have friends from LFL that I do sprint training with. Queensland’s Kody House played LFL and now we’re about to face each other again in Origin.

Our NSW Surge team won the LFL in 2013. The next year, my first season of rugby league went really well – and then things started to happen fast.

I didn’t expect to be picked in the NSW squad in 2015 but when I got the opportunity, I took it with both hands and made the team. From there, I made the Jillaroos squad for the Auckland Nines the following season and made my Test debut that year, too.

The 2016 NSW-Queensland game was the most unreal feeling, one of the highlights of my career. In my 2015 debut, we had a draw with the Maroons in Townsville. To almost get there was exciting but we knew that come next year on the Gold Coast, we just wanted to get it done, go one step further and actually beat them.

Coming into camp, you heard the stories of the girls that have been there for years, heard their struggles of what it had been like to not get a win for 17 years. I was really proud to be part of that team that got the very first win. It was an awesome feeling, the girls were pumped.

To back it up last year was massive. Hopefully on Friday, we can get three in a row and turn this into an extended run of success for NSW.

As soon as I played rugby league, I loved it.

And wearing the green and gold … what an honour. Winning the World Cup last year was incredible. I wouldn’t have dreamed that I’d be in the World Cup squad ever, so to be able to play for Australia in that final was an amazing feeling.

Going against the Kiwi Ferns, it was one of the toughest games I’ve ever played and went right down to the bell. It was very physical.

The fact that we got to play all our pool games at Shark Park, in my hometown with all my friends and family watching, was really special, too. The entire experience was something I’ll never forget.

Through my career so far, speed and agility have been my strengths. Coming from netball, I naturally liked to work on my agility a lot. I’ve been doing sprint training for the past few years under Roger. Bringing those high-end technical skills into my game has been awesome.

And I’ve found a passion working under Roger as a coach. I’ve enjoyed passing on to others what I’ve learned about running; really running, with a proper sprinting technique to maximise speed.

I see coaching and personal training as a true career path for me – though professional footy is the ultimate dream and perhaps it’s one that can eventually come true for women’s rugby league players.

The girls have always just called this interstate game State of Origin anyway, because that’s how we see it. But for it to be made official is really cool for us and it’s a big step for the women’s game, to be given recognition equal to the men.

I loved Anthony Minichiello growing up, he was probably my idol when I was watching Origin and cheering for the Blues to win. As the women’s game grows in profile, perhaps the next generation of girls can grow up not just with men’s stars as their heroes, but female players too.

This is an enormous year for women’s rugby league. I never thought in my career that I would be playing for an NRL team, pulling on an NRL jersey for an official women’s competition.

Playing for the Roosters – they’re a great club and I can’t wait for the competition to start. There’s a lot of footy before then, it’s hard not to look forward to it. It’s always in the back of my mind.

Through my career so far, speed and agility have been my strengths. Coming from netball, I naturally liked to work on my agility a lot.

I like the round robin format for the inaugural season, it should make for really strong games with four teams; the Roosters, Dragons, Broncos and Warriors. Each game will be really tight and tough, showing people what the women’s game is all about.

And this is where it all starts for the big dream: women’s rugby league as a full-time professional career option.

Now that we’re in the semi-professional space, it’s still a juggling act with footy, work and being mum to a little boy.

When we can be playing footy as a job – happy days. We’ll get there.