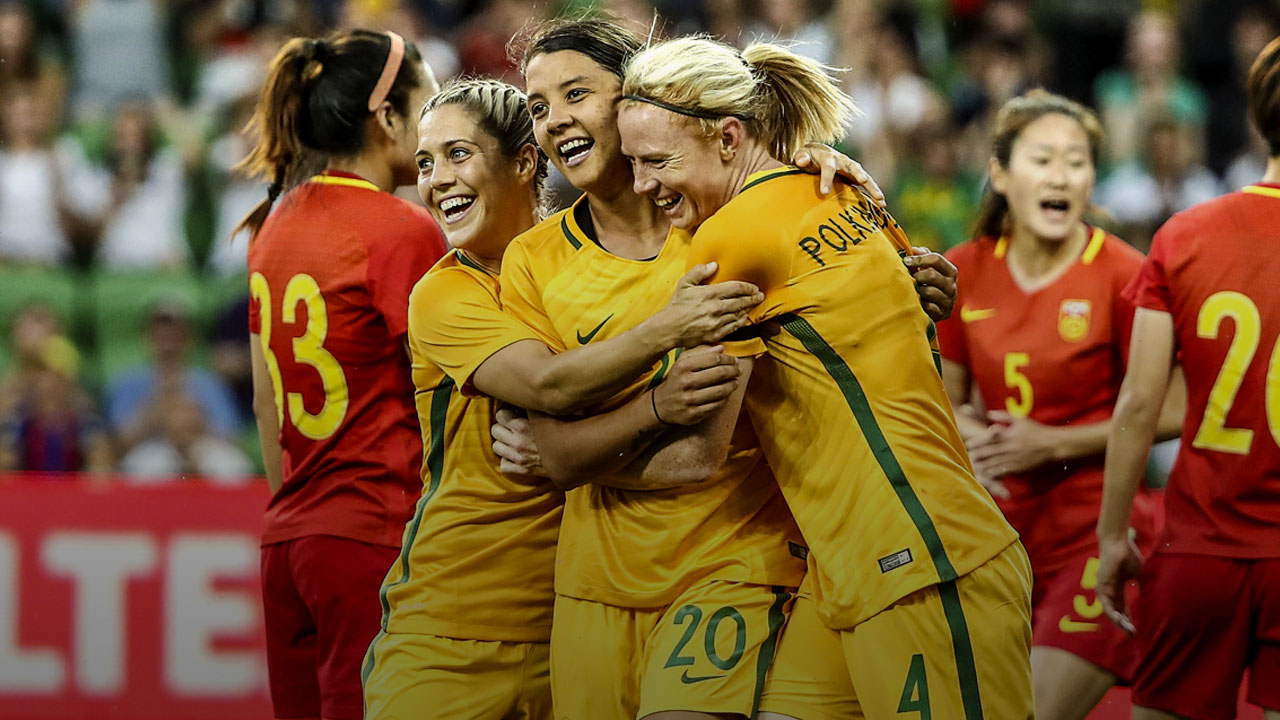 To be the best team in the world, you must have an X-Factor.

The US had it with Abby Wambach.

Brazil have had it for a long time with Marta.

We have it with Sam Kerr.

Lisa De Vanna has been that sort of player for us. She’d tear defences apart as a starter or come off the bench and just change the game and she’s still a very important member of our squad.

You need those players who, with a moment of brilliance, can swing momentum in your favour. Sam is it now. She terrorises the opposition. If you want to set yourself apart – if you want to go from being one of the best teams to the very best – you can’t do it without that.

Sam has always been a freakish talent. Even when she was 15 or 16 and coming into the national team you knew she had something special. She matured a lot on and off the field in the last few years – moving out of home, playing overseas and getting consistent game-time.

She’s been unlucky with a few injuries that set her back, but it just shows her character that she’s been able to come through that the way she has. She gives us so much confidence. She has that influence on people around her. That’s what you need in a number nine.

It’s hard to judge who’s the best player in the world at any given time, but Sam’s certainly among the elite. And she’s definitely got the potential to be the very best.

You need those players who, with a moment of brilliance, can swing momentum in your favour. Sam is it now. She terrorises the opposition. If you want to set yourself apart – if you want to go from being one of the best teams to the very best – you can’t do it without that.

People ask me what she’s like. She is switched on at training and game-time but, off the field, she’s a bit of a character and brings a lot of fun to the group. I wouldn’t call her a prankster. She just likes to have a laugh and get everyone in good spirits.

She’ll joke around and is pretty easygoing.

I don’t know what she thinks of all the publicity she gets, it’s not something she talks about. She certainly doesn’t go around reminding everybody how good she is. She’s very grounded. I don’t think any of this is going to go to her head.

I’ve been doing this for a long time now. I made my Matildas debut in 2006, when I was 17, and I think I’m in a good position to judge why we’ve had this significant rise in fortunes over the last 12-to-18 months.

A lot of factors have come together. We’ve had a great bunch of young, really talented players who have come through after playing for the Young Matildas. They’re all reaching 30, 40 or 50 caps now. That’s experience we didn’t have a few years ago.

Alen Stajcic came in as coach and really applied himself. He is very thorough in his preparation. Everyone knows their role.

He wanted two players genuinely competing for every spot in the starting XI and that depth has become a reality. If you want to be winning tournaments you need to be able to use all of your players to ensure everyone’s fresh at the business end and he does that.

We’ve got players who can come off the bench and do a job and that’s really important.

The other thing is the team culture that has developed under him. Everyone wants to work hard for each other and that’s showing in our performances.

Personally, it’s a great time to be a part of the Matildas set-up. The success we’ve had recently has given me an added boost and further motivation to get more out of myself.

If I get some game-time against China in Geelong on Sunday,  it will be my 99th appearance for the Matildas.

When you get your first cap you don’t really think about how many caps you might get after that, so to be close to the 100 mark isn’t something I ever envisaged or planned on doing. I just keep chipping away and enjoying every single game, because pulling on the Matildas jersey is so special.

My little brother and my dad have kept an eye on the numbers more than me and they remind me, so I knew it was coming up.

Only a few other players have reached 100 games and when you rattle off the names – people like Cheryl Salisbury, Heather Garriock, Lisa De Vanna, Joey Peters and Anissa Tann – that’s very special company to be in. It would be a real honour to join them.

I take the knocks where I play in defence so I’m proud of my longevity and resilience. I’ve got the character and maturity to know that during those times when things aren’t going your way, you keep at it and don’t give up. That’s how you stay at the top level.

Like any athlete, I’ve made what most people call sacrifices for the sake of my career. I call them choices. I’ve made choices that have enabled me to get where I am and other people have made different choices and obviously had different outcomes. I wanted to be the best athlete I could be.

I’m 28 and I’ve got a long way to go yet. I’m feeling really good mentally and physically. I’m not looking too far ahead. I haven’t yet achieved what I want to in football. I’ve got big goals.

The Matildas are definitely feeling the love from the Australian public.

The sold-out crowd against Brazil in Penrith in September was monumental for football in Australia and women’s football in particular. It was built on the back of the success we’ve had and the type of football we play. It’s entertaining.

People are taking notice of us and want to watch us play because they enjoy it. It’s important not to differentiate between men’s and women’s football here. What we play is sheer, good football. Dads are bringing their sons to watch, as well as women and girls. The whole family comes.

It’s a credit to the hard work the girls have put in, not just over the last couple of years but by all of the Matildas who came before us and laid a platform.

I’m 28 and I’ve got a long way to go yet. I’m feeling really good mentally and physically. I’m not looking too far ahead. I haven’t yet achieved what I want to in football. I’ve got big goals.

As a group, we’ve talked a bit about the world rankings and where we sit. Staj likes to communicate his view on certain information and if you look at the rankings, you’ll see they’ve become a lot more compressed.

We’re sixth, but there’s very little between third and sixth and the top two teams aren’t that much further ahead. The point is there’s not a big gap between teams in the top 10, and even in the top 20, and anyone can beat anyone on their day.

So we have to be wary of other teams, but we can also aim high. The level we want to reach is definitely within our grasp.

But if you want to be the best team in the world, you have to show that consistency in your game and be able to back up good results. Even when you don’t play well, you’ve got to be able to find a way to win.

We’ve talked about consistency and we’re starting to see that.

This second game against China is really important because at the Asian Cup next year they’re going to be one of the teams we’re competing against for places at the World Cup.

The psychological edge of beating them twice in a row and putting that fear into them for the next time they play us would be invaluable.

Everything we’re doing is in preparation for the Asian Cup, because if we don’t do well enough in that tournament there won’t be a World Cup.

So the future really is now.