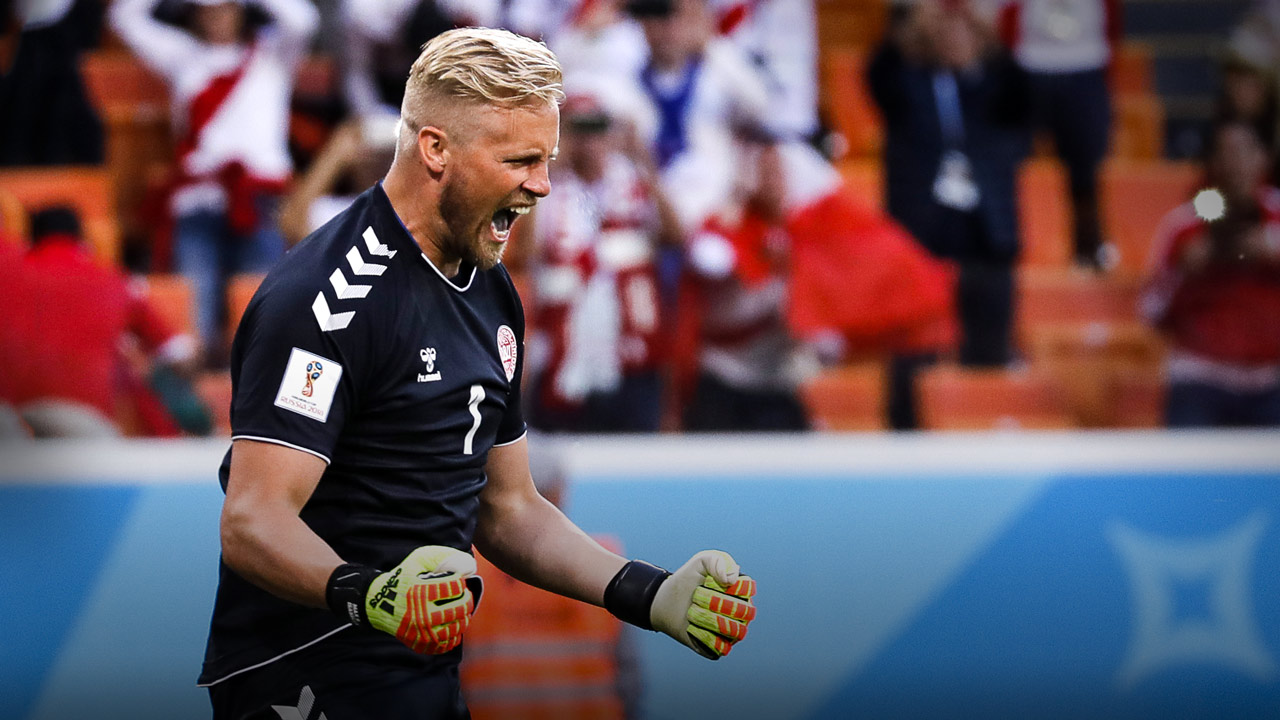 The man Australia must beat

The man Australia must beat

I never got the chance to play at a World Cup, but I was fortunate enough to play at two European Championships and to captain Austria. That makes me incredibly proud.

I’ll be watching the World Cup with interest – especially Australia’s group with France, Denmark and Peru.

For some friends and former teammates, it’s going to be a big month.

With N’Golo Kante at Leicester, I shared one of the biggest stories in sport’s history. There is nothing better than that. He’s at Chelsea now but that bond will always be there.

N’Golo was the motor in our team. I remember him scoring a screamer against Watford. It was a blooper from the keeper but N’Golo was so composed and his footwork was so good that he deserved all the credit.

N’Golo is one of the best midfielders I have ever seen. He is one of the main reasons that France are a chance of winning the tournament.

I don’t know if there is anyone else that has his work rate. Every game, non-stop. He is simply everywhere on the field. Recoveries, interceptions, tackles – he is among the best in the world.

No matter what happens around him, he is always smiling. You could say or do anything to him and he still can’t wipe that smile off his face. He’ll get kicked or fouled, still smiling.

Denmark has another one of my friends from Leicester playing for them, Kasper Schmeichel.

At the start of that 2015-16 season with Leicester, we had a very leaky defence. After nine games we had not kept one clean sheet.

One day, the coach Claudio Ranieri offered to buy us all pizzas if we could go just one game without conceding. We won the next game 1-0 against Crystal Palace and Claudio shouted us all a night out at an Italian restaurant.

It was a turning point and we went on to keep 15 clean sheets that season. We couldn’t have done that without Kasper’s incredible goalkeeping.

Like his father, Peter, Kasper is destined to play for a big club.

He is very ambitious and a great leader. He is the mood-maker with a big voice in the training room and he wants to win every game.

He will play a similar role for Denmark, I expect. I hope he does well, just so he can return to Leicester happy!

I played alongside one of Peru’s attackers, Jefferson Farfán, at Schalke. He was an outstanding footballer and one of the best right wingers I have ever seen.

He is fast, powerful and scores many incredible goals. The downside of his game is that he is 100 percent right-footed. I think he must only use his left foot to drive and to stand up with!

But he is a very fun guy as well and always has a smile on his face, similar to N’Golo. He has a very funny personality and it’s unfortunate that in football you can’t stay friends with everyone.

Over the course of a career you meet countless people but it’s impossible to stay in contact with them all.

He won’t be playing for Australia, but I know Mark Schwarzer very well from his time at Leicester. He’s a great guy and I love his dry sense of humour.

Mark’s parents were German. He can speak the language and hold a conversation. At Leicester, Mark, Robert Huth and I would have our own little German table wherever we went. That was a big part in making me feel at home I think!

Mark was the grandpa of the kindergarten class that we were when we won the Premier League. His personality was important because it calmed the group when we could have become overexcited.

I think France will top Group C but after that it is a very even match up. Any one of Australia, Denmark and Peru could go through in second. It all depends on how each team deals with the occasion.

I hope for everyone in Australia that you guys go well!

As for the winner, I think it will be Germany.

No country has ever won two World Cups in a row but I think that is about to happen. Real Madrid became the first team to win three Champions League titles in a row. Why can’t Germany win two World Cups?

They are a pure tournament team, with quality players all over the pitch. They always do well in qualifying but then somehow lift to another level again when the actual tournament starts.

I think only being a footballer is boring. From the outside, it all seems very spectacular playing at the highest level. But sometimes it just feels like a lot of travel and a life spent running around after a ball.

Don’t get me wrong, I AM passionate about that. Otherwise I wouldn’t do it. But I have other interests as well, that keep me inspired.

I don’t want to be that player who goes home to sit on the couch playing FIFA or binge-watching another TV series. That’s not me. I need to be constantly driving towards the next goal. The second I sit still, I feel like I’m going to get sick.

That’s how No Fuchs Given started. It was my way of life that I started filming for an online video series. I’d mess around with my Leicester City teammates, doing things like kick balls at our centre back Robert Huth’s backside.

It was all just a joke, but the response was huge! I had some T-shirts made up and the demand for the product was so high that I had to come up with new designs for another run.

Wearing those shirts became a statement for people who wanted to live by that mantra: No Fuchs Given.

After our Premier League-winning season, I had an interview at a university in Leicester. It was supposed to be very casual but turned into an event where I would be speaking in front of 500 people.

I’m used to playing football in front of massive crowds all around the world but that was something I wasn’t used to. I didn’t realise the irony of feeling so nervous while wearing a No Fuchs Given shirt until I looked in a mirror. That reminded me of what I’m all about and what had made me successful in the first place.

I went out there and did the interview. Why waste energy worrying?

Everyone has situations like that in life, where they feel uncomfortable or they are scared but if you take the challenges as they come and stop giving so many ‘Fuchs’, you can overcome so many things.

That’s the way I live my life and it’s the attitude I want to give to other people. I want them to feel bolder, just by the clothes they wear.

At the age of 12, I was told I would never be good enough to play professional football. I was rejected by an academy in Austria without any feedback. No list of things for me to work on, just a cold hard, ‘You’ll never make it’.

That hurts a lot as a kid. But I didn’t want to give up on my dream. It just made me more determined.

I worked hard and eventually got the chance to play for a fourth division Austrian team called Wiener Neustadt. It was my first chance to play senior football and I was lucky enough to be working with a great coach, Sepp Schneider.

I’ll never forget this one thing that he said to the group.

In 2015, I started for Schalke against Real Madrid at the Bernabéu. It was the Champions League round of 16 and everything was on the line. 70,000 fans packed into the stadium for the second leg.

They had a very good team: Ronaldo, Bale, Kroos and Benzema to name a few. But I scored the first goal of the match. It doesn’t get better than that.

What a great moment to remember for me. Today three years ago with @s04 playing in the @championsleague against @realmadrid and scoring the first goal. Final score 3:4 for Schalke. Will always be in my memories! #S04 #UEFA #ChampionsLeague

It was an incredible moment and we went on to win 4-3. It wasn’t enough. We were knocked out 5-4 on aggregate but it was a huge thing for me personally. It felt like my whole career had come full circle.

A little more than a year later, I became a Premier League champion with Leicester.

It was the two-year anniversary recently and I still find it really hard to put my emotions into words. 5000-1 odds and we did it! You can’t make sense of that.

I remember the parade like it was yesterday. Hundreds of thousands of people on the streets of Leicester. A quarter of a million people there to celebrate with us in Victoria Park. It was such a historic thing to be a part of it.

Great thinking about the day when the city turned blue and white. Can you spot yourself? ? #LCFC #Memories #History

When I think about how that academy in Austria said I’d never make it, I get frustrated. It could have been the end for me. Just like it could be the end for any other kid that has been in that position.

That’s why the system in Europe is not good enough. So many kids don’t get the chance to live their dreams.

I started the Fox Soccer Academy to address that problem. It’s is about giving kids a second chance. I want to show junior footballers that it’s about using those setbacks as extra motivation.

We’re coaching kids in New York, the UK and Austria currently. But to me, the most important part isn’t whether they ever get signed by a club. It’s about providing an alternative pathway to becoming a professional footballer.

It’s about that second chance.