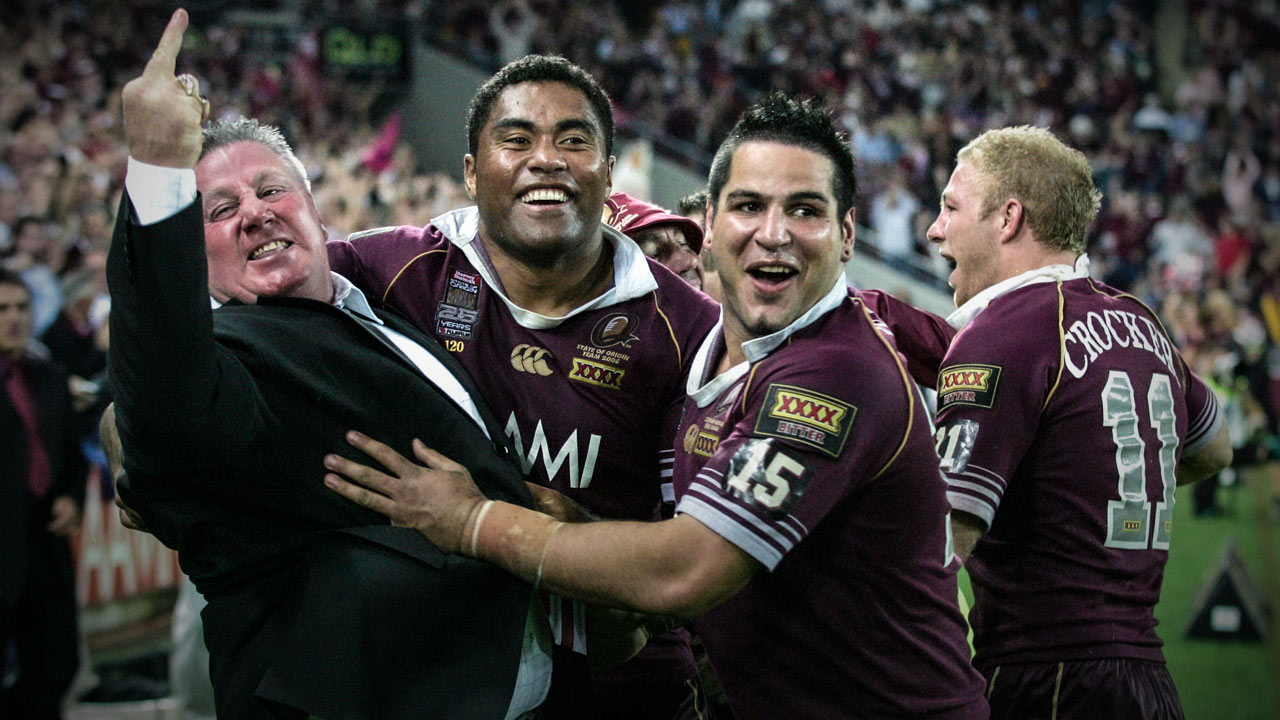 Snakes on a plane

Snakes on a plane

I never backed off from the physical side of State of Origin – the violent side of it as it was back then, in the early 1980s.

I had my motivation and it was like everyone south of the border – not just the NSW players – had provided it for me.

I made a decision early on – before a blow had been struck, way ahead of the first Origin game – that I was going to stand up for myself and my team regardless of who was in the NSW team and what they thought about us.

To me, they and their opinion of the Queensland side didn’t matter and if they wanted to test that theory out on the field then I was ready, set, go. Yeah.

I was pretty friendly to the blokes in my own team, but not nearly as friendly with the opposition.

I loved playing Origin. I can’t tell you how much. It came at a very important time of my career. I was 21 when they introduced it in 1980 and I’d just come back from New Zealand on my first tour with the Australian team. Getting picked to represent my country was a very powerful moment for me.

I got a bad injury in our last game over there, against Auckland. I had a ruptured blood vessel in my thigh from a cork and it was really painfully swollen. I remember I lay on the rubbing table in the medical room for most of the night so that they could ice it and treat it and try to get me moving.

Then I had to go to the airport in the morning to fly home with the team and my economy seat was in the middle of a row where I was going to have to squeeze in and have no room.

A few rows ahead four players had seats next to an exit, where there was space to stretch your legs out and keep them straight. My leg was giving me grief, so I went up and asked if one of them would swap seats with me.

All four of them were New South Welshmen. Rohan Hancock and I were the only players from the old Queensland side, pre-Origin, that had made the squad. I got four answers back that were ‘get f***d’, ‘f*** off’, ‘f*** you’ and ‘suffer’, or words to that effect.

I stood up for the entire flight apart from take-off and landing because it was just too uncomfortable to sit down and I didn’t want to let the injury get worse.

It took me a fortnight to get on top of that injury and by the time Origin came around I was still feeling it. I probably carried it a bit into the game, but there was no way on earth I was going to miss it.

I was playing for Redcliffe at the time and after getting back from New Zealand I went straight to the club physio and started getting treatment. Every day, sometimes twice a day.

I was right. It gave rugby league the massive shot in the arm it desperately needed.

We’d gone down to Sydney for the second game of the old inter-state series that year having been flogged in the first. The squad for the Kiwi tour wasn’t picked until after game two.

We arrived on Sunday for the Tuesday game and there was a TV show with Frank Hyde hosting and a panel of journalists and other pundits – the mind boggles now – but it was a one-hour show and they never mentioned the inter-state game until about a minute from the end.

Even then it was just a token mention. Somebody said, ‘By the way, the easy beats are in town. If anyone’s interested the game’s on Tuesday night at Leichhardt Oval. I’m sure you want to get out there’.

We were a lot more competitive in that match, but it wasn’t a great night. We didn’t have proper transport arranged and had to hail cabs to leave the ground after the game. Hardly anyone turned up to watch. They gave the official crowd at about 1500.

Today’s fans who weren’t around then wouldn’t know about it, but the game was in trouble. It needed saving.

From a representative point of view there was Australia, Great Britain, France and New Zealand in the international game and Australia had become unbeatable.

Queensland couldn’t win an inter-state game as long as their arses pointed to the ground and when you got a crowd like the one we had at Leichhardt, that was really something to worry about.

All that affects sponsorship, so the future of the game was at a crossroads. It was under the microscope. It badly needed something to reignite the enthusiasm of the fans and encourage companies to put their money into backing it.

There had to be a saviour or else, and Origin was it – a concept that changed the future of the game.

They went through their old methods with a fine-tooth comb and up with a new way. A more exciting way. Origin was the catalyst for a major change in the way not only league, but many sports were covered.

A lot of the NSW journos still didn’t get it. They talked shit about the idea. I remember having conversations with a couple of them about it and they just said, ‘It’s a joke, it won’t work. Teammates from club sides won’t go hard at each other. Beetson and Cronin won’t do that’.

They thought they knew, but they didn’t know at all.

I already had some pent-up anger in me and this verbal diarrhoea I was hearing just increased it. I couldn’t wait for the game to come around and once the whistle blew it became clear to everyone – all the doubters – that it was fair dinkum and if you didn’t aim up, you didn’t belong there.

We knew we belonged there and we were determined to prove it. That’s why we won.

MY FAT GUTS FLASHED AROUND THE WORLD

Everyone’s seen the footage of Origin brawls from that era. It’s not hard to find me in there.

Full-on punching was allowed and as a matter of fact encouraged. No-one gave a stuff, the harder the better. People back then wanted to see blood, they wanted to see violence, and whether the people of today like that or not, that’s the way it was.

We just participated. If you were a shrinking violet, you were found out very quickly. If you couldn’t aim up, you were hunted out of the joint.

One of the most famous Origin brawls was in game two of the 1984 series, at the SCG. It erupted in the first couple of minutes and I went straight for Ray Price. I lost my jersey in all of that and, after I went at it with Price, I ended up toe-to-toe with Peter Tunks.

When it finally ended, I had to pull my jumper back on because my big fat guts were being flashed all around the world.

I made it very clear where I stood with my footy. It was all on the field with me. I didn’t mouth off away from the field, but when we played if I had to stand up for myself, then that’s what I did. I didn’t take a backward step and if it was going to cost me my life I was prepared to give it up.

Origin meant more to Queensland than NSW then and still does now. It all goes back to the floggings we got in those old inter-state series, many times with some Queensland players selected for NSW teams because they were playing in the Sydney comp. The history lessons have been handed down.

We just participated. If you were a shrinking violet, you were found out very quickly. If you couldn’t aim up, you were hunted out of the joint.

You’ve only got to look at this year. Queensland won 11 out of 12 series, then they lost last year’s series and because of that everyone down there thinks NSW is unbeatable this year. They’re almost feeling sorry for us already, but they forget we won the last game last year.

That sort of attitude has been around since Origin began and it helps create the excitement of it, the beauty of it. It’s an inter-state war based on sport.

The violence was toned down gradually over the years to the extent punching was outlawed. Now there’s pushing and shoving, and you’re allowed to hold an opponent’s jumper really tight and pull it this way and that. That must be painful.

Look, seriously, the world has changed and not just rugby league but all sport had to change with it. Whether I like it or not is immaterial, but I recognise it had to happen and it will never again be what it was like back then.

But I will say this: I’d prefer it if you were allowed to defend yourself if an opponent tries to take advantage of you in a tackle or whatever. Some people might have an issue with some things I did, but I have never condoned thuggery or outright bastardry.

If a bloke is trying to take advantage of you, get one over you, then just as you would off the field you should be allowed to defend yourself on it. I’ve always reserved the right to defend myself on any occasion, whether I’m on the field or off it. But the rules have changed and that’s the way it is.

I was never into the sledging side of the game. I got taught very early, at 16, that if you sledge someone you better be able to back it up. I sledged someone and I couldn’t back it up and I never sledged again after that. I found it pointless. If I wanted to make a statement, it was through actions.