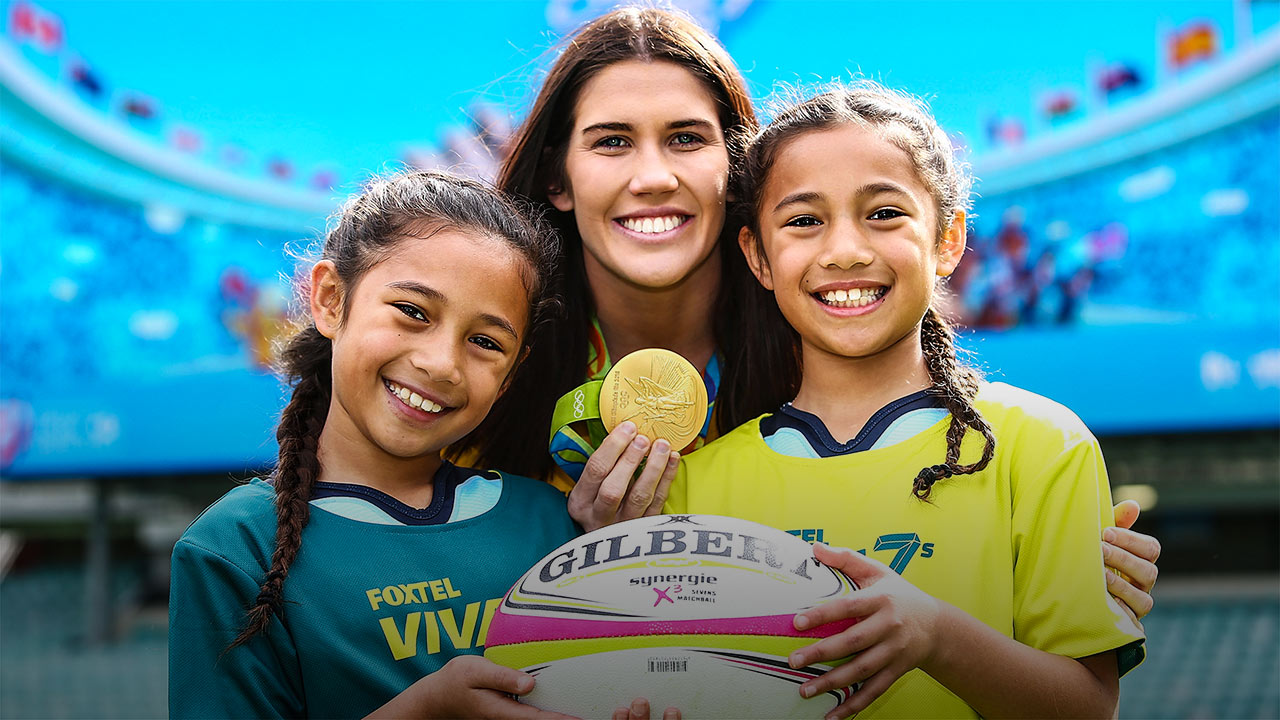 Women playing Sevens get judged on their appearance a lot.

People outside our sport can struggle with the notion that you can be both feminine and tough at the same time. And even within the women’s Sevens ranks, other teams often take one look at us Aussies, make a judgement and think we’re not up to it physically.

Sure, we might be a bit smaller than players on some of the other teams. But we have huge hearts. I think we showed that by winning gold in Rio.

There was a moment during the 2016 Olympics against the USA when I made a try-saving tackle on the sideline. I didn’t think too much of it at the time but the video of that tackle was watched by more than a million people in America and went viral around the world.

Later, our coach Tim Walsh said he thought it was a massive ‘girl power’ moment.

That meant a lot to me.

I had fake tan on my legs, braids and ribbons in my hair. It showed that you don’t have to fit a tired old stereotype of what toughness should look like.

That is defined by your actions, not your appearance.

There are plenty of tiny girls who rip in and become excellent tacklers. Technique can beat pure strength and size. Girls don’t have to change who they are to play our sport.

We’d been trying to change that thinking in women’s rugby for a long time but we weren’t really getting noticed. Then we won the Olympic gold medal and everything changed.

The whole reason I switched from touch football to rugby was to compete at the Olympics. To be a part of that vibe and the Australian team was incredible.

We won gold on day three of the Games which meant we had some time to enjoy that achievement together.

Being in the athlete’s village and going to all the events was great.

People like Patty Mills would sit down and have breakfast with us. His life in the NBA is completely different to ours but we were all part of this one big team. We were all equals.

Patty was a legend. He really enjoyed watching us play. I ended up giving him one of my signed jerseys to pass on to a young girl in his family who had just started playing rugby.

He gave me one of his signed basketball jerseys as well, which was cool.

I got to watch Michael Phelps swim, Usain Bolt run and Rafael Nadal play tennis. That was awesome, seeing how hard all these athletes work to be the best in the world.

We didn’t really take any time off when we returned to Australia because we were trying to do school visits and media appearances – to put ourselves out there as much as possible because in Australia, this is a really new sport for women. We wanted to maintain the momentum and grow the sport.

I had fake tan on my legs, braids and ribbons in my hair. It showed that you don’t have to fit a tired old stereotype of what toughness should look like.

My Dad helps run a rugby club in Brisbane and if I go down to training now, there are almost 60 girls there training. It’s getting bigger and bigger. It’s great seeing kids enjoying themselves. They look up to you and think you’re awesome, so it’s a huge confidence boost as well.

When I was at high school, I never thought being a professional athlete was possible for me. I started studying social work at university in Brisbane before I got the Sevens opportunity.

It’s cool to see the amount of opportunities that young girls have these days. Whether that’s in rugby sevens, netball, AFL, soccer or rugby league. There’s so many avenues they can take to become professional athletes.

We had the inaugural AON Uni7s series this year. I played in the competition for Bond University. Some younger girls from Tasmania told me that the only reason they were playing rugby is because they watched me at the Olympics.

It’s pretty awesome to think that 12 months later we were running around on the same field, playing against each other.

Hopefully one day we can have our own national league. I think the AON comp might have started that off. If it can keep growing I think it could reach that level.

If we can get more people valuing us as an entertainment package, this sport is only going to get better. We’ll be able to start playing more often and in front of big crowds.

We never really expected that any of this would happen. I used to play touch football where I’d have to pay over $1,000 every time I represented Australia.

I played in that touch side with Emilee Cherry, Alicia Quirk and Evania Pelite, who are still my teammates today. We loved it so much that we didn’t even think twice about how tough it was.

I spent my 18th and 21st birthdays with the Sevens team. We’ve been to Russia for a World Cup and Brazil for an Olympics. We’ve experienced all these different cultures together. It wouldn’t have been half as good if I hadn’t done it with these girls, who have become my best friends.

For me, it was tough being away and missing a lot of time with family and friends but there are other girls who’ve made some huge sacrifices.

Gemma Etheridge moved away from her fiancé and left a high-paying job to train with us and reach the 2016 Olympics. To see her get there despite injuring her ACL six months out was incredible. She worked so hard to get back on the field and play in Rio. We were all so proud of her.

The professionalism of the sport could be improved though. I want to play as many tournaments as the men. That’s one way people will start seeing our competition as equal.

Hopefully one day we can have our own national league. I think the AON comp might have started that off. If it can keep growing I think it could reach that level.

Most of us are fully professional now but I think things could get better for the young girls who come into the squad. But in comparison to some other women’s sports, I think we’re doing very well.

Having a more competitive market with the AFLW, W-League, Super Netball and rugby league will only help us.

I think we’ve always led the way. It’s our fourth or fifth season as full-time athletes. When we first started, Sevens was the only professional contact sport for women.

FILLING UP THE PASSPORT

I’m lucky. My boyfriend Lewis Holland plays for the Aussie mens’ Sevens team. We don’t get to do every event together but our schedules usually sync up quite well.

Towards the end of the World Series season you start to get a bit sick of being away from home, though. Dubai, Paris, Sydney, Kitakyushu and Langford – there’s certainly a few stamps on the passport at the end of each year.

There’s nothing that beats Australia and travelling around makes you realise how lucky we are here. In my time off I like to see new beaches and travel around the country. Lewis and I recently spent some time in the Northern Territory on a cattle station.

He was helping some friends of ours with some buffalo catching. The properties are ginormous and there’s so much work that goes into running them. The work ethic of the people up there is incredible.

I’ve got a passion for growing rugby in country areas. One day I want to get out there to help grow the sport in rural communities. I think rugby still has a long way to go in the country. Other sports are doing a better job at the moment.

We were asked what means more to us: the World Cup or the Commonwealth Games.

Almost every girl in the squad said the Comm Games because it will be held in Australia. Not many athletes have the chance to play at that level on home soil and it will be the first time that a women’s rugby Sevens comp will be contested.

It’s also a great opportunity to continue growing the sport in Australia.

I’ve got a passion for growing rugby in country areas. One day I want to get out there to help grow the sport in rural communities. I think rugby still has a long way to go in the country. Other sports are doing a better job at the moment.

The standard of the competition will be really high because most of the top nations in the world are in the Commonwealth. We have a huge rivalry with New Zealand, as well as Canada who is ranked number three.

We’ve got more tournaments than usual in 2018, so it’s going to be interesting to see what each team prioritises.

The World Cup is in America which should really help grow the game on the world stage. I’m excited about the chance to play in San Francisco.

Tim will be coaching us through it all. He’s been there for almost my whole career and watched me grow not just as a player but also as a person.

He has always showed confidence in me, which made me believe in my own ability.

He knows how to get the best out of this group. Dealing with 20 girls, and half of them teenagers, isn’t always easy.  He’s probably had to deal with more than the average coach would. There’s a carry-on every now and then.

We all have our moments!