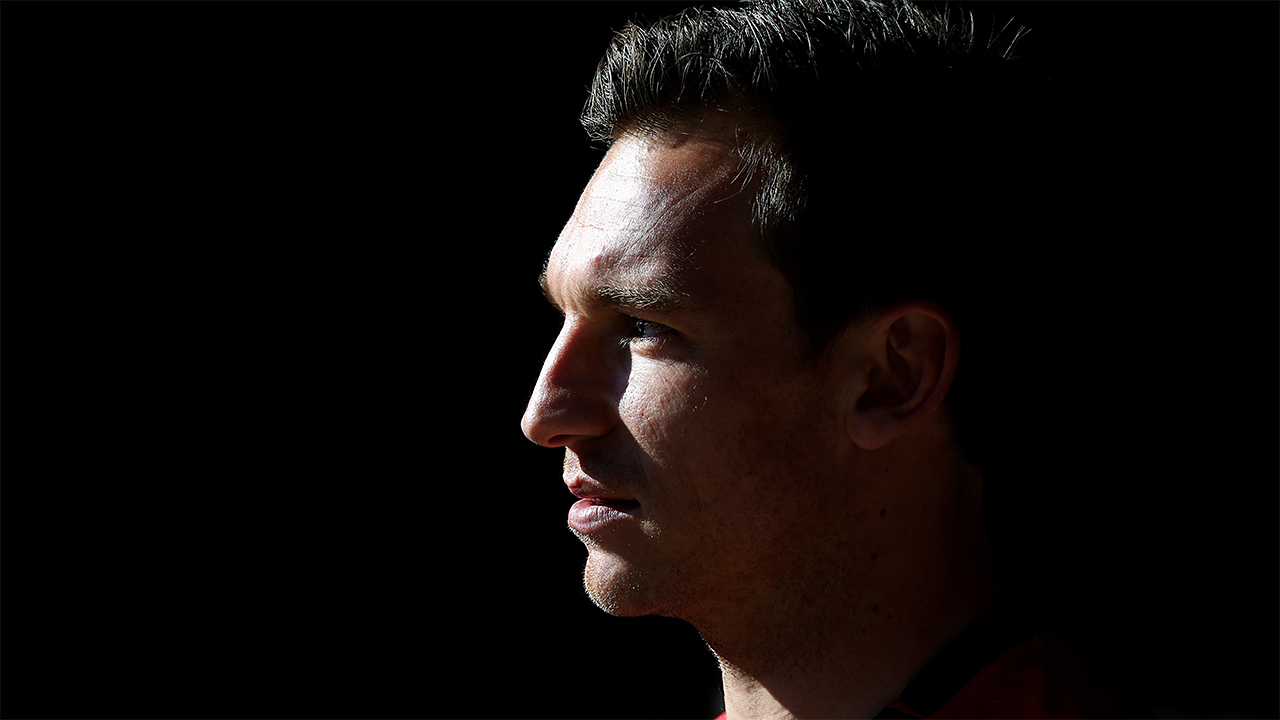 Last season was a frustrating one. The loss to Brisbane is still bothering me.

There was one bright spark, though, and that was defeating Sydney FC.

That means everything to me and the Western Sydney Wanderers.

Sydney FC played some incredible football and broke records last year. They won a record 20 matches and lost just one which made their loss to us even more special. Scoring the only goal in front of our home fans is a moment I will remember forever.

It was an incredible night, the atmosphere was electric. I still remember the noise when the referee blew the whistle for full time. Our Derby drought was over after 1,134 days.

Even as a kid I’d never dreamed of achieving something like that. In 10 or 15 years time, I will still be talking about it and reminiscing about how special that win was.

We set our sights very high at this club and last season simply wasn’t good enough though.

It’s hard to even think about it because we came so close to success. We were a penalty shootout away from reaching a semi-final and potentially turning around a season of missed opportunity.

I’m aware that I’m not very popular with Sydney FC fans. That’s football but I respect all fans because they are the reason why we have the A-League. It’s brilliant to see the stands full.

I’ve developed an ability to put that aside and focus on my performance once the whistle goes. Whenever I go out on the pitch, there’s only one focus: to win.

Playing football is brutal. Your opponent isn’t going to be nice to you and you can’t be nice back. At times it gets heated and emotional. That’s what is beautiful about football – the passion! There are so many things running through players’ minds and the concentration levels are sky high. That goes to another level in the Sydney Derby.

It feels like a Grand Final every time we play each other and I think the fans feel that as well. Everyone who plays on Saturday night will have the opportunity to create a memory that will last forever.

That might sound clichéd, but I’ve created two of my own already – my goal last year and an 87th-minute winner against the Sky Blues in 2014.

They won a record 20 matches and lost just one which made their loss to us even more special. Scoring the only goal in front of our home fans is a moment I will remember forever.

Sydney FC’s captain Alex Brosque has said that his club want to build a dynasty.

This is only our sixth season in the Hyundai A-League and we’ve already tasted success. We aim to be Australia’s most dominant football club sooner rather than later.

When you see how many people come out to watch the Derby and the passion of the fans, it’s the biggest football rivalry in the country.

It will continue to grow and one day we will fill ANZ Stadium.

That will be an incredible spectacle for Australian sport. It’s definitely achievable.

There’s one thing missing from Saturday night’s Sydney Derby. It will be our first without Tony Popovic as head coach.

His departure was a shock to us all. It came just a week before the start of the season. Things happened so quick and I actually found out via Google after a text message from a friend. The news was everywhere.

I was in shock. I couldn’t believe it. Things in football happen very quickly and we had just completed a fantastic preseason so it was quite a shock hearing that Popa was leaving.

There’s a respect for Popa that will always be there because he has an incredible ability to bring the best out of his players and improve each individual. That’s a special skill not too many managers have.

Before Popa left, I received a text from him that said I was a pleasure to coach.

That really meant a lot to me because I’ve looked up to Popa for a long time. I remember watching him play for the first time when I was just 13 at Sydney United’s home ground, Edensor Park.

He was this giant at the back. He looked aggressive and he had fire in his belly. He had a desire to win not just each and every game, but every single ball. That really inspired me.

Things were different back then. The change rooms were right in front of the supporters at Edensor Park so you could wait there and try to chat with players like Popa, Zejlko Kalac, Ante Milicic – footballers that I idolised and looked up to.

I used to look at his face and just be blown away by how focussed he was.

He was this giant at the back. He looked aggressive and he had fire in his belly. He had a desire to win not just each and every game, but every single ball. That really inspired me.

It was the same when he played for the Socceroos. He was a machine.

People will say that Popa wasn’t technically great, but his will to win and ability to read the game was on another level.

There’s no doubt Popa wants to be successful in Europe first and build a reputation but I think he will go on and coach our country one day. It’s something that every coach dreams of.

THE TEAMMATE, THE COACH

I then had the chance to play alongside Popa at Sydney FC, when he first took on a coaching role. I immediately recognised something in him that I’d never seen before in a coach – the same drive and determination he had as a player.

A few years later when Popa was setting things up for the Wanderers, he asked me to join the club before a ball had even been kicked. I was tempted but declined as I was I was under contract in China at the time.

About four or five months later, he offered me another contract – just when they were having that incredible run in their first season. I refused the deal again as I was doing very well at the time – in fact I scored a hat-trick a few hours before Popa called.

When Tony came back to me a third time I couldn’t say no. Saying no to Popa a third time is just something I couldn’t do. It would have been a huge mistake, especially after seeing what they had achieved in year one.

It’s incredible how football works. Had he not called me I don’t know where I’d be today. In one way, he rescued my career.

Ono, La Rocca, Polenz, Hersi, Covic, Bridge, Topor-Stanley – the list of quality players goes on. It was quite amazing to join a squad like that.

It wasn’t easy coming into that team. The first memory I have of Popa at the Wanderers was him laughing at me.

I’d heard that they trained very hard and on my first day I struggled to keep up with the group on a warm-up lap. I was out the back of the group and looked over at Popa and Ante Milicic to see them cracking up.

Looking up and seeing the coaches laughing at me was embarrassing and I found out very early on in my life at the Wanderers that I had a lot of hard work ahead of me to catch up to a phenomenal group of players.’

I often think about that moment and how far I’ve come at the Wanderers. With Popa’s help, I’ve grown every single day and become a better player. Looking back, it’s incredible what you can achieve with belief and hard work.

After we won the Asian Champions League we should have celebrated for 12 months.

Popa quickly tried to shift our focus back to the A-League. It was incredibly difficult after winning such a prestigious competition at our first attempt. There was no time to enjoy the moment and we struggled for some months after our special win.

Popa said to us: ‘It’s done. It’s an incredible achievement and a credit to the players and staff but we need to move on and look for more success.’

Tony started with a blank piece of paper and built a football club. He created our identity and values. There are photos of him all around the club which are a reminder of everything he has done and achieved.

It’s unfortunate that the players didn’t get a chance to properly farewell him. I hope one day we can all get together and reminisce about some of the incredible moments we shared.

With Popa’s help, I’ve grown every single day and become a better player. Looking back, it’s incredible what you can achieve with belief and hard work.

Should we go on to win trophies this season, it would be another memorable story with a foundation built by Popa. This is his squad and he gave us the best pre-season we’ve ever had. He built a team that is a genuine contender for the title.

Before he left, I wished him all the best in Turkey and thanked him for everything that he had done for me. I’ll be following his career – it was incredible to see him get a win in his first match and I was extremely happy for him.

MY ROLE THIS SEASON

I’m one of the oldest players in the group now and one of the longest-serving players at the club. Whether I play 90 minutes, two minutes or I’m in the stands, my mentality doesn’t change. I have to be a leader.

You can’t buy experience and the young guys need leadership. Even though I don’t have the captain’s armband I have a lot of responsibility.

On the field, scoring goals is something I’m obsessed with. I want to score on Saturday night. I want another great Derby memory.

I’ve still got plenty to give as a player. My body has never felt better and I’m very happy with how things are going. Retirement is not in my plans just yet.

I look at Tim Cahill and what he did for the Socceroos against Syria. He’s an inspiration. If he can do that at 37, then I know at 35 I’ve still got a lot of quality football left in me.