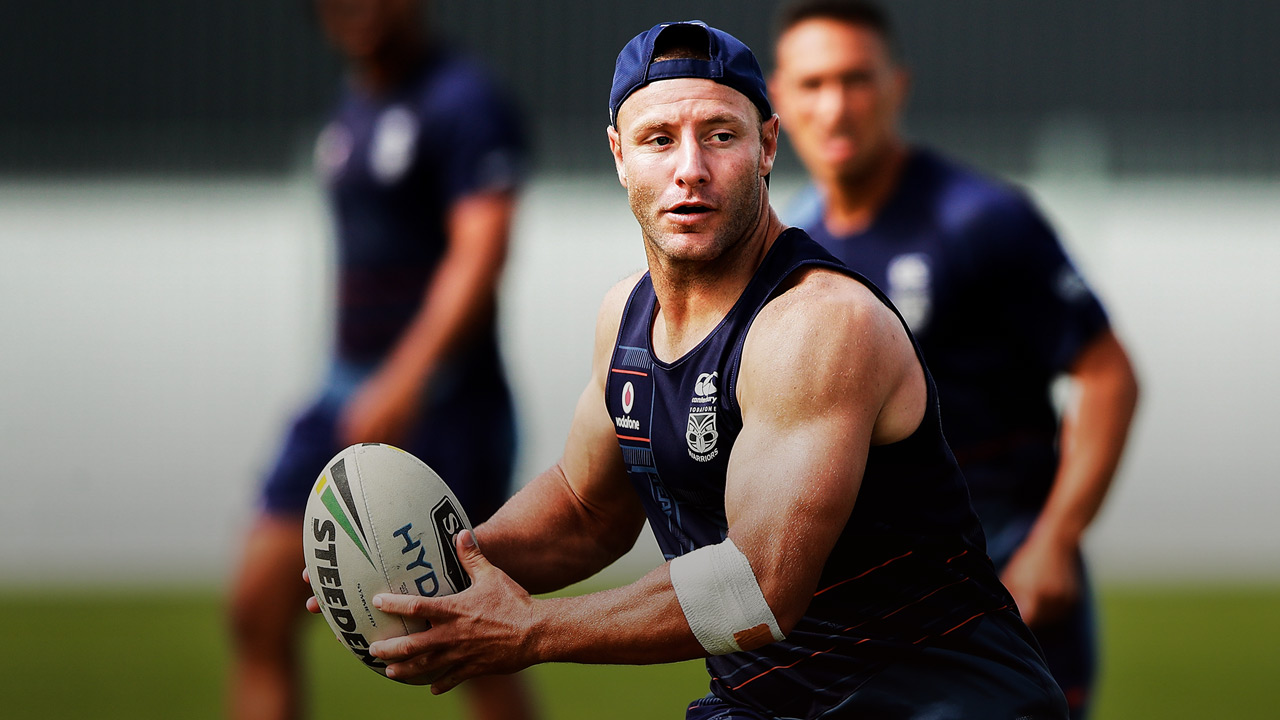 The new fight in the Warriors

The new fight in the Warriors

I have seen plenty of jumper presentations in my time. They usually follow a similar pattern from club-to-club. But not at the Warriors. Not even close.

I was standing there, as usual. All the players and coaching staff were gathered, as usual. And then a four-year-old boy marched into the room holding my new No. 6 jumper.

‘I love you Dad, and I hope you win the footy. Go Warriors!’

It was my son, Boston.

The club had arranged it with my wife, Sarah, and the kids, Boston and Sadie, and kept it a secret from me. It was a total surprise and a lovely one at that. It was a very special moment and something I’ll cherish forever.

To me, it really summed up the experience with the Warriors so far. They have done everything to ensure we made a seamless transition from the northern beaches of Sydney to downtown Auckland. They’ve been thoughtful, considerate and incredibly accommodating.

They even presented Boston with his own little Warriors jumper. He won’t take the thing off!

Boston is at pre-school and has already mastered his own version of the haka. He is getting right into the culture, learning the names of all the primary colours in Maori. Before long, I think he’ll be counting to ten in the native New Zealand tongue. He has made new friends and the change in culture will be really good for him.

The Warriors have been a real eye-opener on the field as well.

There’s been a perception that the players aren’t fit enough, don’t train hard enough, and that’s why they haven’t been successful over the last five or six seasons.

I can’t speak for years gone by but I can say, with great certainty, that it isn’t accurate in 2018.

This has been one of the toughest pre-seasons I’ve had – and I played under Craig Bellamy. We have got through a ton of work. Fitness, strength and stamina are not going to be issues for the Warriors this season. I’ve been genuinely impressed. Everything looks in place.

I’m not going to make any big predictions but I can guarantee the players will be making each other more accountable. That’s something we focused on during the pre-season: being accountable for your actions, giving your best effort on every occasion.

I played in the trial against the Titans on the Sunny Coast. It was my first time playing alongside Shaun Johnson, Roger Tuivasa-Sheck and the group. Our spine worked. Things flowed quite easily on the field.

There’s been a perception that the players aren’t fit enough, don’t train hard enough, and that’s why they haven’t been successful.

Working alongside Shaun is going to be exciting. He can do things on the field not many players can. He’s a bit of a freestyler, so good off-the-cuff. If you jump out of the line and rush him defensively he will, more often than not, come up with a big play instinctively.

If I can take some responsibility off him – let him play eyes-up, run the footy and have some fun – he will be very dangerous. From the outside looking in, he has had a lot of weight on his shoulders, steering the team around, trying to control the game and come up with the big play.

I just want him to know that he’s not on his own. I’m here to support him and take care of the game management stuff. That will allow him to play footy, use his speed and run the ball.

He’s had an interrupted pre-season – he underwent eye surgery to remove a benign growth and had a delayed return because of World Cup leave. But you wouldn’t have known it against the Titans. He had some nice touches and played 70 minutes. It was really encouraging.

We’ve been spending quite a bit of time together. I enjoy his company. We’ve had more coffees in the last couple of weeks than he has had in his entire life! That’s the thing I like doing.

A TEAM OF LEADERS

One of the main reasons the Warriors signed me was to add more experience, to bolster our leadership group.

Simon Mannering has been at the club his whole life. He’s a fabulous role model for the young kids. He typifies what we’re trying to stand for as a club and the culture we are trying to foster.

Simon is a real knockabout person, not flashy in what he wears or what he drives. He has played nearly 300 games for the Warriors, plus a lot of Test football for his country, and yet he doesn’t put himself on a pedestal, doesn’t see himself as better than anyone else. He’s still quite shy and humble about his standing in the game. He is someone to aspire to.

Shortly after I arrived in New Zealand, we both took our young boys to the basketball. They’re both of a similar age and ran amok a little bit. It was all part of Simon and the club accepting me and my family as their own. It was a great gesture.

Adam Blair has been a big addition to the club, as have Tohu Harris and Peta Hiku. These are guys with plenty of experience. I’ve been working closely with them to get ideas and feedback on how everything is going.

I knew Tohu when we were both at the Storm. The boys nicknamed him The Zombie because he was so laid-back, almost sleepy, most of the time. To us, he never looked as though he was tuned in but he was just a young bloke quietly taking everything in. He’s actually a really intelligent footy player.

One of the first things I noticed when I arrived at the club was that Tohu has a big voice now. He is actively educating younger members of the team and passing on his knowledge. The Zombie has woken up!

Mooks – that’s Steve Kearney’s nickname – gives it to him all the time. He was also with us at the Storm. He said to Tohu the other day, ‘When you were a kid at Melbourne you wouldn’t say a word to anyone. Now I can’t shut you up!’.

Tohu is going to be a huge asset to the club. He is the just the type of player we needed.

Issac Luke might been in the crosshairs of some critics but he’s really impressed me since I’ve arrived at the club. He had a limited pre-season because of hamstring issues. He had a few weeks off, got it all sorted and came back into the fold a couple of weeks before our first trial.

Since that happened, he has cleaned up our ruck a lot. He’s sharp out of dummy half. You can see he has looked after his body. He’s really lean. Obviously, the better he plays the better the team goes and I think he has done everything he can to be set for a big season.

We’ve got the right pieces in place to be successful. We have come up with a style of footy we think is going to suit us. We’ll find out in the first couple of weeks how it’s going to work.

Mooks has been terrific. He’s calm but direct in what he wants. And he has an extra pair of eyes in Brian Smith, our new general manager. Smithy has loads of experience as an NRL and Super League coach. He’s seen it all as a player and coach and his aim is to put some great structures in place.

The Warriors need these pathways for our players of tomorrow. In the Auckland competition, we didn’t have an under 18s side last year.

There’s a bit of a concern that rugby union has taken over in the region. I guess it’s Smithy’s job to get all the foundations in place to set up pathways for the young kids to follow.

The circumstances of why I left Manly were pretty straightforward.

I received an approach in November from the Warriors. I was off contract at the time and spoke to the Sea Eagles management about the situation.

A decision was made. I wasn’t offered a long-term deal to stay. That’s part and parcel of the game and I accept that. I would have loved to have stayed, but I had to do the best thing for my wife, the kids and me.

I really enjoyed my time at Brooky. I have no hard feelings. I was well received by the people there and we loved living on the beaches.

I made a lot of great friends at Manly. I caught up with a few of the boys for lunch before we flew over to New Zealand. And then when I came back to Australia towards the end of December, my family went over to Daly’s house and stayed there. The kids had a great old play for Christmas.

We also caught up with the Trbojevic boys at their family home up at Mona Vale. We all had a swim in their pool on a great summer’s day. The boys parents, John and Melissa, were great to my family when I joined Manly from Melbourne. They invited me, Sarah and the kids over every couple of weeks for some home-cooked meals.

I still keep in touch with heaps of the Manly boys. There are plenty of phone chats between us on a weekly basis. In rugby league, you make friends for life.

But you also move on to greener pastures, different locations, different teams. The Warriors offered me the deal I was looking for – three years – and I was happy to take it.