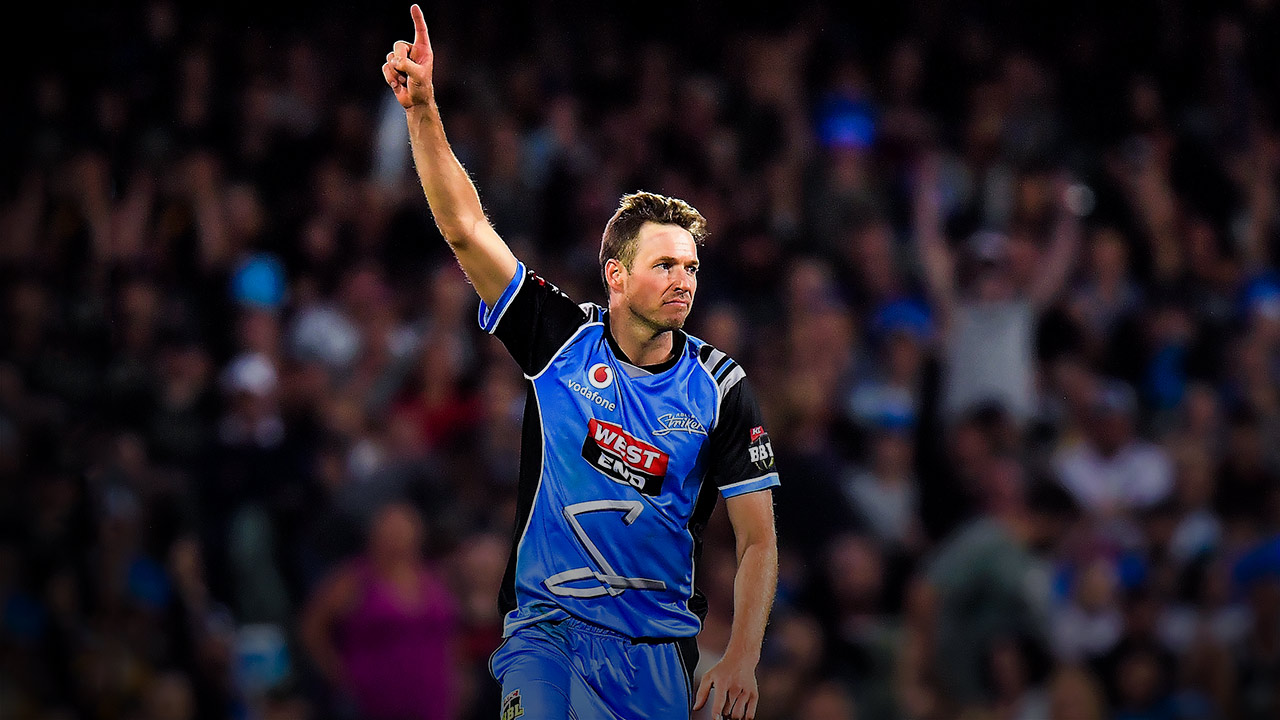 The story behind that catch

The story behind that catch

It didn’t feel like the greatest catch. I was chatting to the boys after the game and they said, ‘Yeah, it was pretty good actually.’ But at the time, it really didn’t feel like it was one of the great diving catches. I’ve probably watched it a dozen times now because it keeps popping up in my Twitter feed. I might have to watch the replay a few more times.

I know that Dwayne Bravo likes to hit inside-out over cover. That shot is pretty common with Brav. I’ve played with him in the IPL so I knew that was a strength of his. At first, I didn’t think he got anywhere near enough of it. I thought it was going to land a long way short, but it just kind of kept going, and that’s when panic set in.

I played a little bit of AFL when I was young, but not very well. I was a tiny kid so taking hangers was not in my repertoire. But these days I’m not bad above my head. I always rate my catching above my head, so it was nice to hang on to this one.

When I landed I just hoped I wasn’t going to stand on the rope. Then I realised that I had another step. At that point you’d normally try to throw it to yourself, or just save the six and drop it on the ground. But I was going that fast that I knew wouldn’t be able to, so I thought if I throw it towards Jakey Weatherald, he might be able to save an extra run.

I couldn’t really see Jakey properly, but as I let it go, I reckon I saw him in the corner of my eye and I thought, ‘Oh I’m a chance here, it might actually get to him and he might even be able to catch it.’ Then it was panic stations that I’d thrown it too straight and that he wouldn’t be able to get to it. But he put a bit of mayo on his dive and it was good. We use the word mayo to mean a bit extra, like adding a bit of mayo to the sandwich, a bit of gloss on top.

His celebration had a bit of mayo on it too.

I’ve since heard the catch compared to the classic 1981 John Dyson catch but it’s hard to compare different eras. That sort of catch was absolutely unheard of back then, but it’s nice to be talked about with it. One nice thing is I took a good catch last year and Mark Waugh was commentating and he wasn’t very excited. It takes a pretty special effort to get Mark Waugh excited about a catch. So it was nice to have Howie talking me up last night with Flem next to him.

It was also nice after the game when Bravo said, ‘Good catch,’ and gave me a bit of a sly wink when we were shaking hands.

I don’t mind that the catch goes down in the score book as caught Weatherald. But I’ll be a bit annoyed if I have to type in Jake Weatherald Catch to find it on YouTube in years to come. Hopefully I get tagged and can search my own name on that one.

My dad Trevor played three Tests and six one-dayers for Australia around the World Series time in 1978. I was born in Melbourne and when dad retired, we moved to Brisbane. I think he thought the standard was a bit lacking in Brisbane so, at about 42, he decided to keep playing. He played two more years, and he actually won the first grade batting and bowling awards at 43 years of age. At the time I thought it was nothing, but now that I’m 35, I can see it was a serious effort.

I never really got pushed into cricket, though. I think I was 13 when I said to dad, ‘Can you take me down to the cricket club so I can play for a team?’ Mum tells the story that dad walked into the kitchen where she was, and fist-pumped and said, ‘I haven’t pushed him towards cricket but he’s finally come back to it!’ It was a nice lesson in parenting.

I was an average cricketer as a kid. I batted three and kept wicket in my first XI in grade 11, but I was a stinky keeper and as a batsman I couldn’t hit ’em off the square. I don’t know why I was in the team to be honest.

Then I started bowling a bit after that and played some grade cricket. I think I played first grade at maybe 19, but then had stress fractures for maybe three years in a row, and pretty much gave up cricket for a year.

I took a good catch last year and Mark Waugh was commentating and he wasn’t very excited. It was nice to have Howie talking me up last night with Flem next to him.

At maybe 20 or 21, I decided I’d play third grade as a batter and bowl some off-spin. Within a couple of years I was playing first grade as an off-spinner, and then someone got injured so I bowled seamers and some offspin. And then the seam just took over.

My slower ball now that you see in the BBL is pretty much what my off-spinner used to be. I would have bowled thousand of those balls in grade cricket, so it’s just a natural thing now, it’s pretty comfortable. Most guys aren’t that fortunate to work on it. A lot of young fast bowlers on rookie contracts might bowl three slower balls in a net session. That’s a lot of net sessions to get the slower ball down pat if you’re only bowling three a session, whereas I had two seasons of full-on off-spin which progressed my learning quickly.

I left high school in grade 11. I wasn’t a bad student but I just didn’t really enjoy school, so I got my carpentry apprenticeship and smashed that out in a few years and kept working as a carpenter.

I bought a house when I was 23. My first cricket contract didn’t cover the mortgage payments, so I’d go to work before training, then do my gym and running and then I’d have to go back to work in the afternoon to top up my salary. It was an interesting time. It was hard, a few sacrifices and things, but it was very enjoyable.

I think carpentry was good for my overall fitness and strength because you’re doing normal everyday lifting, not gym stuff. It was also good for my mind. I would lie in bed at night thinking about timber orders and client questions instead of worrying about nicking blokes off and hitting the top of off stump, and, ‘Why did I drop that catch?’

It was nice to have your brain on things other than cricket, and that’s part of the reason why I think I’ve worked every off season. I’ve been on contract ten years and I’ve worked every winter building or whatever for probably three months minimum. I like to keep busy and keep working.

The aim for the Strikers now is hopefully to knock off the Scorchers in their last game at their home ground on January 25. It’ll be a battle for top spot and we’ll hopefully have a couple of finals back in Adelaide with a massive crowd which would be awesome.

The last two times we’ve played home semis, we got pumped. The Sixers took us down in 2015 when Nic Maddinson turned one on, and the year after, Khawaja was batting like Don Bradman and the Thunder took us down. It’d be nice to win one at home.

It was nice to have your brain on things other than cricket, and that’s part of the reason why I think I’ve worked every off season.

After the BBL, I’m in the IPL raffle like everyone is, so we’ll see what happens. I was fortunate enough to get picked up last year and do a back-up bench player role at Hyderabad. I’d love to get another opportunity to go over and hopefully squeeze another game in.

I’m not a top-shelf player. I think I’ve played maybe two of 32 games when I’ve been in India, so there’s been a lot of watching from the sidelines. There’s some serious talent in those teams. You’ve just got to bide your time and hopefully get a game, that’s the way it works.

Good luck to the @ndcaknights today!!!! Olly is very excited!!!

I’m 35 now but I don’t like to think of being in the twilight of my career. Age is a number. I’m moving better than most blokes in my team, so I think I can hang on a for a few more years yet.

I’ve got a one-and-a-half-year-old son called Oliver. Not that it’s made cricket less special, but now that I’m a father, it’s a very interesting and exciting thing to have something that ranks so much higher than cricket in your life.

Before our recent game against the Hurricanes, I was more excited about flying home the following day for the first time in a couple of weeks to see my little fella. Not that I was not excited about playing the game, but it’s cool that’s something’s more special in your life than sport. And Ollie couldn’t care if I play well or take a good catch.