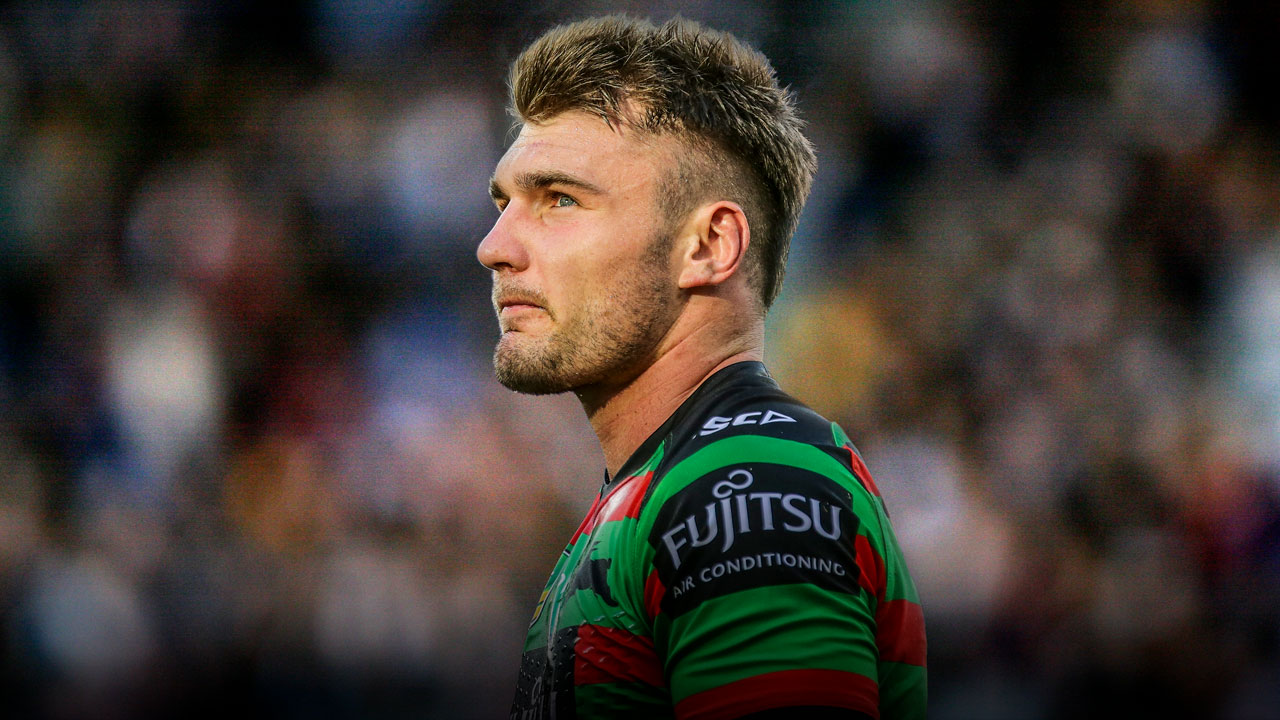 There were two voices telling me to play on: my own and my coach’s at the time.

If I had the confidence that I have now and didn’t listen to them I would still have my finger.

It’s quite strange making the decision to amputate at the age of 21. As a kid, you’re aware that playing footy brings with it an inherent risk of injury. But chopping part of you off? It’s not something you really consider.

I signed with Souths straight out of high school and there was a bit of media about it because I had been playing rugby union. I trained hard that pre-season and headed into the trials. I hurt the finger in one of the first trials. I didn’t think much of it at the time. Just a bruise, a bit of swelling.

But it got worse. From round two of that season, I was needling it with a local anaesthetic before every game. This is where I should’ve stopped.

I should’ve had it fixed, put it in a cast and allowed it time to heal. I would’ve been out for four weeks. That’s nothing in the grand scheme of things.

I didn’t. I wanted to make a good first impression with the club. I didn’t want anyone thinking I was a wuss. I also had a coach pushing me to keep playing. So I stuck it out.

In hindsight, it was stupid. It’s one of those moments where you wish you could go back in time and tell your younger self the consequences of your actions at the time.

The long and short of it was that I ended up undergoing seven surgeries on the finger in the space of three years. One was to repair the tendon, but once that had healed, all the cartilage was dead. It was just bone-on-bone. Then they tried to fuse it: first with pins and then screws. Nothing took.

The finger would stick out. I couldn’t make a fist. I would have it operated on and then I would bump it on a chair, or on the indicator in my car when I was turning the steering wheel, or making a tackle. It would go again and I was back to square one.

I fractured it again against Penrith last season and ended up playing the rest of the year with it. At the end of the 2017 season, I went under for yet another fusion; recovery was smooth, but I knocked it again in our first skills session of the pre-season.

It was at this point that the surgeon laid my two options out on the table. I could try a joint replacement – that’s a six-month recovery period and, even then, there was no guarantee it would work, less chance of healing than the four fusions previously broken. Or I could amputate.

That’s when I looked to our physio and said, ‘I’ve got to take it off.’

Our football manager, Mark Ellison, put me in touch with David Gillespie. ‘Cement’ had a finger amputated during his career and went on to win a premiership and represent NSW and the Kangaroos.

He didn’t hesitate. ‘You won’t know yourself,’ he told me. ‘Once it’s off, it doesn’t make that much of a difference.’

It was the reassurance I needed to hear.

The period around the surgery was difficult, but not just because of the finger. It was announced that I was moving from the club for 2019.

It was a hectic few days. There was a bit of headnoise and a lot of backlash. You expect that when you sign at a different club. But it hits you a bit harder after an operation.

Speak to any athlete and they’ll tell you post-surgery is when they are at their most vulnerable. You’re groggy, you’re weak and you feel pretty bashed up. To be experiencing the signing backlash at the same time I’d had a finger removed was tough.

Driving through these types of challenges early in my career has made me into the person I am today. Each experience makes me more resilient than I otherwise would’ve been. It has definitely allowed me to appreciate what I do.

In hindsight, it was stupid. It’s one of those moments where you wish you could go back in time and tell your younger self the consequences of your actions at the time.

You’ve also got to have a laugh about these things.

Shortly after I had it off, I was having breakfast with the boys, a bacon and egg wrap for me. I went to lick sauce off my fingers one-by-one and the third one wasn’t there. I licked fresh air. The boys saw me do it and cracked up.

It’s good for pranks, too. The other day we were out having breakfast again and two of the boys ordered the same thing I was going to. I said to the waitress, ‘Make that three,’ and held up two-and-a-half fingers. The look on her face was priceless.

Some of my teammates’ kids don’t know what to make of it. Jason Clark reckons his daughters mention it at least once a week and have even drawn pictures of me with my ‘sore finger, as she calls it.

In the end, losing the finger was a small price to pay to be able to do what I love every day. Others in rugby league have it much tougher. My mate Connor Tracey has just come back from three knee reconstructions – he didn’t play a game of football in two years – and nothing much has been said about it in the public. There are plenty of stories no one hears about.

And Cement was right. Playing without pain has taken a lot of stress away. It took a little while to re-acclimatise to catching and passing but, now that I’ve done that, it’s back to normal.

Nice hit out in Mudgee yesterday, round 1 couldn't come quicker

I had an interrupted pre-season and the finger ended up being only a small part of that.

Pancreatitis put me out for a few weeks. An Achilles injury sidelined me for a month. It was a frustrating few months and it resulted in me coming into the season underdone, or at least not where I’d like to be yet.

I tried to do a skills session a week or two after the amputation. I had been doing fitness on the side of the field on my own. It gets pretty lonely. I rushed myself back in.

That wasn’t a great idea. I was nowhere near ready. Catching the ball was really painful. When I took the strapping off, the stump was bleeding all over the place.

I waited two more weeks and ramped it up from there. The nerves and sensitivity have chilled out a bit now. It’s not as painful as it was.

The Achilles was a strange one. I saw a specialist and he said he wanted to operate. That would’ve put me out for eight weeks. He advised that we delay the surgery for ten days to allow the cortisone to wear off. This was a few days before the Charity Shield.

I said to our physio, ‘I may as well play against the Dragons and see how it feels.’ I ran on it that week, played in the Charity Shield and pulled up fine. It’s been under control since then. The physio can’t explain it.

I wasn’t particularly happy with my performances in the first two weeks of the season. Round three was a step in the right direction, but I still have a lot to work on. My conditioning is coming back.

Another challenge this season has been that people know my style of play better and I’m more marked. Before, I had the advantage of being unknown. People didn’t know who I was or how I played. I flew under the radar a bit last year.

I love the challenge of stepping up my game.

PUTTING PROPS ON THEIR ARSE

This is my last year at the Rabbitohs and I want to win the comp for them. This is no secret. I love the place. Some of my best mates are here. I don’t want to let them down.

The way he has broken through this season is testament to the hard work he puts in. He’s pretty impressive for someone only turning 20 this year. I reckon he’s going to be a big name in rugby league for a long time.

I love the way he sits those big 120kgs props on their arse. He’s only about 93 kilos, or something like that, but he gets right underneath them. It’s no fluke. He does it at training and in games all the time. There’s no luck involved.

Neither of us are the biggest forwards running around in the NRL. We can learn a lot from each other. I know I certainly take a lot from his approach to the game and try to apply it to mine.

Anthony Seibold has been brilliant, too. He has obviously had a lot of success in the Melbourne Storm system and with the Queensland Origin team.

There isn’t a ‘change for change sake’ mentality. He has built on our strengths. He’s kept the things that were working and developed the things that needed improvement. With this being said, he has brought a lot to the squad and the changes that he has implemented have all been very positive. The players have enjoyed the process.

They say competitions aren’t won in March, but that’s precisely the time when combinations are built. They’ve started to click. Hopefully, in the next few weeks they’ll start firing.