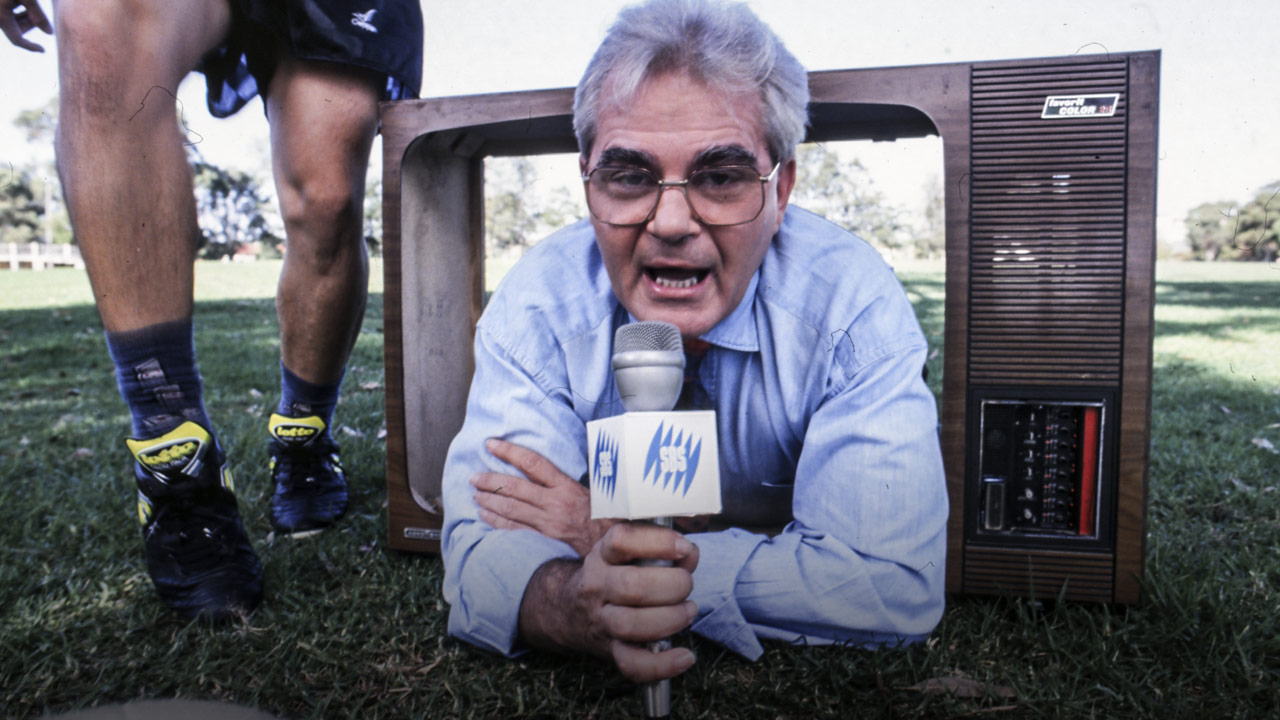 Pondering a World Cup without Les

Pondering a World Cup without Les

This World Cup will be shrouded in strange. So much strange.

Strange as the last tournament as a premium, tooth-and-nail fight to qualify for 31 teams, as FIFA President Sideshow Bob (minus the hair) leads us to a 48-team pageant. Strange as we await the VAR grim reaper, armed with its sickle, lurking in the shadows, waiting to hack into the soul of football. Strange that, in the end, after all the huffing and puffing about FIFA’s corruption and the circus that was the doling-out process in Switzerland in 2010, here we are, in Russia, ready to walk into Putin’s playground.

So strange, still, that as Socceroos fans we are doing all this without Ange as coach.

Stranger still that after cleaving to SBS and its blanket coverage of the tournament since whenever, taxpayers are having to double-dip if they want to watch the whole tournament this time, for having paid once for SBS to secure the rights they will have to pay again to stream the tournament’s entirety, to watch Lionel Messi in the group stage. The way of the world, maybe.

I can’t imagine SBS doyen Les Murray would be comfortable with this, though, were he still to be with us.

And that’s the biggest strange of all: a World Cup with no Les ‘the 21st World Championship of Football’ Murray.

‘THE BIGGEST PARTY ANIMAL OF THEM ALL’

According to any measure, SBS’s delivery of the FIFA World Cup finals has granted enormous exposure for the game in Australia.

Hamstrung, for the most part, by penitential telecast times, although truth is this helped secure SBS’s tenure, given that other networks cowered at the prospect of a month-long 64-game carnival coming into lounge rooms at insomniac o’clock.

Nevertheless, SBS brought the magnificence of this global showpiece and football grew as a result. Australians’ hunger to be there also grew as sports fans increasingly understood what we were missing out on. Generations of backpackers who had flown the coop without a soccer experience in their bones couldn’t help but get slammed in the face by wogball once they had touched down in Europe or South America.

SBS channelled these newfound fashionistas. SBS provided fertiliser. The World Cup shone a light to the masses and SBS held the invite to the party. In the middle of it all, welcoming folk into the bosom of the world game, was the biggest party animal of them all, Les Murray.

That’s the biggest strange of all: a World Cup with no Les ‘the 21st World Championship of Football’ Murray.

Les was the champion of the migrant and the refugee, it’s true. But the World Cup enabled him to connect with a broader spectrum of Australian sports fan, who’d tune in quadrennially.

Dinki-dis grew comfortable in placing their month in the velvet hands and velvet voice of Les as this tournament, more and better than anything else SBS could do, would ‘bring the world back home’.

Australians loved it because, despite our sporting predilections, we aren’t isolationists. Aussies love travelling and, when they are on the road, love others to know that Aussies are travelling.

Our geographic isolation, island mentality, feeds this. Football challenges the notion, confronts the reality. I think, for World Cup month at least, Aussies liked being poked and prodded about this.

And gradually the army grew. Like the millennials who’ve never experienced economic recession, four consecutive finals’ appearances will develop a sense of inevitability of Australia’s participation at the World Cup Finals. It wasn’t long ago that what is about to be in Russia was but a faintly flickering candle of hope and possibility for football and sports fans in Australia.

Somehow, remarkably, all the while the chord remained strong and the connection was growing all the time.

THE PUZZLE, THE PLATFORM

My first professional experience with the World Cup was France 98.

I remember the phone call from Les at Easter time that year, wondering what I was doing in June/July. ‘Washing my hair I think,’ was my response.

Never did I imagine, or had I ever dreamt, of being invited to do something like this.

For days after, I couldn’t really talk. I’d spent many hours in privileged confines sitting at the feet of Les and Johnny Warren, in and around SBS football broadcasts, as cataclysmic a cultural experience as can be for a bloke from the white-bread homogeneity of Sydney’s north shore.

Les Murray, on the set of the live coverage of the World Cup in France in 1998 with Tracey Holmes and Andy Harper. #JWF ⚽??

Posted by Johnny Warren Community on Sunday, 13 May 2018

Imre was my first interaction with unbridled football passion. Imre, always immaculately attired, used to bellow ‘sentimental’ in his very refined yet thick accent from the sidelines as we played as eight- and nine-year-olds. I always thought such descriptions a bit over the top. ‘How can soccer be sentimental?’

Imre used to invoke the spirit of his hero, Ferenc Puskas, to us as kids. I loved Imre then, but didn’t understand him. He literally seemed to be from another planet. I didn’t understand football’s place for him. But with Les, post-facto, the Imre puzzle took shape for me and it’s been a deeply profound process.

Les had that ability, through football, to put pieces of the puzzle together, for other people. SBS provided him the platform, the World Cup the medium.

Unflappable, indefatigable, measured. That was his on-air persona. Ecumenical and averse to stereotyping was his mantra; although there existed a strange paradox of Anglophilia that mixed with Euro-snobbery. I never quite got to the bottom of that one, treating it as a snake charmer might his cobra.

That puzzle remains, for me, in pieces.

He enjoyed a laugh, had a great sense of humour, was fun to be around and a tremendous conversationalist. Whatever his agenda or opinion, he was, over coffee, open for business.

You were always permitted to give him your best shot, within reason he’d listen to anything. But he’d always have some way of exhaling his cigarette smoke and bringing things back to manageable, before a conversation might go off a cliff.

He loved the fact that football spoke every dialect. He pompously thought he could also speak every dialect as a result.

Prior to France 98, he, Johnny, Tracey Holmes and I were driving to Brazil’s last open training session before the tournament was to start. We’d just left SBS HQ in Paris, and Les had just delivered his State of the Union to the staff, about what the World Cup is and how SBS regards it and about professional standards and time-keeping and sensitivity to viewers blah blah blah.

We were cutting it fine to make training on time, in immediate contravention to Les’ exhortation to his workers. Thankfully it was Brazil, who ended up being late to their own training session.

That ultimately gave us a bit more time, not that we knew we had it at the time.

It was terrifying. Johnny sat in the front and were he not fumeur his fingernails would I’m sure still be deeply embedded in the dashboard. Tracey and I sat in the back seat, unsure whether to laugh, cry or ask for the last rites.

We hurtled down the motorway, pre-GPS of course. Magoo was following his nose. He was in a bubble. With only a vague idea of where we were going but doing it at a very great speed, Les decided he needed to recalibrate.

What followed once we’d left the motorway was a series of Les slowing-up next to suburban Parisians asking directions in his Aussie-Danubian-English-French. He would ask his question and nod, knowingly, at the local’s information and directions, all in French.

He loved the fact that football spoke every dialect. He pompously thought he could also speak every dialect as a result.

And this is the magic of Les. I spoke no French, literally apart from my year-eight ‘une tart aux cerises s’il vous plait’ (a cherry tart please), which was not overly useful at this point. It remains truly amazing what one’s mind will dish up at times like this.

But, now that the driving was done, we had total trust that Les knew what he was doing, and saying. Well, Tracey and I did. We’d watched him on television, talking with the people of the world on their terms, in their language, football.

It was only a small hop from lingua football to French, wasn’t it? It soothed us although, in hindsight, Johnny had obviously been in that situation many times before.

This World Cup will be great. All World Cups are great, I think.

If the Socceroos go well, it will be sensational. But, it will be strange. Reduced SBS points to the disruption in our contemporary environment.

But no Les? That’s going to be just pure strange.