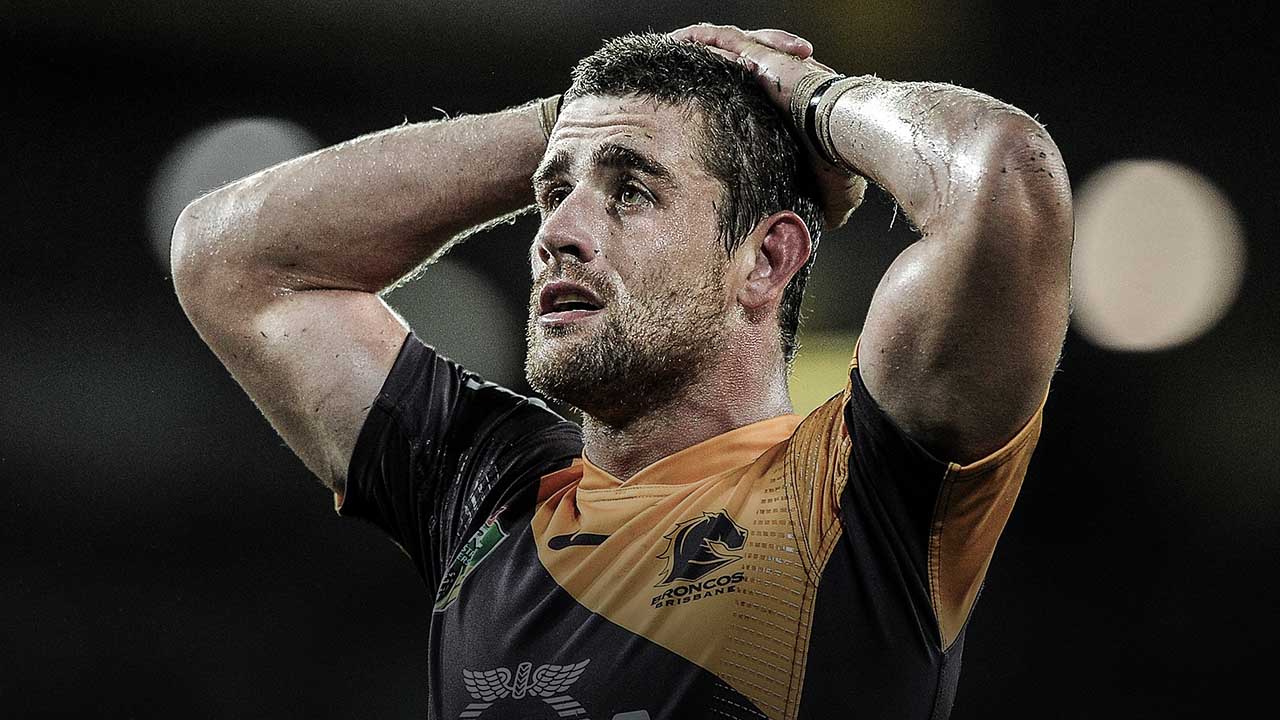 My diary of pain & hope

My diary of pain & hope

I had never kept a diary before. It wasn’t really my go. Since I made the move from Dalby in the Darling Downs to Brisbane, I’ve been happy to live in the moment, set goals for the future and not spend too much time dwelling on the past.

All that changed a few months ago. The need to write a diary was overwhelming. Part of it was to give me a place to vent – about frustrations and pain and tiny, little wins – without bothering everyone around me. And the other was to keep an historical record of the journey I’m on; a journey every footy player dreads.

THE ACCIDENT, THE PAIN & THE BAD NEWS

For most people who watch rugby league, or any sport for that matter, the scenario goes like this: you watch a player hobble off the ground with a serious injury and then, however many months later, you see them sprint back out on the field again. They don’t see what happens in between.

It was Round 21 and we were playing the Eels at ANZ Stadium. With ten minutes to go, Michael Jennings made a dash out of dummy half and put through a grubber near our line. Adam Blair and I were on either side of Jennings and closed in. We ended up colliding. Adam took out my knee. The pain was sharp and immediate.

It was just bad timing. A freak accident that my leg would get caught where it did. I’ve been in plenty of tackles like that before where I’ve just gone over the top of the other guys and my leg hasn’t been caught. I didn’t know how damaged the knee was. I was hoping it was a medial and I’d be back in a few weeks.

It was throbbing a bit on the flight home to Brissie – I had an aisle seat, so it wasn’t too bad – and I drove to Qscan in Windsor to see the specialist.

It was the news I was dreading.

THE LONG ROAD BACK

I was pretty emotional, I’ll be honest. I went up the street to be alone by myself for a while. The previous week we’d beaten the Bulldogs 42-12 and I was man-of-the-match. The Broncos were making a strong run for the finals and I was feeling confident in my game, having got the late call-up to the Maroons’ Origin camp earlier in the year. What an experience that was.

Suddenly, it was all over. I called Mum and Dad, Wendy and Graeme. I can’t quite explain why, but I felt like I had let them down. I know it doesn’t make sense, but that’s how I felt.

They drive the six-hour round trip from Dalby to Brisbane for every home game and seeing them is my favourite time of the week. They’ve had to get rid of their old Subaru Forester because of the hundreds of thousands of kilometres on the clock from watching me play! They get home about 1am the next day after most of our games.

I also called my fiancée, Carlie. We’re getting married at Elements in Byron Bay in January. Now, as well as organising everything for the big day, she was going to have to inject anti-blood clot medication into my stomach, help me in and out of the shower and who-knows-what-else.

One of the big goals in my recovery is being at full health and confident in the leg when we walk down the aisle together. It’s something to strive for.

The need to write a diary was overwhelming. Part of it was to give me a place to vent – about frustrations and pain and tiny, little wins – without bothering everyone around me.

I just felt … I don’t know. Empty? Angry? Sad? I haven’t got the right word. The weather was getting warmer. The crowds were getting bigger. My defence was good and my attacking game improving and I felt like I was playing the best footy of my career. And then – gone. All in a moment.

The next week was the hardest, in between getting the bad news and going under the knife. You feel like you’re standing still without making any progress.

The doctor gave me a bag – like a big bloody Coles bag – of tablets to take. Panamax. Endone. Tramadol. There’s a few I can’t remember. It was eight tablets in one set, taken four times a day. That’s your blood clot, pain, everything. It was around 32 pills-a-day plus an injection from Carlie once a night for the first ten days. They were for blood clots.

I’m surprised that I find myself sharing this next part with you because, as I’m writing this, I haven’t actually told my fiancée about it yet! It’s about the diary. It was just something that came to me. When I looked at what was ahead of me in one clump, I was looking at more than 250 days until I would be back playing.

It was a bit daunting. So I thought I would break it down day-by-day.

One of the big goals in my recovery is being at full health and confident in the leg when we walk down the aisle together. It’s something to strive for.

I wrote about the bad days and the good days. I wrote about how good it felt the first time I had a proper shower without a garbage bag around my leg (I stayed in there for 20 minutes!). And I wrote about my frustration when I tore my hamstring a little bit working on my knee.

I’ve been writing about how I’m feeling and try to finish with a few dots points about good things in my life. The wedding. The boys dropping around for a visit. Lunch with Carlie. Anything that might help me finish the day off on a positive.

I’ve also been doing a bit of reading, which I wouldn’t have had time to do if I was playing. I’ve just about finished The Mindful Athlete, which is written by a fella called George Mumford who was a bit of a leadership mentor for Michael Jordan.

THE BIGGEST INSPIRATION OF ALL

But there’s one thing, more than any other, that puts everything back in perspective if I find myself getting a bit sooky about my situation. Jharal Yow Yeh is making a video documentary about my recovery and we spend quite a bit of time talking to each other.

For those who aren’t familiar with Jharal’s story, he had the world at his feet. He was scoring tries all over the place for the Broncos, Queensland and Australia before suffering the most sickening ankle injury you could imagine. He put himself through hell to get back but that injury ended up finishing his career. He was 24 at the time.

Jharal has more reason than most to mope – he’s probably taken triple the pain medicine I’ve had to and spent countless more hours in rehab – but he’s the most positive person you’ll ever meet.

He’s always around the club and I hope that by documenting my recovery on camera he might be able to sell it or attract a bit of attention from a media company, because he’s a fair dinkum wizz when it comes to shooting and editing and putting music to vision. For me, it’s something I can look back on and hopefully learn from.

In a shit situation, working together with him is something we can both gain from.

Jharal and I sit and watch training sometimes and talk a bit about his journey. He’s been great. Tautau Moga and Jordan Kahu, my teammates at the Broncos, have both dealt with long-term injuries and they’ve had advice to give. I’ve also spoken to guys like Kurtley Beale, Clint Gutherson and Josh Mansour. Any little tip and insight helps.

Jharal has more reason than most to mope – he’s probably taken triple the pain medicine I’ve had to and spent countless more hours in rehab – but he’s the most positive person you’ll ever meet.

Gamedays are the hardest. I was saying that to Wayne Bennett the other day. I love watching the Broncos win but, gee, it’s hard not being part of it. You’d rather be out there and lose than not play at all.

It’s also hard knowing that there’s a massive chance I won’t get to play club footy with Benny Hunt again. We’ve been playing together since the under 12s and with him signing a five-year deal with the Dragons and me resigning with the Broncos for another four, that might be it for us.

But, more than anything, I’m absolutely determined to be back for Round 1. That will mean no Mad Monday, or really scaling it back, and shortening my holiday because I want to take advantage of every day, every hour in my rehab. I’ll be back a month before the rest of the boys are working on getting myself right for the start of the 2018 season.