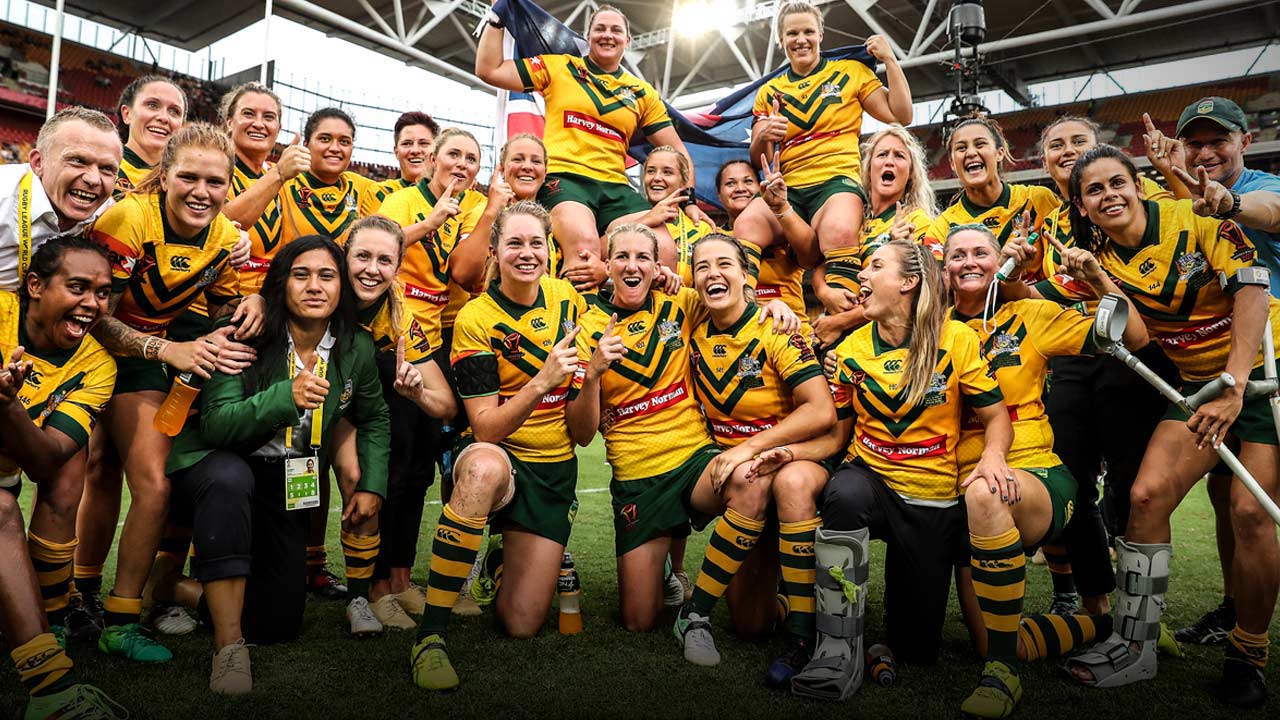 I’ve waited my whole life for this

I’ve waited my whole life for this

The first professional national women’s rugby league competition has been announced. Four teams will be competing. I am counting the days to kick-off but, dammit, the calendar is moving way too slowly!

Being a Queenslander, I’ve grown up following the Broncos. They’ll have a team. To represent them would be the realisation of a childhood dream. Actually, it’s more than that. It was far-fetched to the point that it seemed beyond anything I could dream.

It wasn’t all that long ago that I would rock up to play a game of footy and people at the ground would point at me and laugh. True story.

That actually happened at a representative schools carnival when I was 11 years old. The official match program listed the No. 9 for Met West as: ‘A. Brigginshaw (FEMALE).’

And it got even worse. I heard that before the carnival, some parents took a video of me in another game and sent it along with film of their son for the selectors to use as a comparison. Obviously, it was an attempt to sway their minds. You know, pick the male No. 9, not the female.

I never saw that video – I’m not sure if it was footage of me missing a tackle or dropping a ball or something like that – but it wasn’t nice. It showed what I was up against being a female in a so-called male sport. It was horrible.

Perhaps it provided some extra motivation. I was a very competitive type who loved the game to bits. I just wanted to play rugby league.

From time to time, I hear members of our Jillaroos team discussing some of the early obstacles they faced. Maybe it was expected in that era but the game was changing – for the better. Future generations certainly won’t have to go through the garbage many of us dealt with.

My father Larry was a very handy player for Ipswich in his heyday. He had taught me how to play. We spent a couple of years watching games, discussing the rules, the top players. My older brother Ricky ran at me hundreds, maybe thousands of times, as I was learning how to tackle.

It gave me an appreciation of rugby league and I guess for my age I got pretty good at it.

Those critics and parents on the sideline were awful. I blocked out the crap, went out there on the field and tackled everyone I could.

They were all boys, many of them way bigger than me, but I got a couple of dummy half runs in every game plus 25 or 30 tackles, which was always my goal.

I was a tiny thing back then but, thanks to Dad and Ricky, my technique was good. Those sideline critics were crushed when this bare-footed, 40kg ‘girl’ kept downing their 70kg superstars.

One of the players in that tournament was Chris Sandow who went on to be a gun in first grade.

He was so nippy, so fast. But when I came up against him, they named me the Player of The Match.

When I turned 12 and was entering high school, I was told I had no future in rugby league. Girls were not permitted to play. Rules are rules, I kept telling myself. But I loved playing more than anything and signed up to play touch footy.

I took an instant liking to that too and went on to play for Queensland and Australia. It wasn’t until I was 18 that I found a league team to play for – the Souths Logan Magpies. My career began there and took off.

I always wanted an outdoor job after I left school and I reckon it has helped my rugby league career. I drove a delivery van all around Ipswich and Brisbane for about eight years. Then an opportunity came up to work as a builder’s labourer.

That job led directly to what I do now: I’m with a building rendering company. It’s tough at times, very physical, but hard work has never worried me. Some days I mix 30 or 40 bags of render and carry two 30kg buckets of the stuff to various parts of a building site.

Hard yakka, as they say in the ads, but it can’t hurt a rugby league player.

Obviously, the Jillaroos games are the biggest part of my year and defending our World Cup title last year was awesome. Those games received wide TV coverage and really got people talking about women playing the game.

The reaction at home in Ipswich was fantastic. It’s a famous league town and has produced so many legends of the game. I’ll probably live in Ipswich forever. I love the people, the passion, everything about it.

Earlier, I mentioned that my dad as a very handy player in his day. He was way better than that. Larry – most called him Yogi – was a halfback for Brisbane Easts in the early 1980s.  He toured England with an emerging Queensland team in 1983. I’m told he was tough as nails.

Naturally, I’ve done a bit of research. That touring team contained the likes of Wally Lewis and Gene Miles and was coached by Arthur Beetson. Wow, Dad must have been some sort of player, I wish I could have seen him play.

At the height of his career, Dad signed on to play with the famous Newtown Jets in Sydney. He played one first grade game but they signed Tommy Raudonikis soon after – he was the number one half in Sydney at the time, so Dad ended up moving home.

The folks here in Ipswich love him and try to get him up to speak at functions. But he’ll have none of that. He’s too shy.

Those sideline critics were crushed when this bare-footed, 40kg ‘girl’ kept downing their 70kg superstars.

Locals are aware that I play league and many have been incredibly generous in terms of sponsorship. (Thanks Ipswich City Dental for all of those mouthguards … and a special wow to the guys from Alpha 390 who gave me a beautiful car to get around in).

When I walk down the street, people come up and want to talk about that World Cup. I find that so exciting. And then there are others who even stop to chat about my boxing.

If you haven’t heard about that, well, that’s my other sporting passion. When I broke my leg in 2015, I took up Muay Thai and boxing as a way of getting my fitness strength back. One thing led to another and I’ve had six fights for six wins to become champion in the Australian Golden Gloves Novice A category.

When I broke the leg, they put a plate and six screws in there. The pain was almost unbearable when I returned to the field. I thought my playing days were over.

I got hit when I had the screw in. It was agony. I found out I had a tendon rubbing on the screw and it was attached to the outside of my foot. My doctor decided to remove the plate screws and my leg began to heal way faster than before.

Boxing became my preferred way of fast-tracking back to the footy field – but it’s going to have to wait. League is still my No. 1 priority.

I just can’t stop smiling that you’re reading this.

Great times are ahead.

The thing I dreamed most about as a little girl – wearing a Brisbane Broncos jumper in actual games – could soon become reality.

Interest and excitement levels are going to crash through the roof.

I’m 28 now. I thought the chance had passed me by.

My early days were wonderful thanks largely to my mentor and coach Peta Curtin. She’s no longer with us, having died of breast cancer about eight years ago. But her wise words and inspiration will stay with me forever.

Peta was my school coach at Raceview Primary School in Ipswich. Later, I was thrilled to be coached by her in the Met West team. There wasn’t a day when she didn’t tell me to, ‘Keep on going – girls can do it!’

Chris Sandow was so nippy, so fast. But when I came up against him, they named me the Player of The Match.

She was so supportive, so inspirational for a young girl like me. She spent plenty of time helping me finetune my skills, especially in the tackling department as many of the boys I’d come up against were way bigger.

I was one of the first at her funeral mass at St Marys Church in Ipswich. Proudly wearing my Jillaroos’ jumper at the front door, I handed out dozens of leaflets on breast cancer as the people arrived.

It was the least I could do for such a wonderful woman.

When I retire, I want to coach young girls who have an interest in rugby league. If I can inspire or encourage just one of them to go on and make a career of it, I believe I will have done Peta proud.

She was a true champion, a legend in my mind.