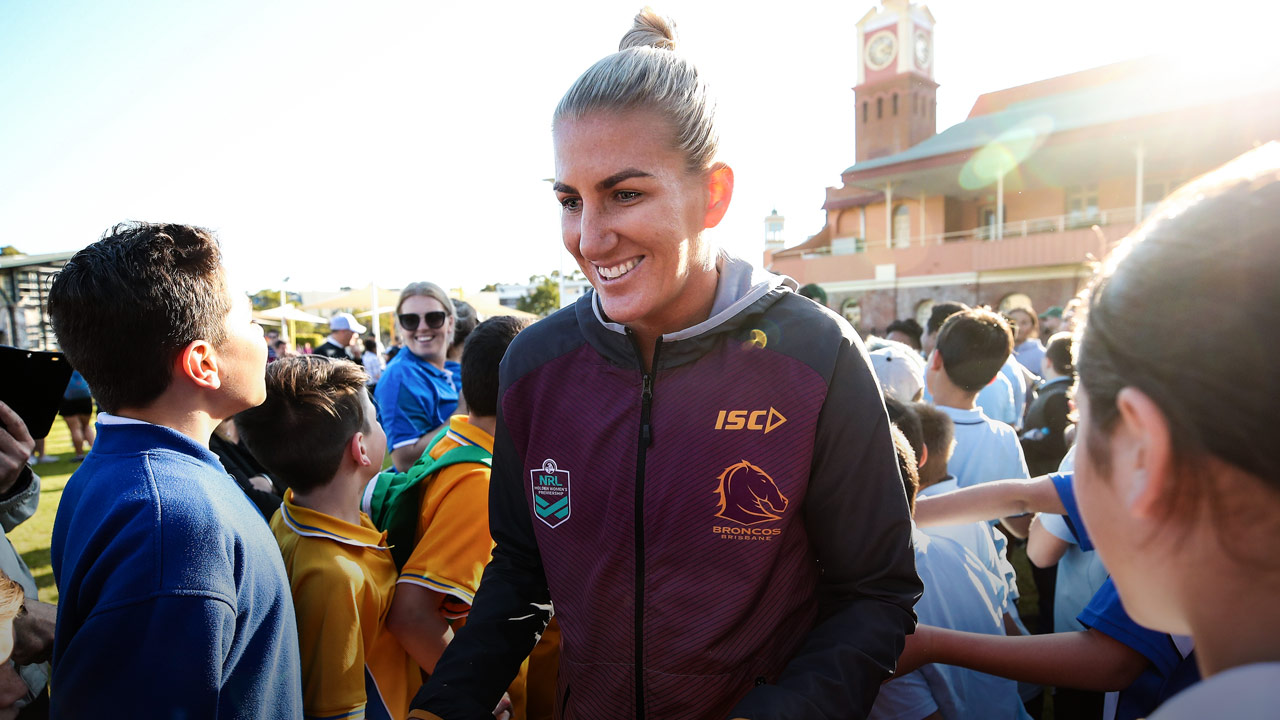 To the girl at the Ipswich shops

To the girl at the Ipswich shops

The other day I was at my local shopping centre in Ipswich buying some groceries when I spotted a girl wearing a women’s rugby league jersey. My heart almost burst with pride.

She wanted to be just like us. She has made an investment in what we do. And she has a dream that is now attainable.

Who would have thought that a few years back this girl would one day hope to become a Brittany Breayley, or maybe even an Ali Brigginshaw, sometime down the track when there was no merchandise, no obvious pathway and no elite competition.

It’s a new dawn. A revolution. All the girls in our new competition feel the same way.

I thought the chance to play professional footy had passed me by. I was told at the age of 12 there was no future for a girl in rugby league. I’ve held down work as a delivery van driver, a builder’s labourer and at a building rendering company since school. It’s only now, a few months short of my 29th birthday, that footy has become my main occupation.

Life has definitely changed for the better since the NRLW kicked off in early September. It’s kind of weird going to training and realising you are actually heading off to work. For those who have always had an elite pathway available to them, it might not sound like much.

But to me – and the many others playing in the inaugural NRLW season – it means everything.

We have to get our faces out there now and sell the women’s game. We must let people know who we are and what we’re about. Everyone is up for it. Honestly, it’s a thrill for us when fans, little kids – anyone – come up seeking autographs or selfies with us. It’s why we play the game. We’ll stand out there all day posing for pictures and signing if that’s what it takes.

The same applies on the field. The girls are all very professional. This is our new livelihood and you take it more seriously when there are high expectations – and when there is money involved.

We’ll all have to step up. Otherwise our game’s not going anywhere.

I received one of the biggest honours of my life just before my Broncos debut.

A personal locker was assigned to me in the dressing room at Suncorp Stadium.

It was the same locker Alfie Langer used during his playing days.

I was born and bred in Ipswich, where Allan Langer is an absolute legend. He was my undisputed hero growing up. I tried to imitate him in countless backyard games against my brother, Ricky. Over the years, Alf became a personal friend of mine and my family’s.

The day they gave me his locker, I was lost for words.

There are Broncos legends all around our team. Alf is one, and I’ll be trying to track him down this week before the grand final against the Roosters in the hope of picking up a few tips that might give us an edge.

Scotty Prince and Mick Hancock are on board as assistant coaches. With more than 500 NRL games between them, they have been huge influences on all the girls.

I don’t think any other NRLW team has anything like it. It’s a big advantage for us.

Fletcher Holmes, another ex-Bronco, is our defence coach. It’s no secret defence has been the cornerstone of our unbeaten run through to the grand final. Some teams haven’t been at their best over the entire 60 minutes. They’ve been found out.

Our coach Paul Dyer is awesome. He has been in the Broncos system for many years. Before every training session or captain’s run, he fires everyone up with a pep talk that makes you want to run into battle there and then.

He never yells, he just tells you how it is. That honesty is important. If he thinks we are doing something wrong, or aren’t switched on at a particular time, he doesn’t let us get away with it.

As skipper of Brisbane’s first ever women’s team, I could not be prouder of our girls and what they have already achieved in such a short time together. I feel as though I am part of a huge family. It’s very exciting and humbling.

I’ve held down work as a delivery van driver, a builder’s labourer and at a rendering company. It’s only now, a few months short of my 29th birthday, that footy has become my main occupation.

The support has been amazing ahead of the grand final.

The Roosters came together last week against the Dragon. They looked good. We expected that. But I honestly think our forward pack is fitter and stronger, probably because we’ve built everything up over four successive weeks while they had different people playing in different positions.

Having said that, there’s no doubt this will be a big game. We beat the Roosters 14-4 a few weeks ago. They’ll come out firing this time. It’ll be like a State of Origin game. It has that vibe about it.

If we happen to win the grand final on Sunday, I’ll dedicate it to all of the people who have believed in me and my dream along the journey.

That includes, my parents, my partner Kate, my family and friends and all of my coaches.

It also includes my earliest mentor and my rugby league inspiration, Peta Green.

Peta, her maiden name was Curtin, was my early school and rep team coach. I owe her so much for giving me the encouragement and determination to go for it. There wasn’t a day when she didn’t tell me, ‘Keep on going … girls can do it.’

She passed away about eight years ago from breast cancer. It was one of the saddest days I have ever known. I wore my Jillaroos jersey at her funeral mass at St Marys Church in Ipswich and handed out leaflets about breast cancer to people as they arrived. Peta was a truly great woman to me and hundreds of other girls.

Her young son, Cooper, tracked me down out of the blue a few months ago. Cooper is 14 and he attends Nudgee College. A few months ago, I did a story with Wide World of Sports. There was a picture of his mother with me. He put it all together and somehow made contact.

Cooper sent me a couple of messages to say he wanted to play NRL because of what his mother and I had done in rugby league. To hear that from someone I have never met – to have had such an impact on his young life – was a bit overwhelming.

When a female player is inspiring a male one, you know the game has come a long way.

To hear that from someone I have never met – to have had such an impact on his young life – was a bit overwhelming.

After the grand final is over, I plan to meet up with Cooper. I’m guessing he does it quite tough some days without his mum around. He’s only young. I am going to try and have an influence in his life if I can. It’s the least I can do after what his family have done for me.

Cooper’s mum was a huge part of my early life and set me on the pathway to professional rugby league. I will be running out with vivid memories of her on Sunday.

I’ll be thinking about my family, too. Mum and dad, Pam and Larry, my brother Ricky, my aunty, my cousin and Kate.

Dad has been one of my biggest supporters from day one. As usual, he has been a calming voice in grand final week. He’s very old school. “Just play it like any other game,” he says.

Happy birthday dad!! Thanks for everything u do for me! Always supporting me with rugby league I wouldn't be playing if it wasn't you teaching me back in the day love u ? #happybirthday #legend #grateful

Dad was a captain, a halfback, and he played in some very big stadiums during his great career. He did it all pretty much. He toured England with Wally Lewis and Gene Miles for an emerging Queensland team in 1983, which Arthur Beetson coached. Dad also played a first grade game for the Newtown Jets in Sydney, but they signed Tommy Raudonikis, so he ended up heading back to Queensland.

When dad says to treat the grand final like any other game, I am at an age where I can take that wisdom on board. I’m feeling really relaxed.

I used to get pretty nervous early in my football life but I’ve definitely got calmer as I got older. I guess dad has drilled it into me over the years. I feel that if I’m calm, everyone else is calm. If I’m a bit nervous, it seems to rub off on the rest of the team.

So I’ve really got to keep a cool head. I’m ready. Bring on the Roosters.