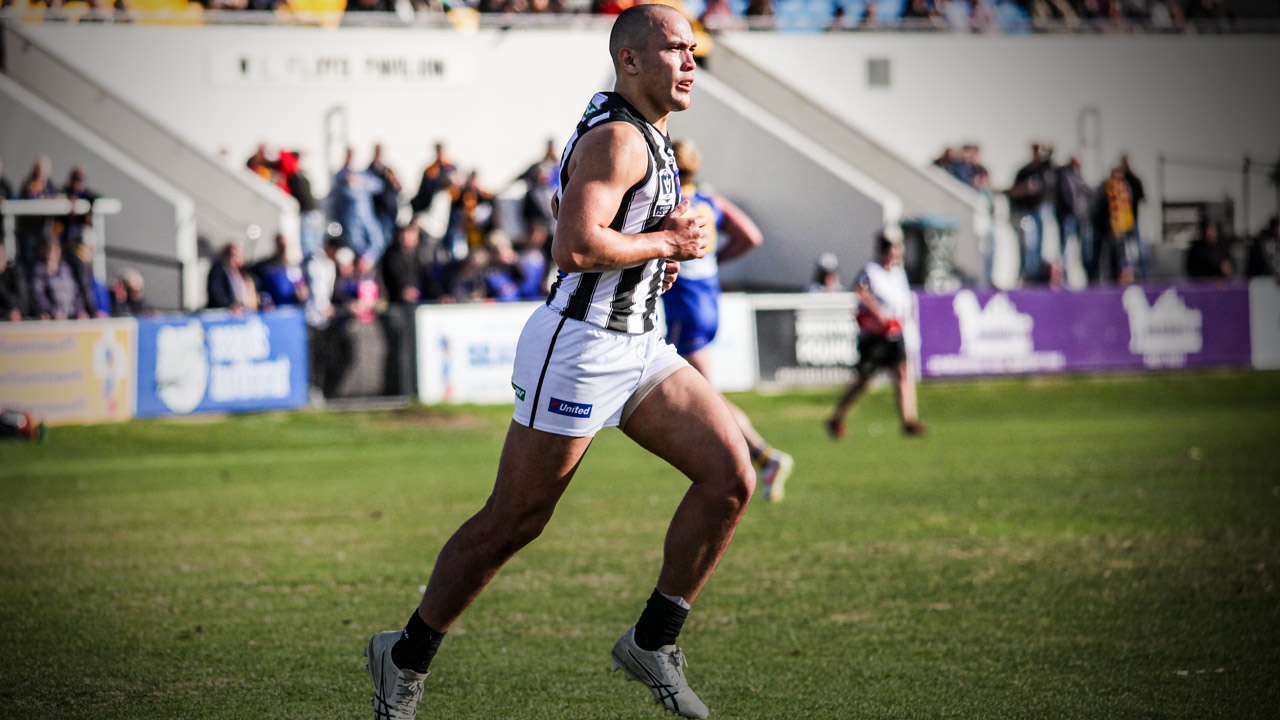 My passion for footy was reignited wearing fluro pink.

It was in that guernsey – the one I wore as a runner for Collingwood, communicating messages back-and-forth between Nathan Buckley and his players – that I realised I wasn’t ready to give this game away.

The game I love. The game I grew up wanting to play.

The game that has been cruel to me … but kind, too.

The thought of quitting had crossed my mind more than once. As a footballer freshly delisted by Hawthorn, I was playing VFL last year when I suffered my fourth ACL injury. I’d previously done it in a pre-season game against GWS in 2012 (out 10 months), a pre-season match simulation in 2013 (out 12 months) and a VFL match against Coburg in 2015 (out 12 months).

I knew all too well what was in front of me. The road to recovery is one I’m well acquainted with.

I’d lost my passion for the game by the start of 2018. Physically, I knew I could do the rehab – I’d had some practice! – but it’s the mental side of it that was proving most daunting.

And yet here I am, putting this story together after playing my first game back for Collingwood’s VFL team against Williamstown at the weekend.

A fourth comeback from serious injury.

Here’s how it happened.

The road back started with an offer from Collingwood – not in the form of a playing contract, but an opportunity to work as a runner.

After doing my ACL in 2017, I had delved into a little bit of coaching. I really enjoyed the mentoring side of the game. I felt like I had good communication skills when it came to delivering messages to the players. So, the running role, in many ways, really suited me.

There’s a lot of responsibility that comes with being a runner.

On the bench, I can hear Bucks’ message. I’ve got a phone to my ear and I sit next to Nick Maxwell who has dialogue with Bucks. He filters the message down to me. I take the key points out of that and deliver it to the players on field.

It can be a bit stressful but I loved it.

The plan was to do this for half a season, then reassess. I started during the pre-season games, which meant learning how to communicate with the players and delivering the messages properly. As it turned out, running was fantastic for my knee rehab.

The opening round against Hawthorn was great – I ran about 14-and-a-half kilometres. The distance covered can vary game-to-game and is dependent on injury. If we’re down a few players, I’ll be out there a bit more because we’re rotating quicker or guys need to change position.

The Anzac Day game was a huge moment for me. During the early stages of rehab last year, being out on the field again – any field – seemed so far away. So, to be out there on the Melbourne Cricket Ground in front of 90,000 people was absolutely electrifying.

It’s the same venue where I made my AFL debut in Round 18, 2014. To have the opportunity to return, albeit as a runner, was unexpected and something I will always cherish.

It reignited the fire in me.

From mid-April to the end of June, I returned to full training with the Collingwood VFL team. And at the same time my passion for footy was growing through my role as a runner – being part of the game week in and week – I was also rediscovering my touch at training on Tuesday and Thursday nights.

By mid-May, I committed to having a good six-week stint where I’d train hard with the aim to actually play on July 1.

A path had emerged.

The best part about coming home from work.

This has been the hardest of my ACL injuries because I’m no longer an AFL player, which means I don’t have the resources at hand 24-7 to get me back on the field.

I have been working part-time as a mortgage broker with the MCP Group while running for Collingwood and delving into the VFL system.

It was tough trying to strike that balance. I never under-appreciated footy being my fulltime job – although that was essentially what it was – but now I see it as a release from work. I’m in the office from 9-to-5, then look forward to training and playing. Finding this work-life balance was definitely a good way to find my way, find motivation again.

I chatted with some of my friends last week about how I hadn’t been in my ‘footy routine’ for quite a while. It was good to do it again on the weekend and get back to my old, simplistic pre-match rituals.

I don’t like to rush. I go for a walk and have some time to myself to do some visualisation. It wasn’t until Saturday night that it really hit me. I was cooking pasta and thought, ‘I’m actually doing this because I’m playing footy tomorrow not just for the sake of making a meal’.

I was excited. I embrace being nervous. It shows that I care.

I’d lost my passion for the game by the start of 2018. Physically, I knew I could do the rehab – I’d had some practice! – but it’s the mental side of it that was proving most daunting.

The plan on Sunday against Williamstown at Point Gellibrand was to have limited game time, roughly 75-80 per cent over four quarters, so I’d start each quarter on the bench then work my way in from there. I didn’t get on until the five-minute mark in the first quarter, which was fine, and I was pretty eager to get my hands on the footy. Thankfully, it didn’t take too long.

The first time I touched the footy was in a pack, but my first disposal was a carbon copy of what I’ve been doing at training. I ran into a spot on the far wing where I received the footy. I landed and took a kick that was in front of me. It felt great and came naturally to me again.

What was most pleasing was that those training drills and all the habits I’ve worked on over the years are still ingrained in my mind and body. I felt like I didn’t miss too much of a beat.

Being a runner was great preparation because I had been covering a lot of ground and didn’t feel unfit, but I just needed to find my touch again. It was great to get my hands on the ball and be in the contest again. That’s where I feel I do my best work.

Unfortunately, we didn’t get the result but I felt like I contributed to the team.

That’s why they got me to the club in the first place.

I am who I am today because of what I’ve been through.

The setbacks I’ve endured have helped shape me into the man I’ve become. An extension of that would be to hopefully inspire and help those around me – in a football capacity, but also in a more subtle way, like if someone was able to relate to my experiences and take something out of them.

I have seen footy from quite a few vantage points.

I was drafted at 18 and spent five years at Hawthorn. I was fortunate enough to play two AFL games and win the Liston Trophy as the VFL’s best-and-fairest there. I also suffered three of my four ACL injuries at the Hawks before the move to Collingwood.

I’m 25 now and, with the benefit of hindsight, I can see how my battles with injury have built character and taught me not to take anything for granted. Each time I come back to footy, I appreciate it more and have more fun with it.

I know it doesn’t last forever. You never know what’s going to happen.

Little wins… happy to be able to do this again ?#4titude

I’ve also learned to become more resilient, stay determined and have clear goals for what I want to achieve. That has transferred into my everyday living.

I’m very lucky to have been involved with, and embraced by, two really strong clubs with strong values in Hawthorn and Collingwood. I can’t speak highly enough of the Hawks and, more recently, the Pies, who continued to find ways to keep me involved with the club even though I wasn’t in essence doing what I was recruited there to do for a while.

Collingwood helped me find my passion to play footy again. For that, I’ll forever be grateful.

Playing AFL remains an ambition, but for me right now playing football at any level is an achievement given what I’ve been through.

I want to enjoy my footy, focus and not overthink.

I don’t have a target necessarily.

If I don’t play AFL again, that’s not a failure. If I do, I’ll grab the opportunity with both hands.