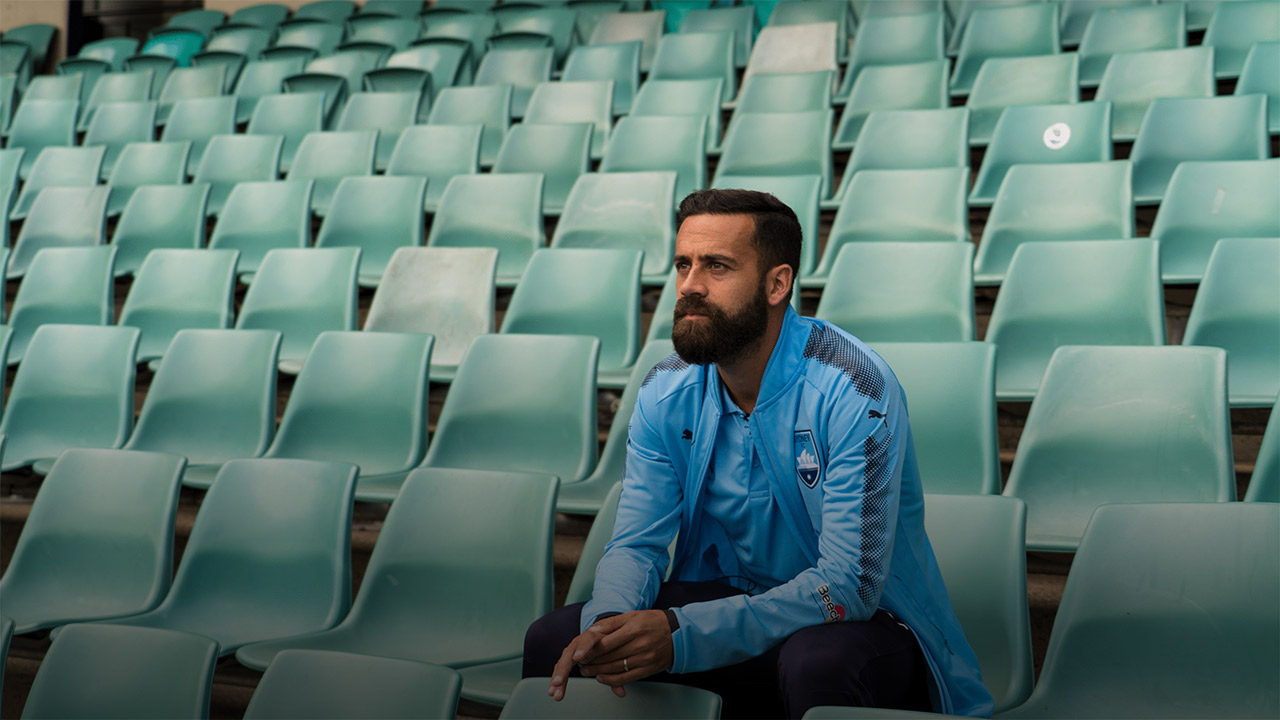 A club is more than its players, its coaches, its support staff and its stadium.

A club is its fans. And in Sydney FC’s case, the club is William Duran.

William died of cancer in 2012. In life and death, ‘Doggadog’ taught me so much about what a club really is. He cheered our successes, he despaired at our losses and he always, always sung his lungs out. He was one of the most passionate people in Australian football.

I was back in Sydney after my first season playing for Shimizu S-Pulse in the J-League when I was invited to sit in Doggadog’s old seat in Bay 23 of Allianz Stadium.

We’d met a few times. He lived nearby. He worked in real estate and we crossed paths when my wife and I were looking to buy our first house. And we’d obviously met after games and at Sydney FC events.

I was asked to sit in his seat at the Sydney FC-Mariners game as a sign of respect and appreciation and because I was his favourite player. I was a little nervous initially. I didn’t want it to come across as a PR thing. So I contacted the club. They said his family would be honoured.

I’d never sat in The Cove before. It was very emotional. Walking down through the supporters, some looked surprised to see me and the buzz started to build. The word got around quickly. They started singing one of my old songs.

I was introduced to Doggadog’s sister and told her I was here for one reason: to pay my respects to a great man, a loyal Sydney FC fan. She was a bit overwhelmed. A few people were. And then all of us – the fans and the players with linked arms – observed a minute’s silence before the game while a banner reading the passion, the tears, the glory was unfurled.

I will never forget the emotion of being in William’s seat throughout.

The experience showed me how strong the fans’ loyalty is and how Sydney FC is defined by the bond between the club, the players and the fans.

As a former player standing on the opposite side of the fence looking back at the team, I felt the passion the fans feel. It’s something all players should experience, to really understand both sides of the fence.

I have William to thank for that. He will never be forgotten by this club.

Last season was remarkable in many ways. The most points ever, the most wins, fewest goals conceded, most clean sheets – just to name a few records – culminating in the title.

We’re determined to build on what we did and not let it be forgotten. We want people to continue talking about us as the champions and as the greatest team ever.

We want to build a dynasty.

It can’t just be a one off. No team has ever won the Premiership and Championship twice in a row. That’s our goal this year.

As the records fell last season and we went on that winning streak, every other team wanted to be the one to beat us.

You have to be on your game every single week. We handled the pressure and the experience will serve us well heading into this season.

It feels great to be on the eve of the season. First up is Victory in Melbourne. What a way to start it off.

Last year was no fluke. It was three years of hard work. Graham Arnold spent two years researching, building the right group and molding it into the exact team he wanted.

This year I’m excited again. Obviously, you need a bit of luck on the pitch at certain moments and with injuries but if you build the right platform, I think you’ll always succeed.

The word ‘culture’ gets thrown around a lot in sport but it’s important. You can see that in the best teams around the world and how they consistently perform at the highest level.

Arnie built a family culture at the Mariners but it was probably easier for him to create that atmosphere and environment there – it’s a smaller town and everyone lives within 15 minutes of each other.

In Sydney, the boys come from all over and it was hard to get them to hang out or be together day-to-day, away from football. It took a bit of time, but Arnie has changed that.

As a former player standing on the opposite side of the fence looking back at the team, I felt the passion the fans feel. It’s something all players should experience, to really understand both sides of the fence.

He has built such a good environment at the club that even the new boys who have come in this year fit straight in without any issue.

Before he brings a new footballer into the club he wants to know what they’re like as a person. He does his research. Do they have a family? What kind of a person are they away from football?

That makes such a big difference, because we don’t have any egos in the team. You have 20 guys that are all in it for the very same reason. That’s rare in a football club.

In a league with a salary cap – where teams can go from first to last and then first again – Arnie has built a team that will see Sydney stay in the top two or three every year. That’s where Sydney FC belongs.

I know that’s what is expected of us and it hasn’t always worked out but I genuinely believe this club is the biggest in the country. Everyone is starting to see that now.

‘EVERY EMOTION, ALL AT ONCE’

I reckon the team we put together last season, my eighth season with Sydney FC, was the greatest to ever play in the A-League.

There are so many incredible photos of that moment, when Milos Ninkovic scored the final penalty to defeat Melbourne Victory and we all took off running. They give me goosebumps every time I see them.

It was every emotion, all at once. There aren’t many times you get that feeling during your life. Obviously having kids is one of them but, as a sportsman, I’d never experienced it before.

Yes, we won the 2010 Grand Final in Melbourne but winning it here, in Sydney, was different. It was a privilege and an honour and something I’ll never forget.

Last season has gone down in the history books. Records were set and trophies were lifted.

It was every emotion, all at once. There aren’t many times you get that feeling during your life. Obviously having kids is one of them but, as a sportsman, I’d never experienced it before.

But a run like that doesn’t mean as much if you don’t win the most important game of the year. Arnie made sure we were very aware of that fact. If we didn’t win the Grand Final, it would all count for nothing.

We were very much outplayed by the Victory when we faced them in the decider two years earlier.

Losing 3-0 against our rivals in their home stadium was heartbreaking, but we learnt some valuable lessons that day. None of us wanted to feel like that again. We knew it would feel so much worse losing at home.

I felt an unbelievable sense of disappointment when we conceded the first goal. I remember thinking, ‘It’s not going to be, it’s not our night.’

When Rhyan Grant put the equaliser away, the crowd went absolutely mental. It was so loud. We were all celebrating together in the corner and felt like the game was our’s to take.

The winner didn’t come, though. We had to make it through extra time.

It came down to penalties. After Alex Wilkinson missed our second one, I was hardly able to watch.

Victory led 2-1 but then they missed two in a row. Danny Vukovic made a huge save against Marco Rojas.

It took me a second but then I realised, if Ninko scores, it’s over. All the tension and anxiety had built up to this one moment and I just felt relief. When I saw him stepping up to take the penalty I just knew that everything had fallen into place.

He’d won the Johnny Warren Medal, he’d been the best player in the league by far and it was his moment to win the Championship for the club. I knew it was going to happen. The football Gods were smiling down on us.

Speaking to a couple of the Melbourne boys after the game, they agreed that we deserved it – just as much as we agreed that they deserved to win two years before.

I took off running to the right but everyone else went left. I started to follow them but then I saw David Carney going off on his own and I knew I had to go to my old mate. I ended up down in the other corner, hugging him.

Carney is my roommate when we’re on the road and we’d spoken during pre-season on the Gold Coast about how we were getting on and wouldn’t have many years left in us.

We had a laugh, because we grew up together and our families are close. We’d gone to school together at Westfield Sports High and, as 13-year-old boys, we never would have imagined that all these years later we’d be playing together for our home club every week.

We’d spoken about how great it would feel to go on and win a Grand Final together. So when I saw Carney running off, that all came back to me.

In the days after the game we sat down and spoke about it again. It was a dream come true. You play for those moments but very rarely do people get to share it with a mate they’ve known for 20 years.