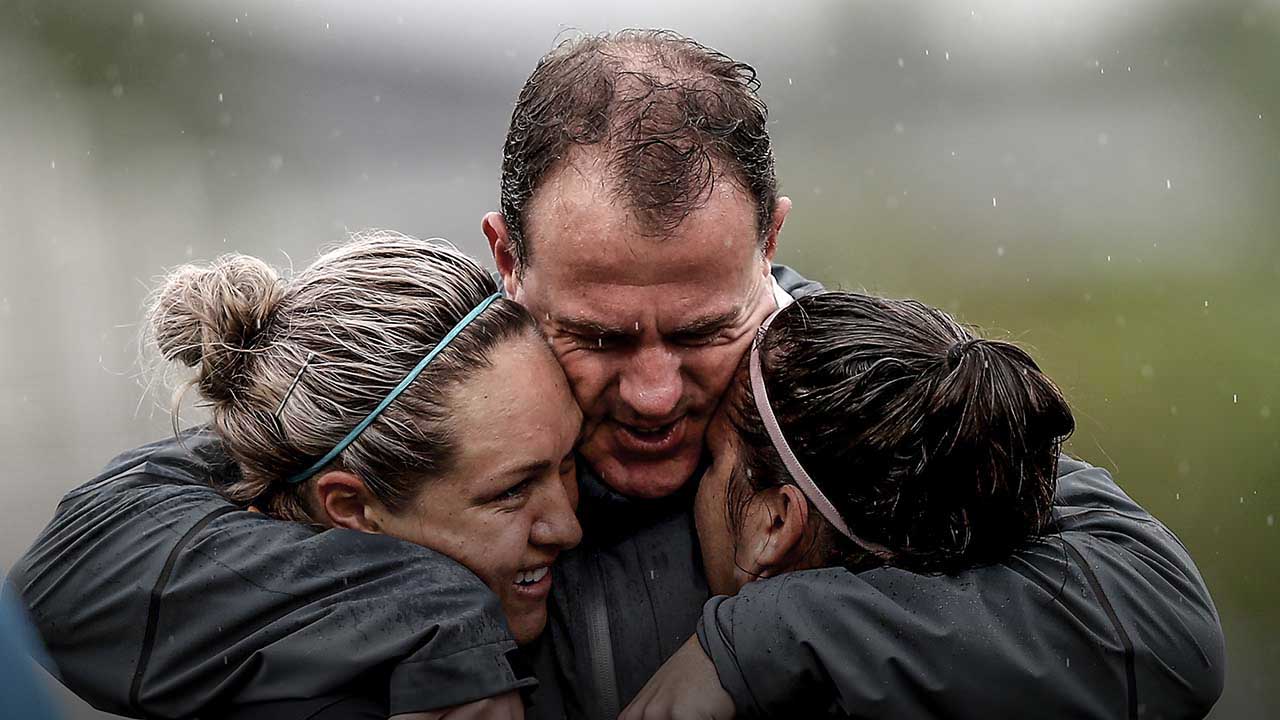 The great women players who represent the Matildas have battled inequality all their football lives. They’ve been the victims of … discrimination is a hard word, but definitely ignorance, apathy and a lack of respect.

They’ve been through the school of hard knocks and come out intact. That’s what I admire about them the most. That’s what draws me to them as people. That’s why I’m proud to coach them.

When you have those sort of life experiences – where there are constant hurdles placed in front of you – you become aspirational in your attitude. If you’ve had to fight for everything you’ve got, you want to strive to get even better and achieve even more.

That’s the Matildas I know, these players who have taken this team to new heights and will represent their country in two games against Brazil at Penrith on Saturday and Newcastle on Tuesday.

The women’s game has come a long way in Australia. But it has come from a long way behind. So it still has a long way to go.

It was never easy for them, coming through the junior system. In fact, it was often very difficult, and not just for the young girls at grass-roots level, but right through to the older girls and young women who had been identified as elite. They didn’t get an even go.

I’m talking about access to facilities and resources and opportunities that are so critical to a young player’s development.

Football has had such a macho culture for over 100 years and trying to break down a lot of the systems that were in place has taken 20 or 30 years.

We’ve seen progress over the last 10-to-15 years – including this week with the FFA and PFA delivering a new pay deal for the women in what is a landmark development – but there is so much more still to be done to achieve equal opportunity for every young girl compared to every young boy who plays football.

They’ve been through the school of hard knocks and come out intact. That’s what I admire about them the most. That’s what draws me to them as people.

This is not about money. This is about access and that should be a lot easier to deliver because the access is available. It just has to be fair and reasonable.

The word I’d use is ‘care’. Do we care as much about the girls’ or women’s teams as we do about the boys’ or men’s teams at a club, or in an elite program?

Where an elite program might take in 20 boys, but only five girls. Where the men’s team get the main field to train on, using the best resources, and the women are training out the back on rough old ‘field five’. Those kinds of things are still happening.

We have to keep working to change that and why wouldn’t we when we already know how great the women’s game can be and how big a force the Matildas are becoming on the international stage.

The Matildas are ground-breaking. They’re game-changers.

The amount of attention and recognition they’ve already received for their efforts in the last couple of years will further push the cause of all female sportspeople in Australia.

We’ve seen a revolution of sorts in the last few years in women’s sport in this country. It’s not before time. The amount of effort they put in and their dedication to their sport is no different to that of an elite male athlete. The Matildas have sold out Saturday’s game and it’s shaping up as another big crowd on Tuesday.

People ask me why I think it is the Australian public is warming so much to the team.

They go out to do their best every time. They fight to the death. They show joy in victory and disappointment in defeat and people like to see that because it shows how much representing their country means to them. It’s raw and it’s real.

We play an attacking brand of football. And we’re always going for goals and going for the win and backing ourselves.

The players stay humble and, regardless of the result, they shake hands with the opposition and say ‘well done’. All of this is symbolic of what Australians expect from their elite sportspeople, but don’t always see.

We competed strongly at the World Cup in 2015 and went to the quarter-finals there, beating Brazil along the way. And then at the Olympics last year we again went to the quarters and, even though we lost to Brazil that time, we still gained credit because we fought for the win right to the end.

Now we’re coming off the recent Tournament of Nations in the US, where we had stunning wins over three world-power teams – the US, Japan and Brazil – to take out the event.

What those wins – especially over the US, whom we’d never beaten before and hadn’t even drawn with for more than a decade – has done for the confidence and self-belief among the players is enormous.

They go out to do their best every time. They fight to the death. They show joy in victory and disappointment in defeat and people like to see that because it shows how much representing their country means to them. It’s raw and it’s real.

No one ever said it, but you could always sense it. There was that little bit of fear and intimidation whenever we played the US. They’ve pretty much been number one in the women’s world rankings since the rankings began.

But I felt we were in the same ball-park as them the last two or three years. To finally get the win and scale that height tells us we can beat any given team on any given day.

It’s no longer talk that has some false bravado about it. It’s fact.

But the new challenge for the Matildas is to repeat that performance game in, game out, which is the only way you can build up to win a World Cup or an Olympics. You’ve got to be able to play at that high level six or seven times in a row in a tournament setting.

The strength of this team is in the standards it sets and holds. The behaviour, the expectation, the culture, the closeness, the bond, the way the women carry themselves – in and out of the spotlight. Everything, right down to what they eat, how much sleep they get and what they use for motivation.

I think we’ve seen over a long period of time that any successful team is built on strong bonds. You only have to look at the great teams in Australian sport over the last ten years, such as the Sydney Swans in the AFL and the Melbourne Storm in the NRL, to know that.

Whoever goes there always ends up playing their best footy. They could be an average player at another club and all of a sudden they’re playing at the peak of their careers. Then, if they leave the Swans or the Storm, you see a little bit of a trough for those players.

There must be something special in what these clubs do. And for me it must come down to culture, behaviour and expectations and we’re keen on expanding all those lessons.

We’re not there yet, but it’s where we want to go. We’re still an evolving group, a maturing group, and we want to become that team that’s consistent over a long period of time.

We know we’re not going to win every game and every tournament, but as long as that culture of success and closeness and consistency and maturity and professionalism is there it will go a long way to making a team that’s successful.

Not just for one or two years, but the long-term. We’re setting the bar extremely high.

Pretty much every country plays football and, in the vast majority of those, it’s a passion and a religion and the number one sport. The Matildas are ranked sixth in the world at the moment. To crack the top three would probably be one of the biggest achievements of any Australian sporting team ever, when you consider the challenges.

I want to win. I want to be the best I can be. And I want the women to be all of that as well.

I’ve brought in staff who will challenge me and the group to be better. I’ve made some tough choices in terms of putting things in place that carried some risk, but with the intent of pushing all of us to get the best out of ourselves.

We know we’re not going to win every game and every tournament, but as long as that culture of success and closeness and consistency and maturity and professionalism is there it will go a long way to making a team that’s successful.

I grew up in a coaching environment at the NSW Institute of Sport surrounded by champions in swimming, rowing, cycling, athletics and diving. But the aspiration in football was different.

It was always just to qualify for a World Cup, or to win a game, or have an honourable defeat.

I was always astounded at how low we set the bar for football in this country. We’ve almost had an inferiority complex for so long, but I don’t see any reason why Australia can’t be a world leader in the world game. To do that, we need to do everything right on and off the field.

Yes, it is a big challenge. For so many reasons we’re punching above our weight: being detached from the rest of the world, not being able to play as many games as other countries, or have as much money to fund it, dealing with travel, jet lag, time zones.

But we have so many advantages to being Australian as well – the environment we live in, the aspirational qualities of our society, we’re always fighting to be better. We’re a country of hard battlers by nature and people who have always come here with the intent of forging better lives.

When you combine all those qualities and bring them out on the sporting field, there’s no reason we can’t be the number one team in the world.

If you look at Australia’s history you’ll see we’ve punched above our weight at so many other sports and achieved things the rest of the world said we couldn’t achieve.

Why can’t we do that in football as well?