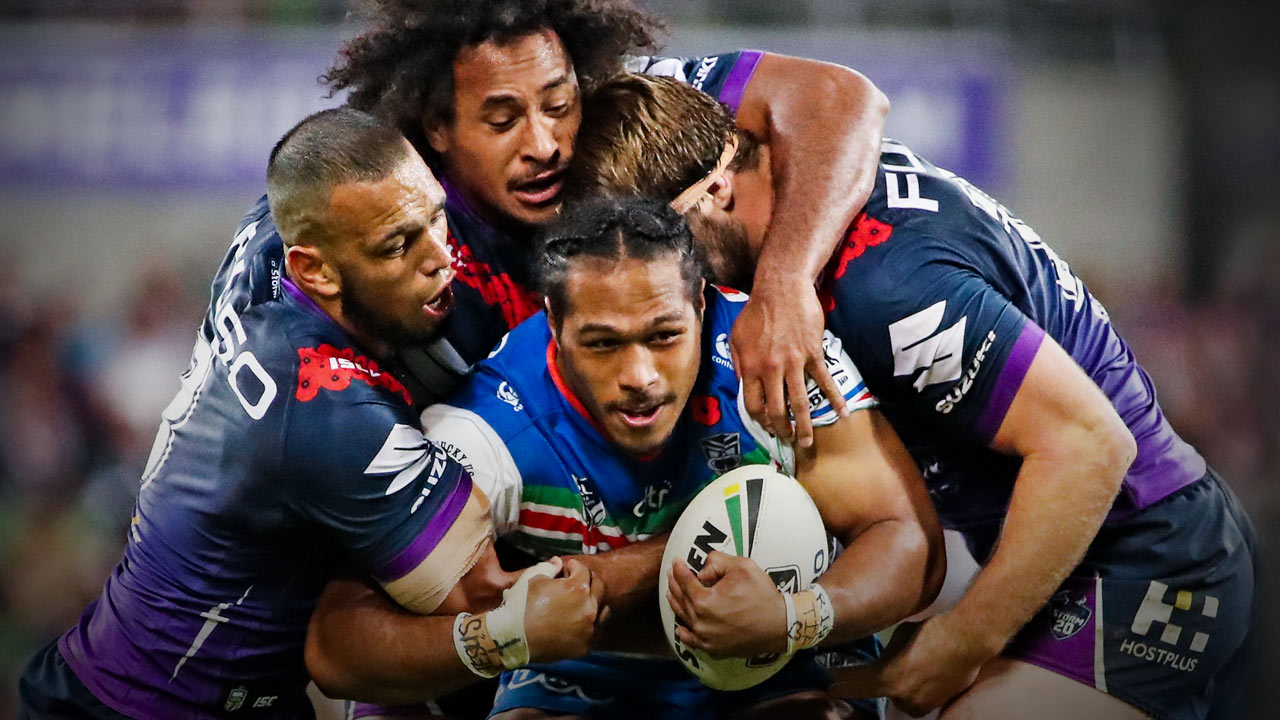 Everything I do is for my family. It’s why I left the Warriors in the first place – and why I came back.

My partner Chloe and I had only one child, Manatoa, when I signed for Gold Coast at the end of 2014. Now we’ve got four, all boys. Manatoa is six, Agnatius Jr is two, Ilaisia is one and our latest addition, Knox, is just two weeks old.

I think that’ll be it for the Paasi family. We’ve got plenty to keep us busy.

Being a father of four at the age of 26 is a huge commitment, but I’ve never been scared of taking responsibility or making big decisions.

I’d won an NYC grand final with the Warriors in 2011, played three good years of NSW Cup for the club and represented Tonga, but I only had one first-grade match to my name.

I needed a change for the sake of my career and, when the Titans made me an offer, it suited me because I’d been to the Gold Coast before. Keebra Park gave me a scholarship and I played there before some issues with my visa meant I had to go back home to Auckland.

I got what I wanted at the Titans. I became a regular first-grader straightaway and learned a lot from experienced players like Nate Myles, Greg Bird and Luke Douglas. Key stuff about how to become more dominant as a forward and pick up on the opposition’s strengths and weaknesses.

I played finals footy for the first time in 2016. But last year was disappointing. We got a lot of injuries – including myself, with the shoulder – and there were a few distractions. The Neil Henry and Jarryd Hayne thing was going on.

Chloe fell pregnant again and wanted to go back to New Zealand to have the baby. All of her family and mine were in Auckland, so we couldn’t get that support on the Gold Coast. It was tough on Chloe with three young kids if I was away with footy and now we were having our fourth.

I got a release from the final year of my contract with the Titans on compassionate grounds and signed a new deal at the Warriors.

It was the right thing for my family and my footy. This was my chance to make it happen for me at the Warriors, the second time around.

People like to criticise the Warriors from a distance and even poke fun at the club. They say the culture’s not good enough and that we fall apart easily.

But there’s something really good going on here right now.

The last pre-season was the toughest I’ve ever had. The club’s new strength and conditioning coach, Alex Corvo, taught us new lessons about holding it together under fatigue.

It was punishing, but there was enough variety in the work we did to make it enjoyable. We pushed each other hard and got fitter and stronger than we thought was possible.

It doesn’t end at training, either. Alex challenged us to be just as disciplined away from that with our diet and everything else and I know I’ve responded to that. I’m keeping my weight down and feeling good, but I still want to get better.

It was the right thing for my family and my footy. This was my chance to make it happen for me at the Warriors, the second time around.

If the Warriors were a 60-minute team at times in the past, we were determined to be an 80-minute team in 2018.

We are aiming high. Just making the finals isn’t enough. We want to finish top four and become the first Warriors team to win a premiership.

But you can’t just say it. You have to make a genuine commitment to one another as players and coaches if you’re going to have any real hope of making it happen and we talked openly about that in the pre-season.

Steve Kearney said he wanted us to have fun and enjoy our footy, but that, above all, it was going to be about working for each other. If you let your teammate down, you were going to be accountable.

The new signings have been massive. Guys like Blake Green, Tohu Harris, Adam Blair and Peta Hiku are proven winners and they’ve come here to play.

The leadership and experience of boys like Greeny, Blairy and Issac Luke, in the great form he’s been in, has made it easier for me and the rest of the forwards to just do our jobs, get that go-forward happening and perform as a unit in the middle of the field.

We won our first five games and six of our first seven, but in a competition as tough as the NRL you can’t afford to be off your game or someone will teach you a lesson. That happened to us against Melbourne on Anzac Day.

Our preparation was good, but they came out firing and we didn’t match that. It’s tough stopping a team with as much momentum as they had, playing at home.

It was 38-0 at halftime. The good thing was that we didn’t let it become 76-0. The end result, 50-10, was still bad, but at least we competed in the second half. We looked at it as part of a learning curve and we can’t wait until we play them again.

But we still had to answer for the size of that loss and it came back to being accountable as individuals. When we were defending on our own line against the Dragons and they were throwing everything at us, we kept sending them away. We didn’t do that against Melbourne.

We had to get back to the mindset of being a really desperate defensive team and the good thing was we had 10 days to work on that before our next game against Wests Tigers.

We had a four-day break from training to start with after getting back home and we used that to clear our heads before coming back on the Monday and getting stuck in again.

Two bad games in a row and you’ve got something to worry about. Learn from what you did wrong and you’re back on track. We beat the Tigers 26-4. It still wasn’t our best football, but it got a tick.

We were heading in the right direction again.

Rd #9 SKYCITY Player of the Day

The round nine SKYCITYLive Player of the Day is Agnatius Paasi with 171m and four offloads. #LetsGoneWarriors

Posted by Vodafone Warriors on Tuesday, 8 May 2018

That four-day break came at a great time for me personally.

Chloe was a week overdue when I left for Melbourne with the team and the doctor was planning to induce her after I got back. I flew back into Auckland with the team on Thursday and took her to hospital that night. She had Knox the next day.

Chloe is from the island of Niue, which is east of Tonga, south of Samoa and west of the Cook Islands, but she is also part Scottish.

Knox is a Scottish name that means from the hills.

He was fine and Chloe doesn’t like staying in hospital any longer than she has to, so we brought him home the next day. Our other boys adore him.

I’m not getting as much sleep as I would like at the moment. I try to sneak in a few hours when I get home after training, but other than that it can be difficult.

But again, it’s about taking responsibility. I’m a hands-on dad. When the baby wakes up during the night, I like to get up and help Chloe.

Ilaisia has been a bit restless, so he’s sleeping with us at the moment. I try to put Agnatius to bed, but he sneaks back into our room during the night.

He wanders in at three or four in the morning and tries to crawl in between me and the one-year-old, but it’s a bit of a tight squeeze so he sleeps at the other end of the bed.

I’m not getting as much sleep as I would like at the moment. I try to sneak in a few hours when I get home after training.

Chloe’s looking after the baby and I’m trying to look after the other three.

I’ll go back and forth to sleep during the night, but if I’m a bit tired I can’t use that as an excuse when I go to training. I have to come out with the same energy as the other players.

So what if I’m a bit tired sometimes. That’s nothing to complain about. Complaining is a waste of time anyway. It just sucks the juice out of you.

I’m a Christian and my faith helps keep me calm and level-headed. If I’m ever finding things a bit hard in life, I refer back to the Bible and just read some scriptures to help me get through the day.

And I look at my young ones and think, ‘That’s why I’m doing this, why I’m being disciplined and playing footy, so I can look after them and teach them good ways in life’.

They’re the best motivation I could have.