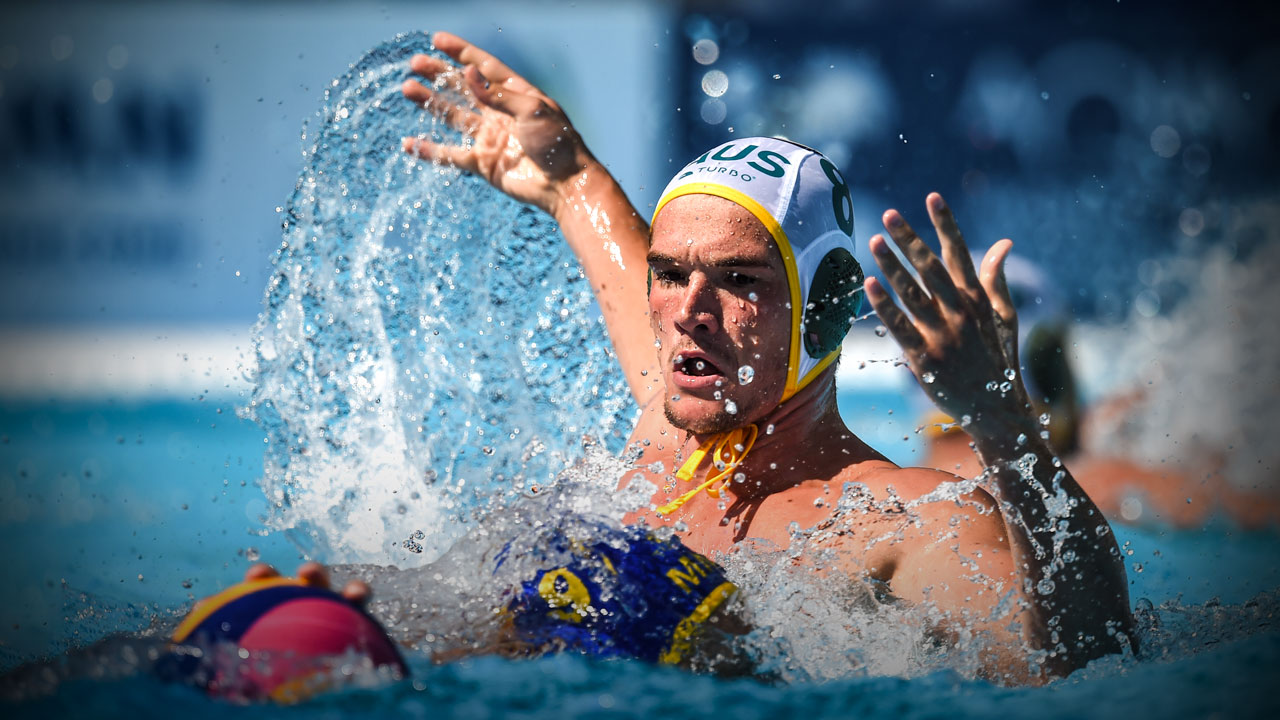 It’s tough to reach a world-class level of your chosen sport and get little recognition for it at home – though not for the reason you may think.

I’m the captain of the Australian water polo team, the Sharks, and have also been playing professionally in Europe for seven years. I’ve won silverware in the world’s toughest league, in Hungary, plus club water polo’s most prestigious tournament, the Champions League.

The lack of recognition is frustrating not for selfish reasons, but because I haven’t had as much opportunity as I would have liked to inspire the next generation of water polo players. To tell the Australian public, beyond the tight-knit water polo community, what a great sport we have.

It’s hard to recruit kids when all they see on TV is AFL and NRL players. So often, kids are directed into those traditional Aussie sports a young age, just because that’s the way it’s always been. They often leap right back out again because they don’t enjoy them.

Lots of kids would enjoy the alternative to the traditional land sports. Playing in the pool is a lot more enjoyable than on land on a 40-degree day!

There is very rarely any media on water polo. I don’t think that many kids, without being brought into the sport through family or friends, would know much about water polo at all, much less have role models who they aspire to emulate.

My dad, Ron, was a swimmer, so I was always around the pool and did a lot of swimming. Though I played a lot of sports, including footy and rugby, we lived around the corner from Melville water polo pool in Bicton, Western Australia. At about the age of 10, I just fell in love with water polo.

I’ve been playing it ever since.

I’ve been fortunate enough to do the latter.

We’re in the middle of an Olympic cycle and right now, the Sharks are in Berlin to compete at the World Cup. It’s the third-biggest international tournament we play, outside of the Olympics and world championships, and it’s the biggest of this year.

We’ve medalled at the World Cup just once, a bronze back in 1993. I think we can do it again this year. The boys are ready and we expect to do something this week.

Serbia and Croatia are, as always, the teams to beat. They’re the current Olympic and World Cup champions, and the current world champions, respectively.

They’re also in the other group, with the USA and South Africa. We have Germany, Hungary and Japan in ours and are aiming for at least a top-two finish, to avoid Serbia and Croatia in the quarter-finals.

Outside of them, it’s an open event.

We’re looking at using this World Cup to springboard us into the 2019 world championships in Gwangju, Korea, and the Tokyo 2020 Olympics. Every year, the major tournament result also affects our Australian Institute of Sport funding.

If we can get a good result at the World Cup, it will help us to focus on getting a strong result at the Olympics. For private sponsorship, too, getting positive results is always important.

There will be a learning curve for everyone at this tournament, thanks to a rule change: the reduction of teams from 13 to 11.

It’s hard to know what the precise impact will be, but obviously fatigue will be a greater factor; especially at a tournament that already has a gruelling format of six games in six days.

Everyone’s in the same boat, though I think it will be an advantage for the Australian team. We rely more on speed and fitness than some other teams, which are older and rely more on skill and strength.

COMPETING WITH THE BEST

There was a time when Australia beat the best in water polo. I was lucky enough to be a part of it.

The Australian team won gold at the 2009 University Games, beating Serbia in the semis, then Croatia in the final. It was a great thing to be a part of, especially given we played in the Serbian capital, Belgrade.

A few guys – Richie Campbell, AJ Roach, and myself – are still with the Sharks. That gold medal definitely left us hungry for more.

It was a moment when we realised it was not impossible to compete with those big water polo nations. The talent is there. It’s just a matter of building up our national team and having a belief that we can reach that level in the future. The Australian men’s team has never reached the Olympic podium.

Here is what we’re up against.

Serbia’s recent dominance comes from a long, historic school of water polo. They have a deep culture in the sport that is hard to replicate.

They love the sport. They take a deep pride in their history of success. Many of their local heroes are water polo players and to make the national team is a massive goal for young athletes, in the same way that many Aussie kids dream of making the NRL or AFL, or the Australian cricket team.

That’s where it begins. Then there’s the professional leagues.

Domestic water polo in Australia and Europe are incomparable, thanks to the full-time professionalism of European clubs.

Top players in Europe don’t need to work, and the living they make from the game is far above the wages of the average citizen. All basic living expenses are covered and, for world-class players especially, the salary on top of that is substantial.

The lack of recognition is frustrating not for selfish reasons, but because I haven’t had as much opportunity as I would have liked to inspire the next generation of water polo players.

The sheer volume of games and training was a steep learning curve when I first arrived as an 18-year-old.

You’re looking at two training sessions a day, perhaps with an afternoon off every third day. We play 50-60 games per season, so at least once a week but often Wednesdays and Saturdays. You’re competing in the national championship, the national cup and the Champions League, so you’re always preparing for the next game; and always with one eye on finals, trying to peak at the right time.

Then there’s the Australian system, which needs to be developed further. Water Polo Australia is currently trying to improve the national league’s overall competitiveness, to ultimately help us on the international stage.

The fundamental difference is that it’s not a professional league. Guys have to work, because water polo isn’t paying the bills, so although we have plenty of talent, the depth is understandably not the same as the world’s top leagues.

The only way we’re going to be able to build more elite players is through the domestic leagues, because the international schedule only accounts for a small amount of the year. We’ve got to have our guys competing at a high level for the 10 months of the year that surround the two months where you get to play for Australia.

In Australia, a lot of the focus is on building towards those major international tournaments. In Europe, they don’t focus on that until the tournament has nearly arrived, because it’s all about the clubs; there are no central institutes. The sole focus for the clubs is on winning games.

But where that is so beneficial for European players is the constant exposure to elite, high-pressure play. It’s a daily reality, be it in training or games. The time they spend with international teams is surrounded by world-class competition.

We’ve got five Aussies playing in Europe next season, plus a couple in America. Lots of boys are getting international experience to bring to the team.

I’m preparing for another season in Hungary. It has been a very rewarding time there so far.

I began playing water polo with Szeged in Hungary, winning the national cup twice. I spent one season with Jug Dubrovnik in Croatia, before moving back to Hungary.

There are still a few strong clubs outside Hungary, in countries like Italy, Spain, Serbia and Croatia.  But for the overall level of the league, Hungary is the strongest.

There’s been some government intervention to try to promote sport; specifically, to promote sponsors entering sport, with tax subsidies and other methods. There have been large investments in water polo and the Hungarian domestic league.

At Hungary’s Szolnok water polo club, I was part of a pretty amazing run.

We went two years straight winning nearly every trophy possible, including the Champions League in 2016-17. That was a great experience, especially considering we weren’t exactly favourites to win.

Yet we had five or six Olympic gold medallists in that particular team, and we always had at least five while I was at the club. It was great to learn from guys like Andrija Prlainović and ex-Serbian captain Živko Gocić.

Heading into that 2016-17 season, we’d won all the Hungarian championships but only gotten bronze in the Champions League. That season, we won everything, then another three or four trophies in the following six months.

That two-year period was quite spectacular – but all good things come to an end.

I’ve signed with a big Hungarian club, Ferencvárosi Torna Club, and we’ve relocated to Budapest. That’s me, my wife Anna and our son Russell.

Russell is about 16 months old. He’s running around and happy now, he’s at that beautiful age where he’s learning and listening – although he still ends up in the middle of the bed at night and throws a few judo kicks!

My new club contract runs up until the next Olympics. After that, I’ll re-evaluate where my career is at and whether I’ll keep playing. I’ll be 29.

I’ll move back to Perth eventually. I’ve got a commerce, accounting and finance degree from Curtin University, and I’m just finishing an MBA through the Australian Graduate School of Management at the UNSW. I’m looking at doing a Masters in either management or finance, starting in January.

Everyone needs to have that focus on life after sport, what they’re going to be doing when they’re older. Education is a hugely important part of that.