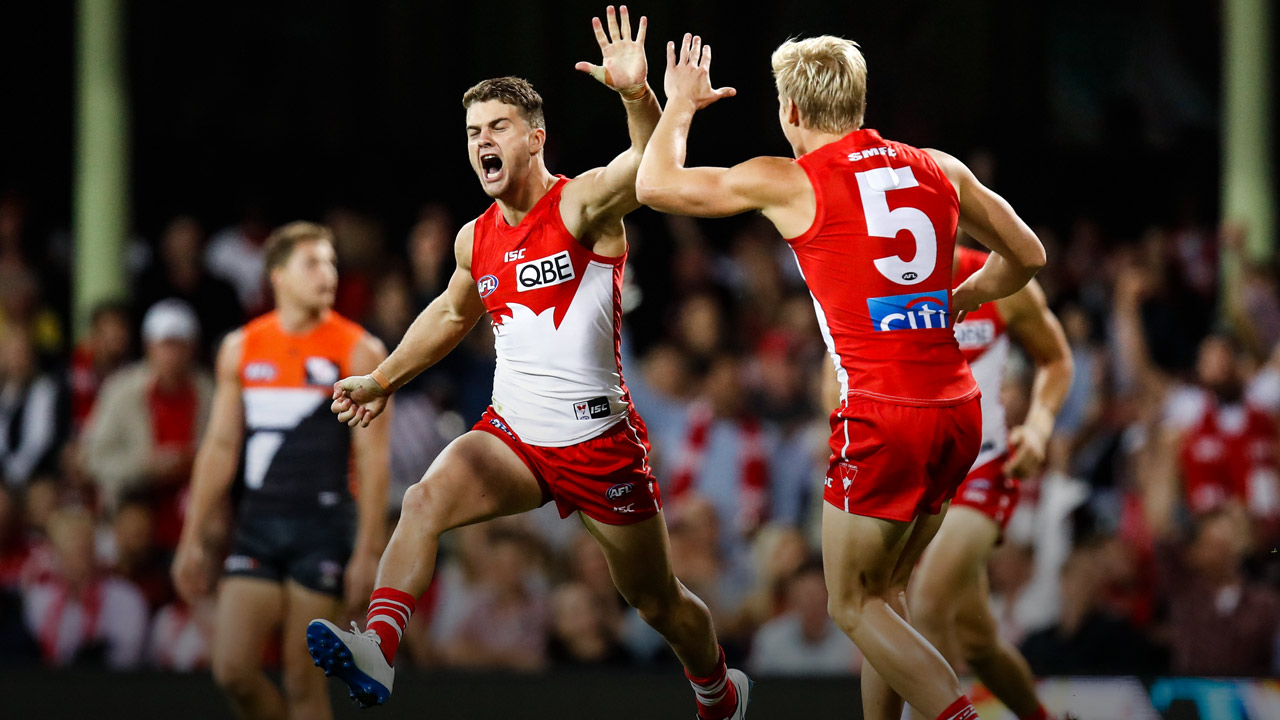 Drive past Garfield on the Princes Highway. Take a right down Abeckett Road. You’ll see a whole lot of trees in front of you. Go past those and you’ll arrive at the town of Bunyip.

That’s where I’m from.

There’s just the one main road running through town. There are two pubs. The Bottom Pub is at the bottom of the hill and the Top Pub is right where you think it is. There are a couple of pizza shops and an IGA as well.

Not far away you’ll find a couple of hardware stores called Larmax Trading. That’s been our family business for more than 30 years. It started with my grandpa, Max, and then my old man, Dave. I worked my fair share of shifts there, too, during school holidays.

I loved growing up in Bunyip.

When I was three or four, dad captained the local footy side to the flag. He played in the midfield and he reckons he was pretty tough. I was too little to remember much about that premiership season in 2000, but he’s done his best to remind me all about it through the years!

I was playing in the under 13s footy team from the age of nine. I was also playing cricket.

For most of my teens, I enjoyed my cricket more than my footy. I was an opening batsman, sometimes first drop. I was a pretty aggressive left-hander – I loved the way Dave Warner went about his batting – and I played in the under 15s Gippsland Power rep side.

I toured Barbados with the Wanderers club when I was 16. I got to visit Kensington Oval, but the games we played were on the smaller grounds around the island. We even played at Rihanna’s old school! The Barbados pitches were pretty different to what I was used to in Bunyip – nice and quick, they suited me – and being exposed to some of those Barbados fast bowlers was an eye-opener. They were pretty nippy.

We finished that tour with a game in Los Angeles against the USA under 19s team. I was loving it.

A year later, though, things weren’t going so well. I wasn’t scoring consistently and felt I wasn’t really getting anywhere. I was a bit sick of the game. I just wanted to have fun with my mates.

As a younger teen, I was a fringe footy player. I was a little bloke in the forward pocket and at that age it’s all about the bigger bodies. I didn’t get much of the ball.

But by 16 I’d started to fill out a bit. They called me up to the senior side.

That season was heaps of fun. We won the premiership. It was the first time Bunyip had won the flag since dad’s team. It was a big turning point for me. Footy was my No. 1 sport from then on.

We were down by seven points at three-quarter time in the granny. I kicked the first goal of the last quarter to put us within a point.

There were about 10,000 to 12,000 people there and everyone was going crazy. Garfield is our big rival and it was the first time in ages the two towns had played against each other in the grand final.

That goal to open the final term ended up being a momentum-changer. We sprinted away and won by six goals. Everyone ran onto the field. Dad was among them. He grabbed me and gave me a big hug. He said, ‘Enjoy it because these don’t happen all the time’. He only ever won the one flag.

My coach at the time, Callum Paddie, encouraged me to go further with my footy. It was the first time I’d thought seriously about the possibility of making a career out of it. I’d started a plumbing apprenticeship for Paul Willis, alongside my mate Shane Smith. That’s where my thinking had been to that point.

We played Garfield in the grand final again the next season. We’d beaten them by 90 points in the semi and everyone expected us to win the granny. We didn’t. They were too good on the day.

The next year I tried out for the Gippsland Power. I made it. By the end of that season, I’d started playing small forward and kicked a few goals. The Power asked me to come back the next year. There wasn’t much interest from elsewhere.

I didn’t get picked up by any AFL clubs in my first draft year in 2014. It was tough.

A lot of the plumbing work we were doing was in Melbourne, which meant getting up at 5.30am every day, driving 80-odd kilometres there, doing your work, driving back and trying to make training. There were some days where I couldn’t make training because I was still working.

At the end of that year, I moved over to Dean Moore’s company, Moore Plumbing. I loved my old job but the work here was local, not in Melbourne, which meant I could always make it to training. I figured if I was going to have a proper crack at the draft, it was time to put my footy first.

It was the first time Bunyip had won the flag since dad’s team. It was a big turning point for me. Footy was my No. 1 sport from then on.

It was a massive turning point for my footy. I had about 70 or 80 shots on goal that season and I could’ve kicked more. And there were a few nibbles out there. I had interest from three clubs – Collingwood, Essendon and the Swans.

I wasn’t very confident about Collingwood and Essendon around the time of the draft combine. The interviews didn’t go so well. But the Swans just let me talk. I really enjoyed the interview with them. I had a good feeling that something might happen with Sydney.

The 2015 draft came around and, like the year before, my name wasn’t called out.

I was pretty shattered.

I went straight back to work the next day, as much for the distraction as anything. I figured it was a good way to stay busy and keep my mind off footy and what had just happened.

Still, I had a little sense that I might get rookie-listed by the Swans. I don’t know why. It was just a feeling. They were looking for a small forward and Benny McGlynn was on his way out. And I still felt good about how the interview had gone.

I was on smoko. We were working on some stormwater drains in Buln Buln, out the back of Warragul. I went over to the car to check my phone.

I’d missed a call. It was from Kinnear Beatson, who heads up recruiting and list management at the Swans. Kinnear left a voicemail telling me the Swans were going to take me with their first pick in the rookie draft. I called him straight back to hear it straight from the horse’s mouth. I was over the moon.

Kinnear told me not to tell anyone. I rang dad straightaway: ‘They’re going to take me!’ Ryan Morrow was working with me that day and could hear a bit of a commotion, so he walked up and asked, ‘What are you doing?’

‘I just got told I’m going to the Swans’.

IN MY GRANDPAS’ FOOTSTEPS

You could say that the only reason I’m here today is because of the Swans.

That’s how my parents met, through their dads being good mates at the same club.

I had never seen Max cry in my life before my rookie draft, but he was bawling his eyes out that day. He could hardly get any words out! He was so proud of me. There’s a photo floating around somewhere from that day of me wearing his old woolly South Melbourne guernsey.

I was 19 and I’d never been to Sydney before. I was a bit nervous, leaving mum and dad and my brother and sister behind. Mum was alright at the airport. Dad was pretty emotional.

Alex Johnson and Nic Newman picked me up at the other end. They took me out to dinner for the new players and I met everyone there.

I stayed with Alex at first. Unfortunately, he got the bad news about his knee the next day. I stayed with Gary Rohan in Coogee just before Christmas and afterwards I moved in with Colin O’Riordan and Aliir Aliir in Maroubra. That was perfect. We all got on like a house on fire.

I couldn’t really believe it when John Longmire told me on the Tuesday before the start of the 2016 season that I’d be playing my first senior game against Collingwood.

To get the win against the Magpies was huge. A real dream come true.

Mum and dad, my brother and sister, a few good mates and my girlfriend were able to make it up for my first game. They were sitting up in the Churchill Stand. Dad said he was feeling a bit sick in the guts the first time he walked up to the SCG and saw those huge lights.

I think he was more nervous than I was!

When I look back over the journey, I can’t believe how lucky I am to end up at a place like the Swans. It’s an unreal club and I was extremely proud to have played my 50th senior game against the Lions in round 10 this year. I can’t wait to see how far we can go.